Tinto, beer and a plethora of tostas. It’s no wonder why Jurucha is a popular destination for evening dwellers | Alexandra Ronnestrand

Traditional to Modern: Ten Restaurants to get Five Classic Spanish Dishes in Madrid

With thousands of years of history, Spain’s colorful and lively capital of Madrid has a food scene that is guaranteed to be as rich and tantalizing as its long-established past.  With traditional dishes that have been done and redone in the sizzling kitchens all over Spain, Madrid does some foods best.

Find out where to eat five of Madrid’s most popular small plates, where they are served both classic and modern-style.  Here are 10 restaurants to enjoy during your stay in this sun-lit, fashion-filled, food-crazed city. 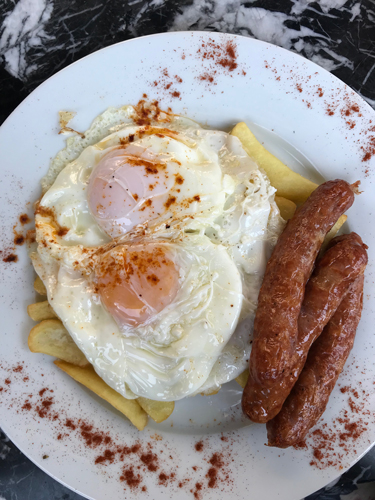 The classic huevos rotos served with chorizo on the side; a traditional version served at Mozzabar | Alexandra Ronnestrand

Huevos Rotos, or broken eggs, is a classic dish in Madrid.  Two eggs over easy, French fries cooked in olive oil and usually accompanied by chorizo or ham and sometimes even fish or shellfish.

This heavy meal is said to have originated in the Canary Islands but can be traced to mainland Spain in the early 1800s.  The classic dish served at most restaurants began as a poor man’s meal because of cheap but filling potato and use of whatever meat was in the home.

Mozzabar serves huevos rotos at lunch (12:30 to 3:00 p.m.), included in the menu del dia lunch special. The huevos rotos are simple and taste fresh, with yolky, over easy eggs that break gently over the fries which adds an additional element to the dish.  Something simple yet something savory.

Another option, Taberna las Botas has a delicious and refreshing take on the classic meal.  Here you can order a plate of huevos rotos with the typical French fries, egg, and meat, but with much more flavor added by the chorizo and ham. 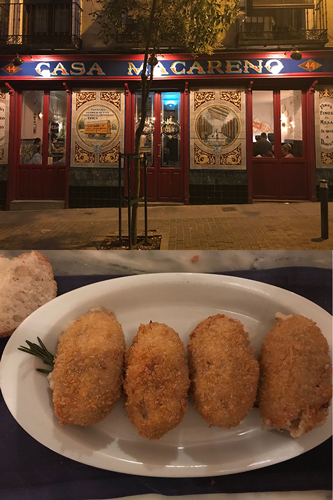 Casa Macareno lit up during the evening hours. Inside is packed with people there for the amazing food and vibes | Alexandra Ronnestrand

Maybe one of the most well-known tapas, or small dishes, served in Madrid, let alone Spain, are croquetas. While this dish is served all over the world in varied ways, Spain’s special version includes thick fried bechamel filled with ham and cheese.  But while that is the most traditional version, restaurants are starting to mix it up with oxtail, spinach and cream cheese, and other explorative fillings.

Get the traditional croquetas at Casa Macareno; they will not disappoint.  The popular restaurant is known for their patatas bravos, another classic tapa in Spain, but the croquetas make a run at the title.  While most restaurants have more compact fillings, like the consistency of little rolled dumplings, Casa Macareno make light, airy croquetas, almost creamier.  You will taste the ham and cheese explosion just as much. 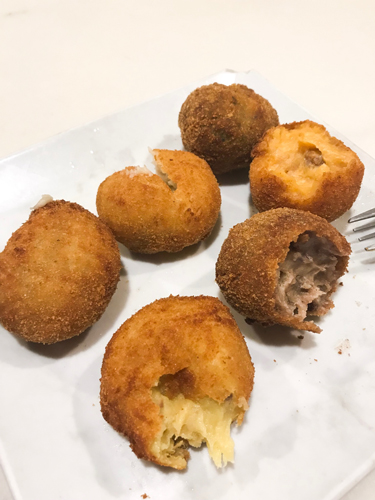 If you are looking for a variation of the croquetas, visit Casa Julio for your every choice.  There are seven variations offered, from black pudding or spinach and cream cheese all the way to the traditional jamón and cheese.  The place is packed full of people who know what amazing croquetas Casa Julio has to offer. 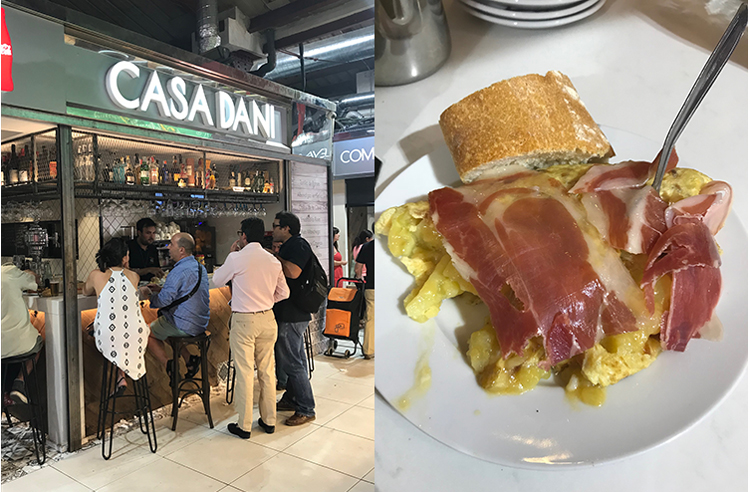 From opening till closing time, Casa Dani is a non-stop parade of customers, especially those in the mood for their delicious tortilla de patatas | Alexandra Ronnestrand

No matter what you call tortilla de patatas, everyone agrees that it is delicious.  The dish consists of eggs and potatoes.  Scandalous tortilla maybe includes some onion, but that is hush hush; the issue is widely controversial.  Legend has it that the dish originated in Spain during the siege of Bilbao, where a general created the mixed dish to fuel the army, fast and healthy.  Another tale claims the same general demanded that a farmwife make him a meal; she fed him what she had, eggs and potatoes with onion, and the rest is (maybe) history.

Cheap and good, there are few places you won’t be able to find this Spanish staple in Madrid.  One sure bet is Casa Dani, busy from noon to 7 p.m. when it closes, putting out over 400 tortillas each day.  The candied onion offered in the tortilla is beyond delicious and served with endless fresh bread.  Casa Dani is hailed as the place to go for the best tortilla; it doesn’t hurt that it is cheap. 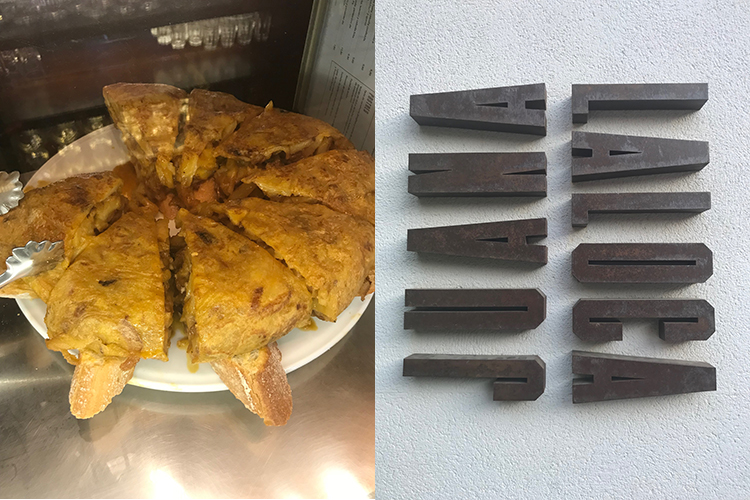 Many variations of tortilla de patatas are served in Madrid, but at Juanalaloca, there isn’t any tortilla like it | Alexandra Ronnestrand

Looking to eat as the locals do and have the classic version? Venture to the Juanalaloca where they have the classic dish along with many other traditional tapas.  The tortilla was everything but plain and with a consistency like pie.

Hardly any meal is more Madrileño than the Bocadillo de Calamares, or squid sandwich, served on a baguette.  In Zaragoza, a city east of Madrid, the sandwich is topped with a spicy tomato sauce, similar to the bravas sauce.  However, in Madrid, dishes are best served simple.  A squeeze of lemon or a dab of mayo may accompany the sandwich for some extra zest, but other than the simple additions, it is only golden rings of fried calamari on a baguette.

Plaza Mayor is the best place to get your traditional bocadillo de calamares.  Magerit, right in the plaza, is one of several places to find this Madrid specialty.  If you are used to flavored-packed sandwiches popping your taste buds, then this is not your sandwich destination.

“All the college kids come here towards winter break,” Marta Barcelo, 44, remarked.  Barcelo, who has been working at the Magerit for over a year, says Christmas is their busiest season.  Christmas or summer time, Magerit sells it all year round. 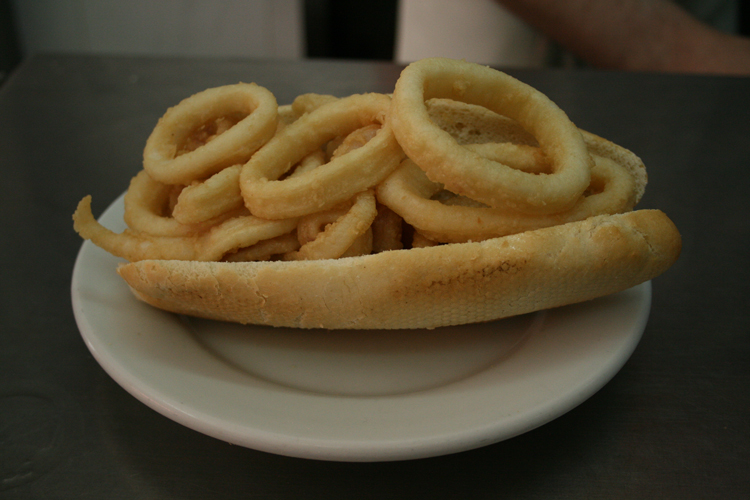 At El Brillante, the squid sandwich is unanimously one of the best in Madrid. With the added lemon and mayo, it is deceivingly so | Alexandra Ronnestrand

However, El Brillante, a restaurant opposite the Atocha train station, serves the sandwich with the added lemon and mayo, if you ask.  It may be the added zing of the lemon or the delicious bread served at El Brillante, but, whatever it is, the sandwich served here is beyond comparison with what other establishments offer.  It is definitely worth the visit to this popular place if the calamari sandwich is on your list.

Perhaps one of the best small plates are tostas.  Tostas are similar to an open-faced sandwich, which is usually a topping on a small piece of French bread.  Traditional style is salmon and brie, or jamón with onion on bread, but like all dishes, you can find some creative takes on this classic Spanish tapa.

If you are looking for a cheap beer or wine with some traditional salmon or ham tostas, stop at La Dolores, just a couple blocks up from the Prado Museum, sit down to a good portion of traditional salmon y queso tostas or the jamón.  Neither plain or complicated, you can really appreciate the sole flavor of the main element.

I cannot rave more about Jurucha, a place for every tostas: hot or cold, crab to vegetarian, sloppy to simple. Jurucha is a steal of a deal but includes much more than the traditional ham or salmon tostas.  The warmed crab tostas or the tomato chicken is fabulous and will have you coming back for more.

Unai Rubio, 31, a server at the popular destination, said his favorite is the warmed crab. “It’s very good because it is so fresh,” Rubio explained.

Madrid is a haven to cultures from all over Spain and the world, a city equally diverse in its cuisine as it is in its people.  Whether you are here to dine on tapas, sangria and local meals or looking for a variety of eats, every corner, every street has restaurants to stop into, but if ever wondering where to go, these restaurants are sure to please.