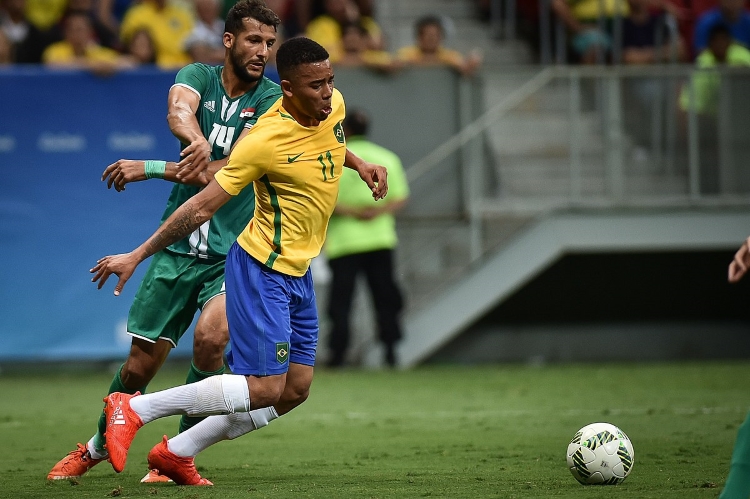 Surprises of the European Soccer Season So Far

In every sport, there are players who rise way above expectations, and players who fall below the level of performance that fans are accustomed to. This can also happen with the teams themselves. Soccer players and clubs are no exception: here are some examples from this season, as form has changed for better and for worse.

Krzysztof Piatek joined Genoa this season from Cracovia, and the Polish striker started the season in phenomenal form. He scored in his first seven Serie A games, collecting a total of nine goals in the process. At one point, the 23-year-old was the highest goalscorer in all of the top five leagues in Europe. In addition, he scored four goals in the span of 36 minutes against Lecce in the Coppa Italia, and he scored his first goal for Poland in only his second appearance for his national side. 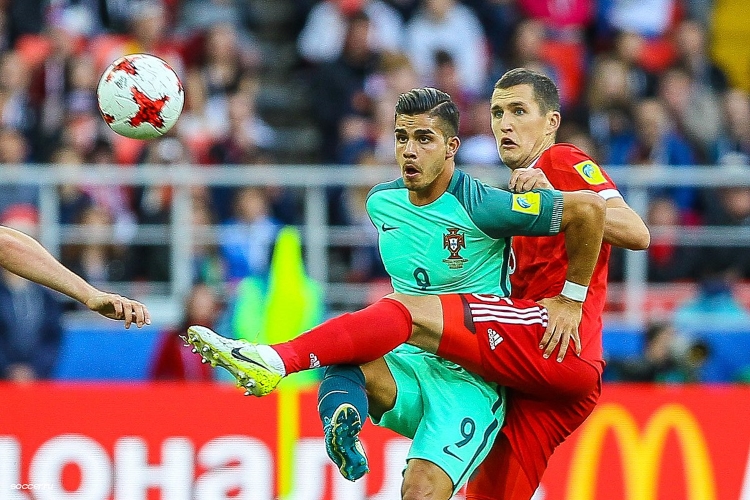 Andre Silva came to Sevilla this season on loan from A.C. Milan, where he struggled to make the impact expected when he made the switch from Porto to the Rossoneri the season prior. In Milan, he only managed to score two goals in 24 appearances in the Serie A. Despite this poor form, Sevilla trusted in the Portuguese striker, and it has paid dividends. In ten appearances in La Liga, Silva has scored seven goals. His performances have propelled Sevilla up the table, finding themselves in third place, only two points behind league leaders Barcelona as they enter game week eleven. 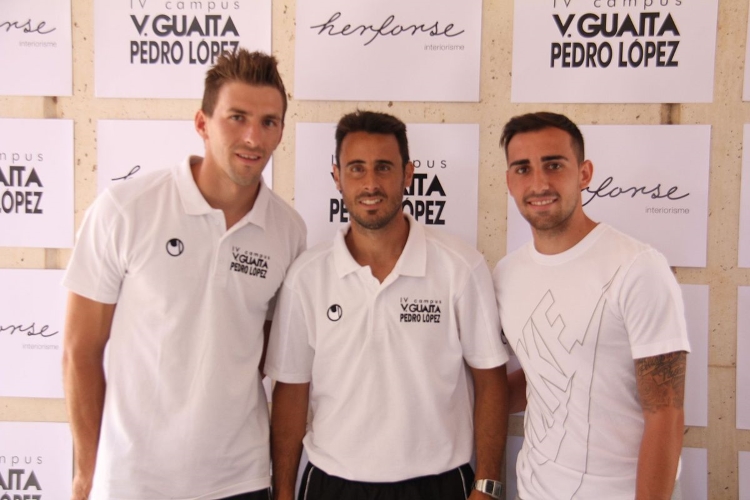 Paco Alcacer was loaned out to Borussia Dortmund this season from Barcelona. At Barça, he didn’t feature much and only managed four league goals in 17 appearances last season. However, he has been on fire in the Bundesliga, producing mind-boggling goals per minute ratios. This season, Alcacer has scored in every game he has played in for club and country before the start of round ten in the Bundesliga. In the league, he had only started once and came off the bench on three other occasions; yet he still managed to score seven goals. Two goals were scored in the last nine minutes of a match against Bayer Leverkusen, one of which was the game winner, and he scored a hattrick off the bench against Augsburg – with the last goal once again a winner, scored in the 96th minute. He scored in his only appearance in the UEFA Champions League against Monaco, and he scored three goals in two games when he represented the Spanish national team last month.

Gabriel Jesus seems like he hasn’t been the same since this summer’s World Cup. He went with Brazil as their starting striker and he failed to score a single goal. Leading up to that, he had scored 13 goals in the Premier League for Manchester City with limited game time, which makes sense considering he is competing with Sergio Aguero. However, this season he only has one league goal in nine appearances. Granted, most of these appearances have been off the bench, but Jesus’s impact hasn’t been the same as last season. Before he added something different to Manchester City’s attack, but now he is failing to perform to the level expected of him. 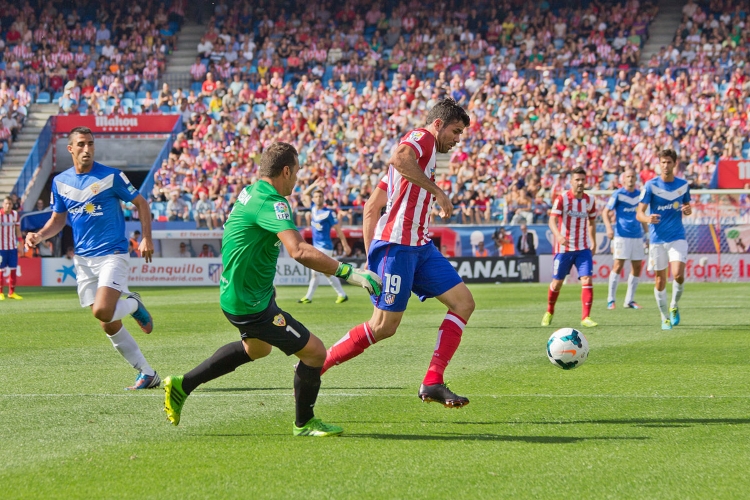 Diego Costa is a shadow of himself these days. The Brazil-born Spaniard hasn’t scored a league goal since February of last season against Sevilla in a win away from home. Costa rejoined Atletico Madrid in January of last season because of the club’s transfer ban – and his stubborn desire to join the Colchoneros once it became clear he wasn’t wanted at Chelsea. During that season, he scored seven goals in 23 appearances. Despite not playing for half the season after being frozen out at Chelsea, Spain thought his performances were good enough to merit a spot in the World Cup. There he scored three goals and he started all their games. In his first official game for his club this season, he scored an impressive brace against Real Madrid in the UEFA Super Cup to win the trophy. Many hoped this was a sign that Costa’s best form would once again emerge, but it hasn’t. In his following eleven games, he has only scored once and hasn’t been called up to represent Spain since the World Cup. 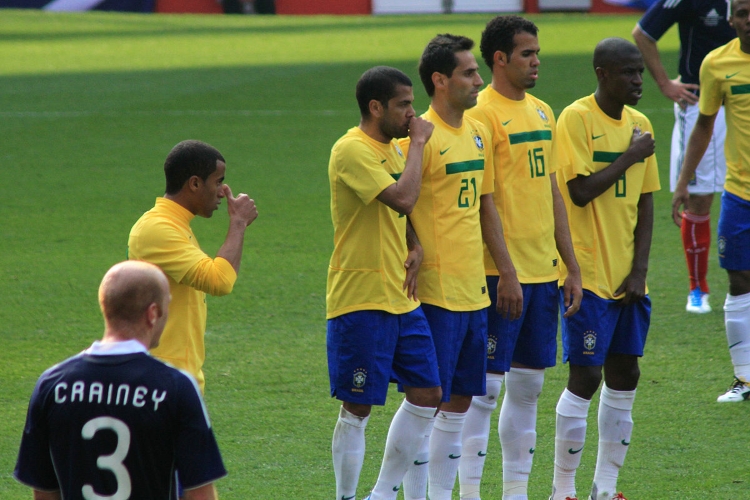 Age seems to be finally catching up to Jonas as he struggles for goals at Benfica. Last season, the Brazilian forward was in astonishing form, to say the least – he scored 34 goals in 30 appearances in the Primeira Liga. Scoring such a high number of goals even though he was injured during April is an incredible feat. To put this into perspective, he scored the same number of goals Lionel Messi did in La Liga, the most league goals in Europe that season. However, this season has been a far cry from his amazing form from last season. He’s lost his spot in the starting eleven and has only featured four times in the league, scoring once. At 34 years old, perhaps this is signaling the beginning of the end for Jonas as he nears the final moments in his career. 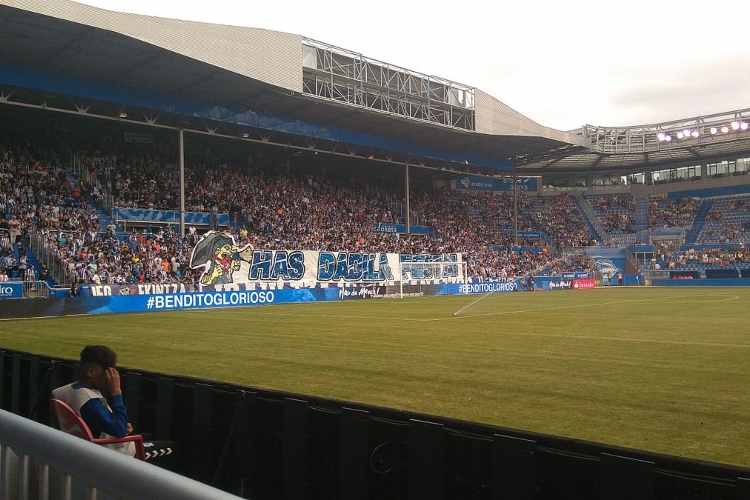 La Liga has been very strange this season, as it has proved to be very unpredictable. One reason for that is the great start to the season by Deportivo Alaves. The Basque club have risen to prominence in Spain over the years, and their story is truly a special one. They were relegated to the third division in the 2007-2008 season, only seven years after they were in the UEFA Cup final against Liverpool. After four seasons, Alaves finally earned promotion into the second division in the 2012-2013 season. Three seasons followed before they made it back into the first division. After game week ten, they found themselves in second place in La Liga, only a single point away from league leaders Barcelona. At the beginning of the season, no one would have imagined they’d be in the top four by this stage – let alone a point off the top spot. Although no one believes they’ll finish in second, if they can keep up their form, they could potentially end the season in a UCL place, especially considering the struggle of other teams that would usually be favored to finish in the top four.

Lille are currently second in Ligue 1, much to the surprise of anyone familiar with French football. Les Dogues have historically been one of France’s top clubs, but last season they finished in 17th place, just a single point above the relegation playoff spot. Such a change from one season to the next is unique, and Lille are certainly experiencing that now. Players such as Jose Fonte, Jonathan Ikone, Jonathan Bamba, and Nicolas Pepe have been critical to the club’s improvement this season. The impressive attacking talent of Bamba, who has scored seven goals and given one assist, and Pepe, who has eight goals and five assists, have been integral to Lille’s offense this season. If they can maintain their performance levels, a UCL place is certainly not beyond them. 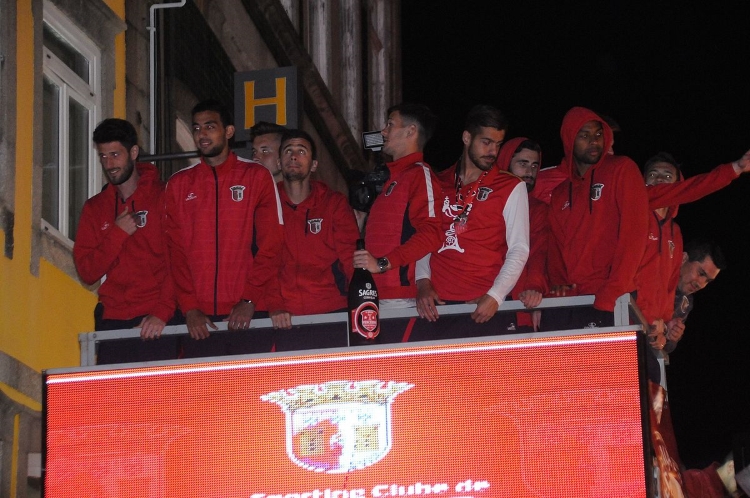 In Portugal, there are usually three clubs expected to push for titles – Porto, Benfica, and Sporting Lisbon. The first two are usually the most competitive, often leaving the latter to be content with a third-place finish in the league. Their closest challengers have frequently been Braga, finishing fourth all but once since the 2014-2015 season. Yet, after nine games in the Primeira Liga, Braga found themselves tied for top spot along with Porto. Additionally, they remain the only club to still be undefeated in the league. With Benfica and Sporting Lisbon dropping more points than one would’ve expected, Braga will be hopeful they can finish in the top two and get a UCL spot. Given Sporting’s off-the-field issues, which led to some first-team players – like starting goalkeeper Rui Patricio – leaving the club, Braga can certainly push for a third-place finish. However, even the most optimistic of Braga fans won’t believe that is possible. The league table in Portugal is definitely one to keep the eye on. 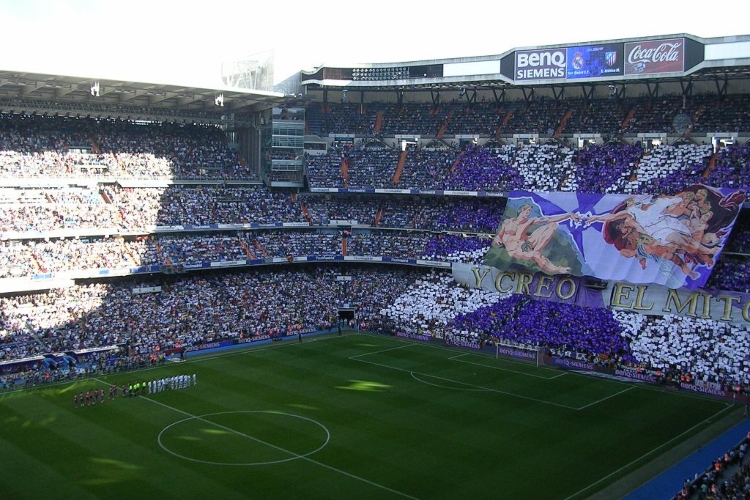 The club that immediately springs to mind here is Real Madrid. One of the biggest clubs in the world, Los Blancos have extremely high standards when it comes to results. Real Madrid were in tenth place when match week ten ended, with 14 points from a possible 30. They’ve lost four games already, only two less than they did by the end of the league last season. A team that usually doesn’t struggle for goals went through a period of 481 minutes without scoring. They finished in third place in La Liga last season, but they won their third UCL trophy in a row. However, both their coach Zinedine Zidane and their superstar Cristiano Ronaldo left the club afterward, and that has contributed to their struggles this time around. Former Spanish national team coach Julen Lopetegui, who was named Real Madrid’s new head coach before the World Cup, has already been sacked. Santiago Solari has come in and the club will hope he can steer them back on track to their usual standards. 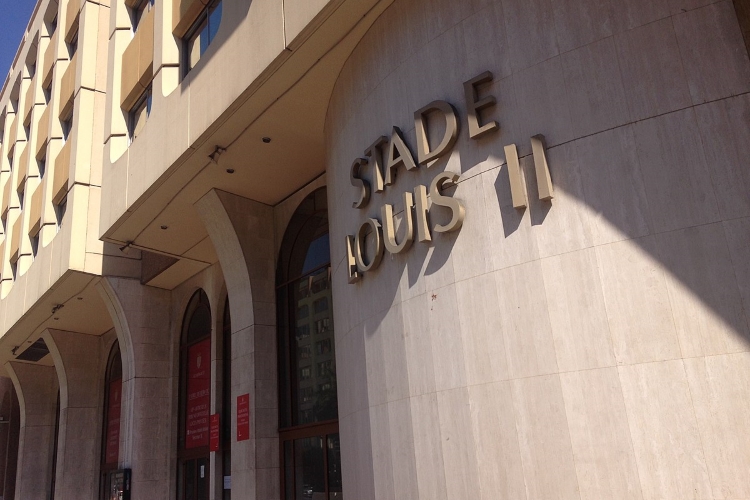 Monaco have been a real force in Ligue 1 since their promotion in the 2012-2013 season. Since then, they have won the league once – reaching the semifinals of the UCL in the same season – finished second twice, and finished third twice. Despite their clear ability, they are in 19th place and at the bottom of their UCL league group containing Atletico Madrid, Borussia Dortmund, and Club Brugge. Coach Leonardo Jardim has been fired and has since been replaced by Thierry Henry. In five games, however, the World Cup winner has failed to coach his team to a single win. Although the team has a very strong squad in comparison to most of Ligue 1, relegation can become very possible if results don’t start going their way. For a club that finished second in the league last season, demotion would certainly be a beyond-shocking turn of events. 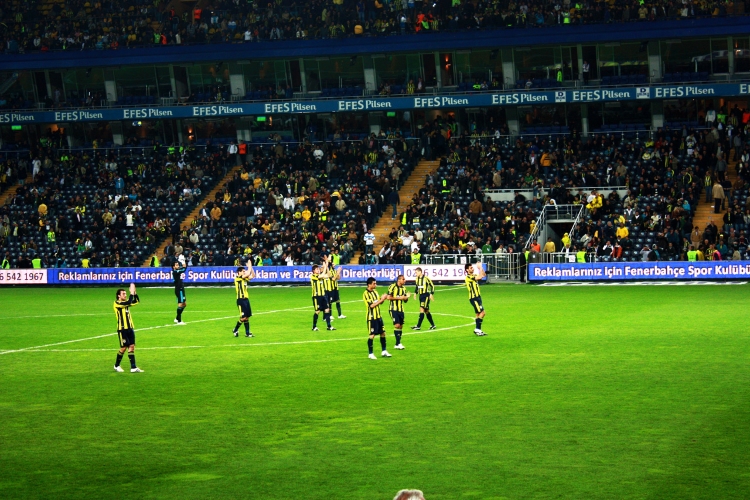 Fenerbahce players showing their appreciation to their fans | Serhat Gocumen

In Turkey, they have a similar situation to Portugal, where there are three big teams which usually occupy the top three positions in the league – Galatasaray, Besiktas, and Fenerbahce. But perhaps one of the biggest surprises in Europe comes from Fenerbahce. After ten league matches, the club found themselves in 15th place, just two points ahead of last place. They had the third-worst goal difference in the league at -6 and lost half their games. With talent that has played at some of the biggest teams in Europe – like Martin Skrtel, Mauricio Isla, Mathieu Valbuena, Andre Ayew, and Roberto Soldado – their league standings are simply astonishing. Given the stature of the team, any finish outside the top three would be unacceptable, let alone 15th place. Fenerbahce hasn’t finished outside the top three since the 2008-2009 season, when they ended up in fourth, finishing third once, second six times, and winning the league twice since. Coach Phillip Cocu, who was appointed in June, has already been sacked.