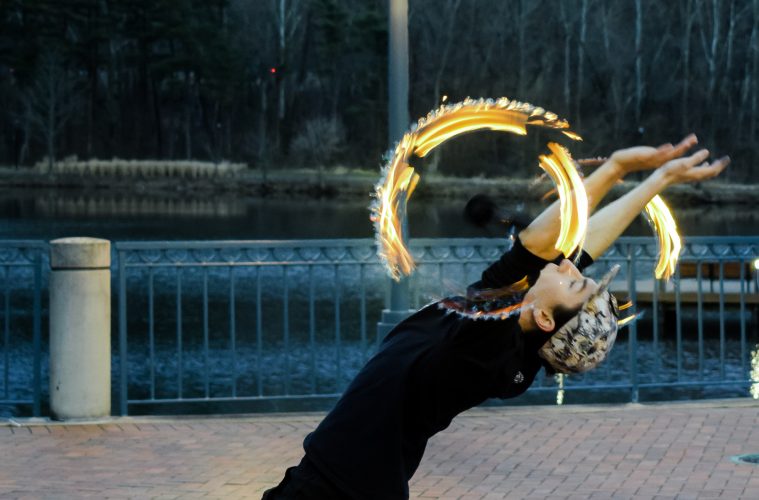 Imagine balancing various objects on your body while they are simultaneously burning with flicking flames. Meet Austin Russell, a 20-something-year-old practicing flow artist who does precisely that. Astonishingly, the fact that he is a burner (a flow artist who works specifically with fire) is secondary to his high level of mastery achieved in only three months of immersing himself within the practice. For those who may be unfamiliar with the term, flow arts, as the name states, is an art form that encompasses a wide variety of objects known as flow toys that are manipulated by the artist through intricate techniques to create an emotive dance. 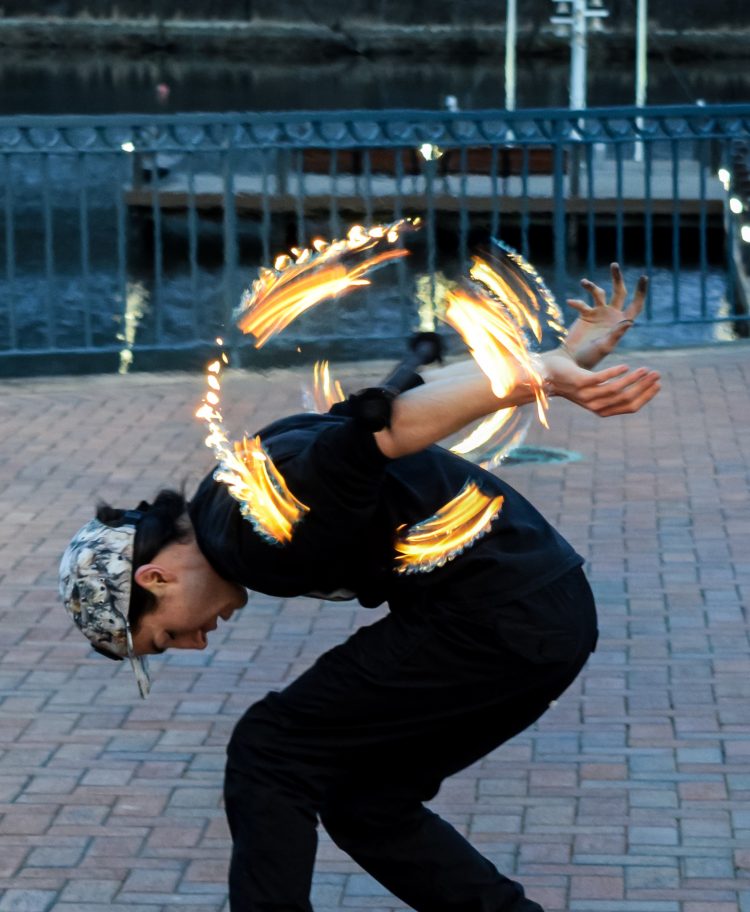 My first encounter with Russell was on a leisurely stroll through a local park one evening when I was drawn to an overwhelming, out-of-place smell of gasoline and smoke. This wasn’t the normally-calm atmosphere of the suburban oasis. In fact, there was a certain apprehension and excitement of curious onlookers mixing in the air along with the acrid smells. With the sky a bluish-purple as the day prepared to shift to night, the most peculiar contrast appeared against the setting sky.

A fast-paced, euro-dance music echoing from a portable boombox only added to the buzz of the murmurs in the crowd. The features of this young man’s face were rapt with an expression somewhere between calm and confidence. His eyes, however, shone sharp and keen as they followed the eight-pronged, fiery dragon staff as it ebbed and flowed over his arms, back, and legs. Entranced with the rest of the crowd, the only plausible thing to do was to photograph this mystery that was Flow Art.

What inspired you to explore Flow Arts?

Back in October, I went to a music festival with my girlfriend and saw this burner. I remember after watching him perform, I thought to myself, “I could never do that!” It wasn’t until my girlfriend convinced me to try it that I began practicing with an unlit staff. After a few weeks of getting used to balancing the weight of it on my body, I gained the confidence to practice with fire.

So you have been practicing for only a few months then, correct?

What are some of the challenges that come along with being a flow artist? 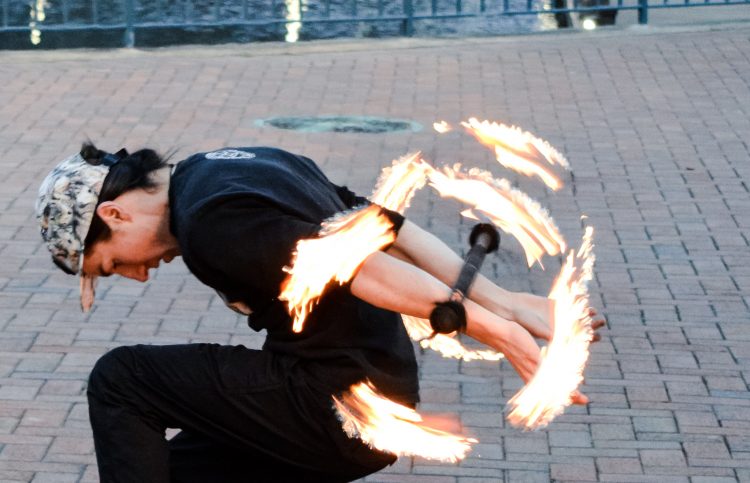 If you noticed while I was burning, I didn’t use my right arm that much. That is because I was born feet first, causing the nerves in my right shoulder to be so severely torn that I had to have immediate surgery to fuse them back together, which left me with limited mobility. I can’t turn my arm to have my palm facing upwards, so I’ve had to compensate by doing tricks that are within my range of motion. I’ve also noticed that I have increased the mobility in my right arm, so you could say that being a burner has become a form of rehabilitation and neurogenesis.

What are some qualities that helped you to get to where you are now?

I think my open-mindedness and courage to pursue flow art combined with my determination to learn the art of burning has really paved the way for me to express myself.

I imagine working with fire is no easy task. What was the scariest moment you’ve had? 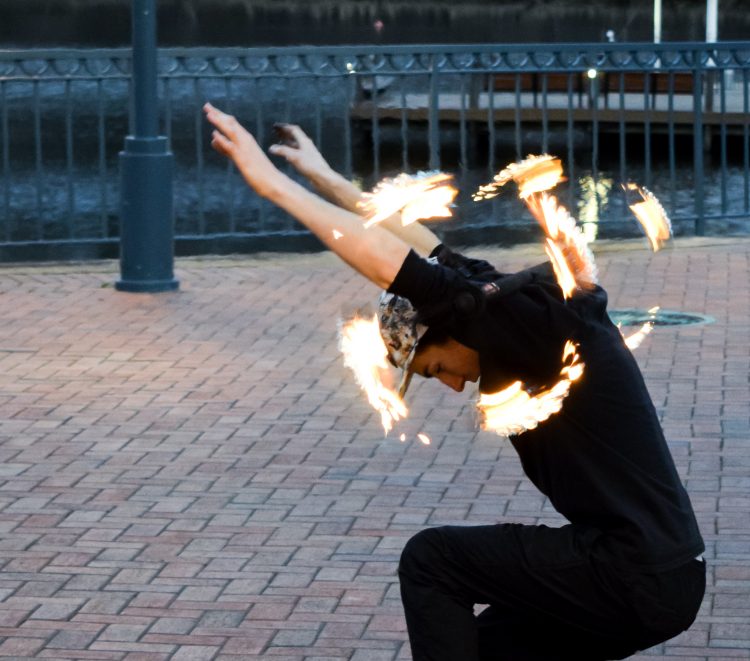 Yes, there were two actually! The first was a solo performance I did, which is completely unsafe because you need another person to help you if you ever caught on fire. In my case, that’s exactly what happened. While practicing, I started to notice a stronger than normal smell of smoke and this strange surge of warmth that quickly turned into heat. When I looked down at my shirt I saw that flames had begun to engulf my shirt and without thinking I ripped it off and was able to suffocate the fire. I’m really glad I didn’t get burned!

The other experience was when I was practicing with a lit dragon staff (an eight-pronged staff pictured above) and one of the pronged ends hit me right in the face, literally just inches away from my eye. That was probably one of the scariest moments I’ve had so far because I could have gone blind in that eye.

Going forward, what do you see yourself doing? What are your goals?

I am actually planning a bi-weekly, nonprofit meet-up group this summer to connect those in the flow arts community and to help introduce the art to the general public with free performances. I am very passionate about creating this meet-up group without any membership fees because I don’t want anyone to have to pay to do the things that they love. The group will survive mainly off of tips that we earn during performances to help fund different activities. Between my girlfriend and I, we have accumulated a lot of flow toys that we will donate to the meet-up.

What would you tell someone who is interested in flow arts but doesn’t know where to begin?

The best piece of advice I could give to someone would be to reach out and make connections with others in the flow arts community. By doing this, you can learn so much about the art and the different techniques used by other experienced artists. Another tip would be to take your time and have patience. Start off by just playing with flow toys to get used to the weight and how it moves across your body. From there you can move on to bigger and heavier toys and eventually introduce fire into the mix.

What have you discovered about yourself along this journey? 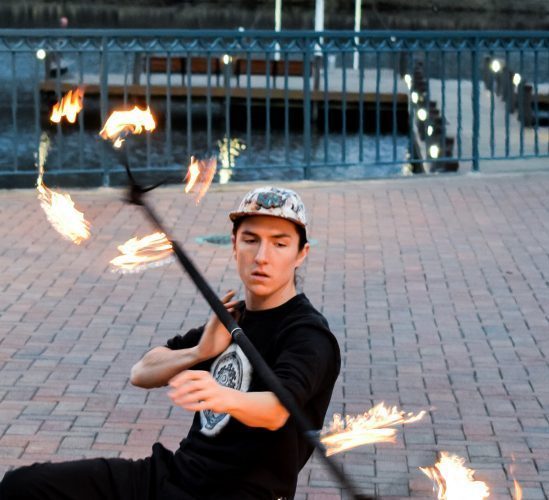 I would say I have become a more confident person, and I don’t care about what people think about me anymore. Flow arts has given me an inner peace that helps me cope with my depression and anxiety. I perform not because I want to show off my skills, but because I want to show the world my art. In the flow arts community, we have a belief that flow toys are more like “flow tools” because they really help to center ourselves emotionally.