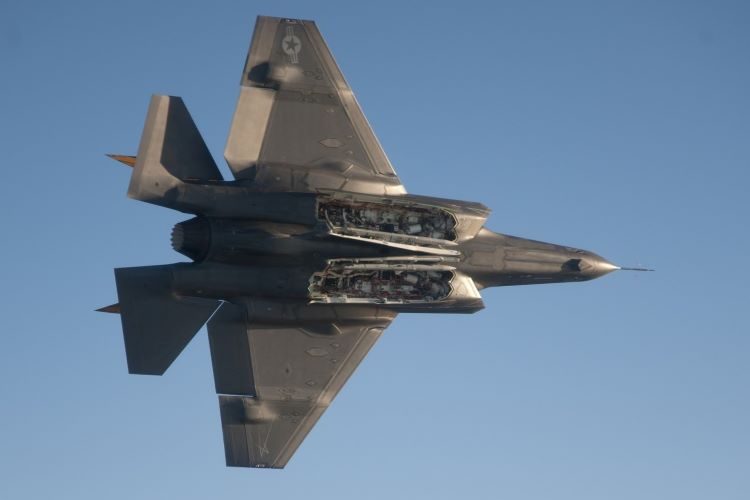 Freedom of the press is one of the main requirements to make a country a democracy. Indeed, media is the 4th power in a democratic regime alongside the legislative, executive, and judiciary powers. However, freedom of the press can have downsides for national security in specific cases.

An excellent example of this are the weaknesses related to the most expensive jet fighter program of all times, the American F-35. It can also be beneficial to compare countries with a free press to countries that have high levels of media restriction. The recent man hunts following terrorist attacks in France and Belgium also demonstrate the role of the media in contemporary democracies.

The most-expensive jet fighter program so far in military history is the Lockheed Martin F-35. The F-35 was born as a fifth-generation fighter jet with multi-role capacities. This fighter is innovative in the way that airspace is framed, along with changing how planes interact between each other as a digital ecosystem. The press raised critiques on how the program evolved and doubts about its military capacities.

First, the initial budget of the program skyrocketed out of control, reaching a figure of $1.5 trillion over the 55-year lifespan of the program. Delays were huge, and cost-cutting decisions ultimately had to be taken. This meant giving up on advanced systems that would give higher capacities to this multi-role jet fighter. Security budgets are now kept tighter than during the cold war, and there is a harsher selection on which programs to launch. The F-35 issues and budget consequences were seen as a disaster in the public and experts’ eyes.

Second, the plane encountered many reliability issues. It is normal for publicly funded programs to face scrutiny regarding how public budgets are being spent. This also gives precious indications abroad about operational weaknesses. For example, the navy version of the F-35 did not reassure military experts about its capacities to be ready for combat. Additionally, it appears to be unreliable against cyber attacks.

Reliability issues hit one in four test-planes requested by Switzerland before they signed an order for a renewal of their fleet. The same planes arrived to Europe delayed from their US base because of refueling issues. Reliability issues grounded planes in the Netherlands and in Japan.

Russia, China, and North Korea versus Europe, USA and UK

There is a difference in the way that democratic and non-democratic countries communicate about their military capabilities. Let’s take a look at two groups of countries, the first being is Russia, China, and North Korea, and the second being the European Union, the USA, and UK (still in the EU so far).

Group one is putting forward major advancements in technologies that they hope will catch up to or defeat their enemies’ system, while group two has a press with much more freedom. Governments usually release official statements that highlight the improvements of their military forces and technologies at their disposal. However, there are press investigations, and the armed forces are obligated to comply with accountability under public scrutiny.

Russia largely downplayed the issues with its aircraft-carrier Admiral Kuznetsov. Russia claims that that their S-400 missiles shield is the most advanced defense weapon available. China is proud to announce that they are on good track to achieve a sixth-generation jet fighter program. It is planned to outrun the F-35 capacities within its lifespan. North Korea regularly sends warnings to the world about its nuclear capabilities and the increased range of its missiles.

US press was getting louder and louder about budget overruns by the F-35 program, and it is not the only program that has been under fierce criticism in the media. We can take, for example, budget overruns of new littoral combat ships.

In the UK and the rest of the European Union, budget overruns are often pinpointed, but the press tends to restrain itself a bit more when disclosing operational or technological secrets that could potentially be useful in enemies’ hands. US press and specialized media even publish articles explaining how North Korea could still defeat the technological superiority of the US military with its half-century old jet fighters from the Soviet Era.

Press is not just about investigation in 2019. Uninterrupted flows of information are the standard for some media, as breaking news is journalism gold. During the Paris terror attacks of November 2015, the 24/7 information channel BFM TV was at the center of public criticism for its coverage of the events.

BFM TV was accused by special forces officers to have been in the way of their anti-terror operations, slowing down the victory of police forces on Islamic terrorists. In the aftermath of these attacks, the chase of the only surviving terrorist, S.A., was complicated by the media when they released information revealing where police forces were searching for him.

However, this is not a new problem for police forces to deal with. During the terror attacks in Mumbai in 2008, trapped victims contacted outsiders using cell phones. In the meantime, they accidentally gave away their location to terrorists. Journalists jumped on this bit of information, as nobody knew what was going on inside the Taj Mahal hotel. Additionally, the coverage of the attacks during the 1972 Olympic Games in Munich had similar patterns.

Freedom of the Press and Quality of Life

Freedom of the press is not as bad as it may seem according to this article. Indeed, the countries that perform well in the Freedom of Press index are the same countries that are at the top rankings on human development, happiness, and well-being. Finland, where the freedom of press index is the second highest in the world, was labeled as the happiest country in the world. Non-democratic countries mentioned earlier (China, North Korea, etc.) tend to also have low well-being indexes.

The information given by the free press is valuable to the functioning of democracy, but it is also valuable to other countries. The propaganda of Cold War times has ended in Western democracies, but free press is again under pressure with the rise of fake news and beliefs in conspiracy theories amplified by social media.

However, there are examples of countries properly addressing issues that have to due with immediate news coverage. Brussel’s police found a positive solution to this issue by asking Twitter to put up cat pictures instead of videos of ongoing police operations in the Belgian capital that was hit by terrorism in March 2016. As terrorist attack coverage has recently showed, media must try to find the right balance between the rapid release of data while addressing security concerns about disclosing certain information too early.