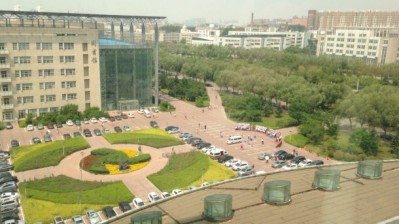 “I pledge allegiance to the flag of the United States of America,” the American kid recites in school.

“Journalism is the throat and tongue of the Communist Party,” the Shanghai University student writes into her journalism assignments.

Welcome to Freedom of Expression in a rote world, and welcome to a brief and personal history of restrictions on a free press from an American journalism professor at the University of Kentucky.

For a glimpse into China’s surge in international communications, please turn to a companion piece, “Part I: A Chinese View,” written by lecturer Zhang Siqi, who teaches international journalism at Jilin University in Changchun, China.

For now, sit back and reflect on how China’s voice in a noisy news media world can be heard through a quick content analysis and seen through a historical perspective, including echoes of early America, Francisco Franco’s Spain and the Basque conflict, and Vladimir Putin’s Russia.

Spoiler alert: If you are looking for a clear picture of China, you have never been there. Any time you hear “China,” ask yourself: which one? The rich one or the poor one, the urban one or the rural one, the coastal one or the one inland.

China is too big and complex, too old and too new, to be confined to one view. Or, as I was told after making a simple request on my first visit to China, “It’s complicated.”

So, just for fun, let’s take a peek at front-page newspaper headlines from the New York Times and the Chicago Tribune on the same days for three weeks in July and compare them with the People’s Daily, an official government paper with Chinese headlines, and China Daily, the largest English-language newspaper in China. Both Chinese papers are based in Beijing. 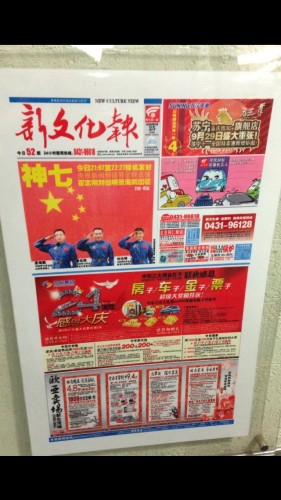 The content analysis was conducted by Associate Professor Liu Xueyi at Jilin University’s College of Journalism and Communication, using front pages from July 1 to 21, 2014, displayed on the Freedom Forum’s Newseum website.

The study involved 41 headlines with U.S. or Chinese references, 22 headlines in the Chinese newspapers and 19 in the American papers. The study shows the Chinese newspapers focused on the U.S. twice as often (8 headlines) as the U.S. papers mentioned China (4 headlines). The Chinese papers made U.S. stories a top news item 5 of 8 times compared with the New York Times making stories about China a top item 2 of 4 times. No Chicago Tribune headlines mentioned China.

Leave it to China Daily to balance celebrity with sobriety with headlines ranging from “China film ‘goddess’ to tie knot with her Korean director” (July 3) to “China, U.S. aim to cleanse lingering wounds with high-level dialogue” (July 10).

Thanks to professor Liu’s analysis, we can hear the loud voice of the New York Times in America on international news (17 of the 19 headlines, only 2 from the Chicago Tribune) and the formal voice of China through the People’s Daily (“A grand gathering is held to mark the beginning of the 77th anniversary of the Chinese People’s War of Resistance Against Japanese Aggressions in Beijing; Chinese President Xi Jinping attended the ceremony and delivered an important speech”).

I tell people I’ve never been to China; I’ve just been to Shanghai several times. No joke: If you follow news coming from China, you are most likely to see or hear a Shanghai dateline.

That’s because history matters: Russians fled to Shanghai after the 1917 revolution, and before World War II the city brimmed with British, French, Americans, and Germans engaged in trade, finance, and investments.

In 2010, when I became the first University of Kentucky journalism professor in residence at Shanghai University, I was confronted with questions about Freedom of Expression.

Tough to say, I would tell the students, as I have no fluency in Mandarin Chinese, I have spent precious little time in China, and I honestly believe you, the students, have more knowledge and expertise on the topic than I do.

Not to disappoint (after all I am a professor), I ended up giving answers that were either philosophical, historical, or personal.

Philosophically, I told the students, journalists from every era and on every continent have been forced to deal with restrictions. That does not mean that great journalism is impossible, only that it is extremely difficult and its results are often incremental.

Historically, in America seven short years after the First Amendment was ratified in 1791, President John Adams signed into law the Alien and Sedition Acts. Soon newspaper editors were tossed into jail for publishing articles critical of the president.

Today, in America, journalists face restrictions, not from the government but from financial limitations, especially the devastating newspaper layoffs and budget cuts that have undermined their watchdog roles to thwart corruption.

Personally, I’ll never forget when in the mid-’90s professor Juan Antonio Giner asked me to join his Innovation Media Consulting group. Over dinner one night he regaled me with stories of when he was a newspaper editor in Spain under the iron fist of dictator Francisco Franco.

His paper needed to pass through government censors before publication, and sometimes it would be published with black spaces where news used to be. If staff members had time to fill the holes, they would print the nursery rhyme “Mary Had a Little Lamb.”

If he was doing a great job, he might get a knock on the door in the middle of the night, encouraging him to flee to Paris before he got arrested by Franco’s henchmen. So journalists dealing with government restrictions is nothing new.

Consulting in the Basque region of Spain gave me a new appreciation of journalists dealing with restrictions. That’s when the terrorist group ETA was still operating, kidnapping wealthy people and demanding payment for their release.

Over lunch one day, I was talking with a newspaper editor about a story idea: Let’s compare the treatment of ETA terrorists in government custody with the terrorists’ treatment of kidnap victims stuck in a hole.

“If I do that,” the editor told me, “they will burn down my newspaper building.”

You see, journalists must deal with all kinds of restrictions, not just government limitations.

In Russia, the situation for journalists can be more subtle or more brutal. Over two weeks in 2010, I traveled to journalism conferences or workshops in three time zones, always returning to Moscow for my next trip. Whether I was in Kirov, or Rostov-on-Don, or in Barnaul, in Siberia, the opening remarks were always delivered by the government handler.

On one visit to the Moscow headquarters of the Russian Union of Journalists, I walked down long, winding hallways with framed photos of journalists on the walls. When I inquired whether they were in a Hall of Fame, my translator, who covered the conflict in Chechnya, explained that they were all dead. She told me that she once had a nightmare that she was walking down the hallway and saw a framed photo of herself.

Just like in color theory, the picture of China’s news media today can look different in light of red, white, and blue, whether those colors represent the American flag or the Russian flag.

I pledge allegiance to the notion that the only thing certain is change, and that means China’s voice in a noisy news media world will grow only louder.