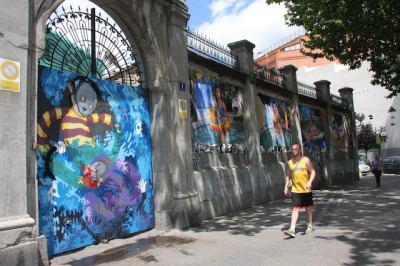 The locked gate opens from inside, exposing a graffiti garden in bloom.

Welcome to La Tabacalera, an old government-owned tobacco factory turned unofficial community center in Madrid, where people rich in colorful talents and aching for a voice come together under a collective name.

Currently under the supervision of Spain’s Ministry of Culture, this self-managed social center is a haven for the internally passionate, where arts and knowledge are shared from one hand to another. It is a jungle gym for the creative, a portal of possibility for the activist, and a stacked farm for the hungry. 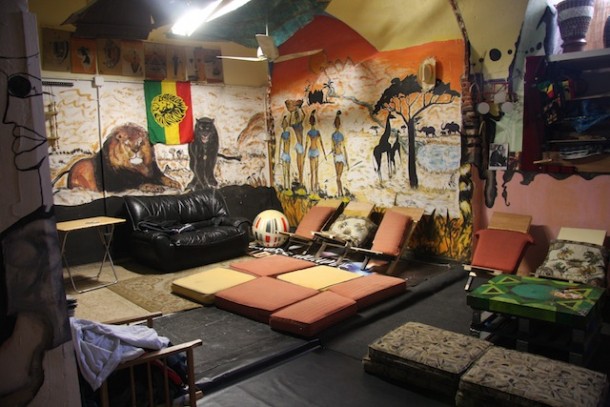 Built in 1790 as a project from Carlos III, the king who joined with France to help the U.S. free itself from British rule, the building was first intended to create liquors and playing cards. Later, in the early 19th century, La Tabacalera became the headquarters for the Madrid Tobacco Factory.

The tobacco factory was also one of the only consistent places that would hire women. A large riot in 1830 birthed the rebellious ghosts that still linger in these halls, as citizens today become possessed with the same revolutionary spirit.

After a century that witnessed wars and the Franco regime, tobacco production closed down in 2000, and the abandoned factory loomed isolated over Embajadores. Then, in 2010, it was reopened under Spain’s cultural sector as “El Centro Social Autogestionado” (self-managed social center; for more information on the mission and history, click here). 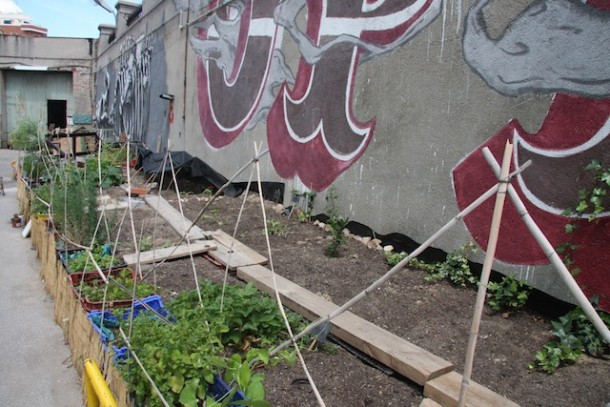 Inside the central nave, nearly empty and stale, a circle of dancers takes part in combative form. Two revolving participants attack each other in an exaggerated series of slow motion kicks and punches, while the other evades in a fluid, natural order – with the ground breathing up through their fleshy trunks.

A girl with a half-shaved head of dreadlocks claps in the circle next to a small Arabic man, synchronized to the created beat. In a sudden she leaps into the circle in exchange for another dancer. They perform without audience, exercising without immediate profit – all for celebration’s sake.

A different room in a different tower houses jugglers and trapeze artists who are practicing for an upcoming circus show. Upstairs, a large man with a tightrope walker’s grace teaches a group how to dance salsa for free.

Everyone is in constant motion, staying loyal to the neighbor’s beat. 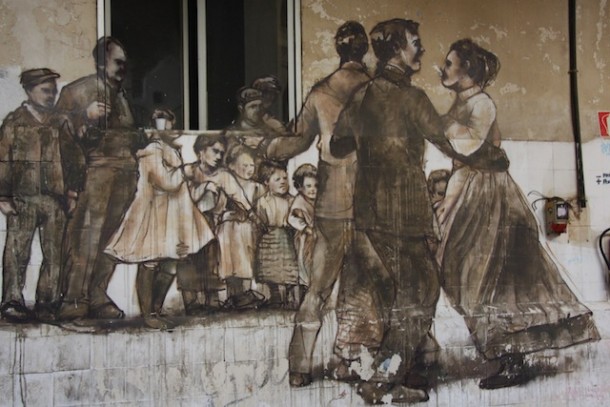 Another piece of wall art inside the central nave at La Tabacalera, Madrid | Tomás DeMatteis

A plastic spider hangs from an arch in the gallery. It is the latest piece in an always-changing exhibit, which features themed structures, paintings, and photographs.

La Tabacalera is a grungy stepchild in Madrid’s family tree of art, which includes the Reina Sofía, Museo del Prado, and the many acclaimed theatres. Still it is celebrated in discrete fame. Context is everything to the art pieces here – it molds the character of each one separately while connecting them all brick by brick. The collections fit effective into the old building’s backdrop like theatre actors, who the audience imagines clearer with a cooperative stage.

Through the pipes, muffled in concrete floors, noises descend onto the loner’s ears. Above, Uruguayan author Eduardo Galeano talks to a large audience about his latest book, Los hijos de los días.

With the commercialization of most other media, the community center remains an open arena where the people have primary say. These voices boom through artistic and educative channels and echo through each growing head that makes up the crowd.

This is not an advertisement about what’s easiest or cheapest. La Tabacalera’s draw stems from the difficult questions confronted in the process of creating or consuming an art piece.

Across the wall hangs a t-shirt mural, a camouflaged artwork in an unordinary cafeteria. The café makes sure each consumer realizes how unordinary it is. A warning sign reads: “Really, this is not a café. We are here to tell you about the CSA Tabacalera and to help you realize your projects while serving you coffee. The bar that is not a bar offers cheap pinchos, coffee, 1€ beer, and special dishes varying daily.

Outside politics and current events spill into La Tabacalera’s heavy boundary. Upcoming demonstrations are advertised and structured, while forums are held to discuss various issues, from worker’s wages to the teachings of Malcolm X.

Another day and the main room now has a stage, where an 8-person, free-form jazz band plays for a group of art students. They sit collective, drawing the scene in front of them in unique patterns and varying shades.

Cars keep moving past Embajadores, scrambling away from the aged building that’s paving its own concrete-free roads. The sunsets and the sunrises come concurrent. Days blend as the people come and go together, hand-in-hand under one arch.