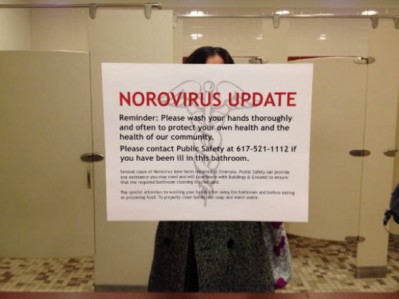 Norovirus, the Most Common Cause of Acute Viral Gastroenteritis

CHINA. At the Fifth International Calicivirus Conference in Beijing this past October, scientists discussed noroviruses, one of the most common causes of acute viral gastroenteritis (inflammation of the intestines) and food-borne disease outbreaks worldwide. The following article is forms part of the material presented at the Conference.

Since the successful introduction of the Rotavirus vaccine, Norovirus infection is now the most common cause of acute viral gastroenteritis in all ages. Norovirus is responsible for 50% of all acute gastroenteritis outbreaks in the United States and Europe. These viruses are highly contagious and can spread quickly from person to person in closed, crowded places like long-term care facilities, daycare centers, schools, hotels, and cruise ships. Due to contaminated food, Norovirus is also the most common cause of foodborne-disease outbreaks in restaurants and catered-meal settings.

Norovirus causes your stomach, intestines or both to become inflamed (acute gastroenteritis). This leads to stomach pain, nausea, diarrhea, and throwing up. Although the severity of disease is usually moderate, lasting 1-3 days, norovirus illness can be serious especially for young children, the elderly, and the immunocompromised patients. It is estimated that 200.000 people die each year from norovirus infections, primarily children in the developing world.

Typical infections cause viral shedding to continue for a period of days to weeks, but some individuals can shed for months or years. Noroviruses are transmitted via the feces and vomit of infected people, either through direct contact or through contaminated objects or via food and water.

Norovirus is present throughout the year, but most prevalent in the winter season in temperate climates; 80% of reported outbreaks occur during November–April.

This virus belongs to the family Caliciviridae and can be grouped into at least 5 genogroups (GI–GV), which are further divided into at least 35 genotypes. Genotype GII.4 has been shown to be the most prevalent in humans worldwide. During the past decade, new GII.4 strains have emerged every 2–3 years and replaced previously predominant GII.4 strains. The emergence of new Norovirus strains is believed to be related, in part, to the antigenic diversity of the novel strain, which leads to the ability to partially escape from preexisting herd immunity acquired against the predominant circulating strain.

Globally, surveillance systems showed Norovirus activity in late 2012. Molecular data shared through the NoroNet network suggest that this outbreak was related to the emergence of a new norovirus genotype II.4 variant, termed Sydney 2012. This new pandemic isolate largely replaced the New Orleans 2009 strain as the most frequently detected circulating Norovirus strain. Its emergence does not appear to have caused a substantial increase in outbreak activity compared with previous seasons, at least in the United States and England. However, as Martin Chan reported in October during the 5th International Conference on Calicivirus, held in Beijing, China, the Sydney 2012 epidemic in Hong Kong was associated with higher hospital admission rate compared with the New Orleans 2009 epidemic. In Hong Kong, the Sydney 2012 strain caused an off-season, community-wide surge in acute gastroenteritis cases during the summer months (July-September) of 2012, three months ahead of the global surge.

The extent and severity of acute gastroenteritis caused by Norovirus highlights the need for strategies to prevent infections. The development of vaccines to prevent illness due to Norovirus is challenging, since human norovirus cannot be cultured and there are no animal models for the disease. In this regard, an attractive approach for development of vaccine candidates to control Norovirus infection is the expression of Norovirus capsid protein to create a virus-like-particle (VLP). These VLPs accurately present important immune epitopes in an authentic conformation as in the virus, but with increased safety due to lack of infectious nucleic acid.

During the Beijing Calicivirus Conference, Charles Richardson (Takeda Vaccines, Montana, USA) presented promising data on recent trials of a live viral challenge following VLP vaccination. He reported that, among the vaccinated volunteers given two doses and then infected with norovirus, this vaccine induced a 52% drop in vomiting or diarrhea of any severity. Having established that the vaccine is safe and has some effect on norovirus symptoms, the Takeda company is currently planning future trials.

While we hope an effective vaccine against Norovirus will soon reach the market, the best we can currently do to prevent infection is to follow these simple tips: