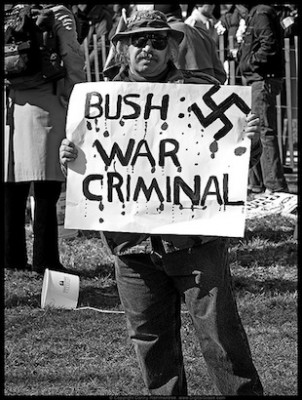 The Iraq Fiasco, Lesson for the United States

[translations idioma=”ES” url=” https://archives.rgnn.org/2013/10/11/el-fiasco-de-irak-una-leccion-para-los-estados-unidos”]
U.S.A. Thanks to how George W. Bush falsely justified the Iraq war, the Western world is more cautious today when deciding whether a situation necessitates war as a solution. The Iraq War serves as a reminder that strong evidence of crimes should be gathered first in order to avoid and stop senseless global wars.

In 2003, nearly three years after an attack on American soil that was claimed by Osama bin Laden, then President Bush accused Saddam Hussein of possessing weapons of mass destruction. Using the fallen towers as a backdrop and capitalizing on the fear and shock of the American public, the administration argued that these weapons would result in a tragedy of even greater damage than 9/11.

Unprepared to handle another such event, the American public wanted to protect themselves and so, President Bush took the country to war. However, the world learned very early on that the proof provided by the Bush administration to the United Nations was a fabrication and there was nothing to be protected from. This realization would change forever the way governments and experts weigh proof of deadly weapons as a basis for war.

The Syrian people are now in a bloody predicament that the world would like to help stop. However, many still remember the Iraqis who have paid a heavy price for intervention – hundreds of thousands were killed and millions were displaced – for a war that was based on bogus evidence.

The Syrian Crisis, which started as simple protests in March 2011, grew to full fledge popular demonstrations by April 2011. Encouraged by the outcome of the revolution in Egypt, the demonstrations expanded across the nation, with the protesters demanding the resignation of President Bashar Al-Assad, whose family has held the presidency since 1971.

It came as no surprise that the Syrian Army was deployed to quell the uprisings. Images of rockets and heavy artilleries launched into civilian areas followed by the bloody aftermath of children with missing limbs have captivated the international community, illustrating the ruthless approach to tame protests. The West, in particular, has been quick to condemn the actions of the Assad regime.

However, unwilling to get marred in another war, the Obama administration has walked a fine line between criticizing the actions of the Assad regime and becoming fully involved. Although deploring the treatment of civilians, Obama was careful to create a red line, the use of chemical weapons, which delineated at what point the US would intervene.

Once that red line had allegedly been crossed, the Obama administration believed it had to make good on its threat. Talks of an air strike on Syria occupied the airwaves. The top officials in the administration were paraded across TV networks to make the case for war with Syria. From the US to the UK and other European countries, the drumbeats of war were sounded.

Still haunted however by the Iraq War, the American public remember the fabrication of proof presented to the United Nations by the Bush Administration and are tired after a 10 year war. Over 70% of those surveyed are against any strike on Syria.

The atrocities seen on TV, allegedly inflicted by the Assad regime, are deplorable; there is absolutely a need for a solution, an accord, a truce or even an end to the fighting. However, America is in no hurry to solve a war problem with another war. For that, we thank George W. Bush for the Iraq fiasco, an indelible reminder, and hopefully, a memorable lesson.