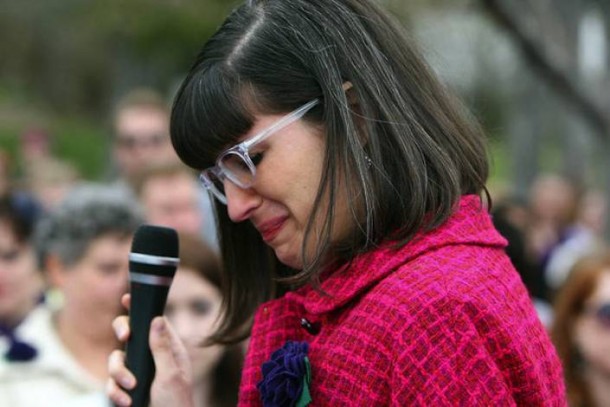 PROVO, UTAH, U.S.A. When I first heard word of the excommunication of Kate Kelly, a Virginia based human rights lawyer and founder of Ordain Women, from The Church of Jesus Christ of Latter-Day Saints for “conduct contrary to the laws and order of the Church” earlier this week, it hit home for me in a number of ways.

First off, I was raised in the very small—but beautiful—valley of Logan, Utah. Although I am not Mormon, several of my best childhood friends are (no surprise there), so I am fairly familiar with its teachings. There were instances when I had blatantly witnessed the Mormon Church’s colossal gender gap, but learned to grow accustomed to it over the years.

Secondly, I am currently an undergrad student at Smith College, an all women’s college in Northampton, Massachusetts, and arguably one of the most concentrated areas of feminists in the country.

Kelly has been a faithful member of the LDS community for all of her life, serving a mission in Spain at 21, marrying in the Sale Lake City Temple after moving to Utah, and up until recently, an avid churchgoer.

However, Ms. Kelly is not be mistaken for the common Mormon woman. She firmly believes that Mormon scripture backs the ordination of women priests (adverse to the original doctrine), and subsequently jump-started the Ordain Women organization. The group “aspires to create a space for Mormons to articulate issues of gender inequality they may be hesitant to raise alone.”

LDS doctrine holds that only men be ordained into the priesthood, as all of Jesus’s apostles were men—not boys; men. Oddly enough, the Mormon Church has no issue with ordaining boys as young as twelve years old. Why is it that they follow Jesus’s example regarding gender, but not age?

Kelly was notified on Monday that she was to be excommunicated from the Church on the basis that the hierarchy deemed her an apostate—the day after an all-male panel of judges held a trial without Kelly’s knowledge.

According to Ordain Women, excommunication is the most serious form of punishment that can be given by a Church Court.

In the letter informing Ms. Kelly of her verdict, written by her former ecclesiastical Virginian leader Bishop Mark Harrison, the Bishop explained that the feminist be banned from acts of Church worship for at least one year. If she demonstrates “true repentance,” including her compliance to cease “teachings and actions that undermine the Church, its leaders, and the doctrine of the priesthood,” she can then be readmitted.

He lastly addressed that, “You are entitled to your views, but you are not entitled to promote them and proselyte others to them while remaining in full fellowship in the Church.”

Kelly is currently experiencing great remorse, and said that the Church’s decision was “exceptionally painful.”

“Today is a tragic day for my family and me as we process the many ways this will impact us, both in this life and in the eternities.”

I don’t consider myself to be a very religious person; I was raised with little religious influence, and therefore try my best to remain objective in respecting all world religions. Be that as it may, I am deeply troubled by several aspects of this situation regarding the LDS Church that I only want to touch base on.

I have issues with the execution of the secret hearing held for Ms. Kelly, along with Bishop Harrison’s last statement concerning the entitlement to “promote” one’s views in the Church—isn’t that the sole purpose of Mormon missionaries? I find this very hypocritical.

Nonetheless, I would like to focus on the growing criticism that Kelly should have just “left the Church” if she didn’t agree with its doctrine of the priesthood.

At Smith College, our entire campus prides itself in whole-heartedly promoting gender equality. We celebrate women, no question about it.

But in the beginning, I thought it a bit naïve of Ms. Kelly to try and challenge the doctrine of such a historically misogynic religion; of course the Mormon Church is sexist (it has also been previously racist until the IRS threatened to revoke the Church’s non-profit status if it continued discrimination against the ordination of black men). I’m not trying to single out the LDS religion; in fact, almost all official institutions of religion are sexist, that’s just how it is.

I admired Kelly in her attempts, but I too thought, why not just leave? However, after hearing her response to Huffpost Live host Caroline Modarressy-Tehrani, my eyes were opened and I was reminded why I attend Smith College.

“If an institution needs to be improved, if there’s ways that it can be more inclusive, I’m just the type of person who likes to invest and dig in and help make that institution a better place, whether that’s the United States of America, where I live, whether that’s my church, that I love. I disagree with the U.S. government on some of their policies but that doesn’t mean that I move to France…And I’m the same way with the church.”

If I’ve learned anything while away at school, it’s that if you don’t agree with something, but have the desire to improve it, do it. Stand up for what you believe in. We all have the right to leave, just as much as we have the right to stay and fight. It is because of people like Ms. Kelly that we have advanced as an American society for the better. I think we can all learn a valuable lesson from her wisdom.