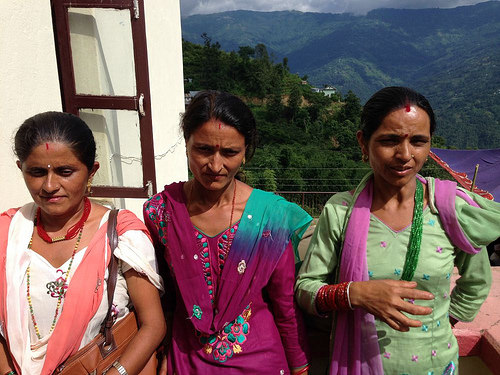 Heaven and Hell in Nepal

In the very old days women had often no value. In the old Testament people were rejoicing if a son was born into the family. In some books or chapters girls are not even mentioned if they were born. While reading it, someone could get the impression that no girls were born at all. Of course that is not true but it seems that way. In the middle east and some muslims countries it is the same way even in 2016. But it is not my business to judge that. But I feel bad and it hurts me to see women treated that way.

In my many journeys around the globe I found out that in Nepal it is the opposite. Families are happy and celebrating if the newborn is a girl and not a boy. But even if it is a boy they have a better position in life and community than girls have in the middle east. Especially in the mountain areas of Nepal were the poorest of the poor are living or should I say existing? They belong to lowest caste in the country. They are called the „Dalits“. Even the caste system is officially not in place anymore, the Dalits are not treated the same way like other people in the country. If they get help from the government they are last ones in the queue. There is even a saying about this group. People of higher caste say: „I rather open my door for a dog but never for a Dalit!“. Terrible words but still the truth in the days where we are live in. How many people died during the earthquake nobody really knows. Hundreds of mountain people dying every year during the monsoon times. I remember my first time in a rain like that. It feels like sitting in a carwash. Villages are just getting swapped away by the massive rain and mud slides. Nobody cares if they die. They are on their own, they are Dalits.

In 2015 during my visit right after the earthquake, the mountain people lost everything. Many lost their lives. Those who survived lost houses fields and in conclusion their income. Help from the government? No way? Help from NGO´s from Europe or the USA? „Too far away..…!“ Thats what most of them said. Yes it was far away and It took me two hours for about seven kilometers. But we got there. What we saw and found were devastating. Houses and huts were flat to the ground. Dead bodies were still around even after a week. Since decades those poor people are forced to sell their kids. Better to say their girls. I am meaning girls of the age of 8, 10 or 12 years. Human traffickers from India are coming to buy those girls for a about 100 USD. They tell stories to the parents that their children will work in a household in India, Thailand or Cambodia. And that what the parents believe. Parents around the world wish the very best for their children. They do everything for them. Mothers and fathers in those remote mountain villages think they could deliver their girls from the curse and cycle of being poor. So they give their kids away. And 100 US Dollars is maybe not a lot for you and me, but for those people it is very much.

I may could stop my writing here, because you may imagine what really happens to the girls. They never see a house of rich Indian or Cambodian  people from the inside. They will not work in their households or cleaning those houses. They end up in brothel or so called cathouses in dirty streets. They are being used and misused from all kind of people. They are treated like dogs for the pleasure of men from all over the world. Men are coming to those areas just because of that. It turns my stomach around just thinking about it. After two or three years they get worthless. And their owners say „it´s time for fresh meat“. That´s the way they talking about those girls. Because the girls are illegal in those countries they have no rights. Some pimps get them out of the country back to Nepal. And this is already a good treatment. Most of the pimps just trough them on the street and than there are on their own. Trouble with police and authorities are their destiny. They are being escorted to the border to Nepal. Then they are back in their home country. But what was home some years ago seems not home anymore. Nobody wants them. Nobody like to have anything to do with them. They were Dalits and on top of that they are prostitutes. With that background no chance of have a good live. No future! No hope! No job! No home! No fellowship! No family! Just Terrible

I feel complied to find a way out of that dark circle where those ladies are in. Time to rescue them on behalf of a better future. My plan is to build a save house for those ladies. A place of rescue and a place of relaxing. A house were they get rest and medical help and help in their traumata. This home will include a place where they have chance to learn writing and reading. There will be an offer of getting teaching and studies in machine sewing, making candles and flower arrangement. These trainings could give them a foundation for a better future and a new life.

And it is my hope and my prayer that we can prevent girls in the mountains to go this modern way of slavery. And thats what it is, slavery. By getting 100 USD the parents fell like being almost in heaven but for the girls it is for sure hell.