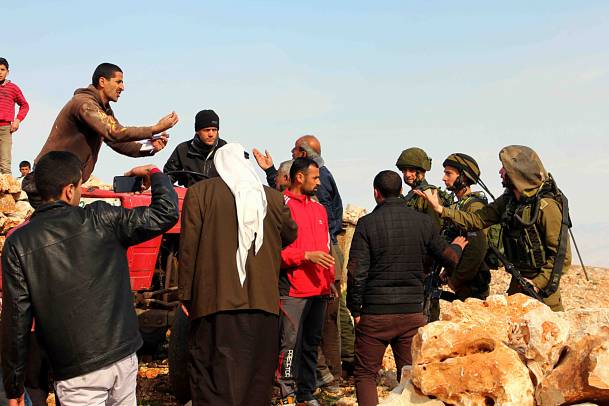 FAR FROM WHAT THE IMAGINATION WOULD EXPECT it was a bitterly cold day as we drove north on route 60, the main thoroughfare that connects north and south in the occupied West Bank. The familiar, finely etched  and sun soaked landscape had now yielded to the smothering overcast grey, now zooming past our window,  on our way to the Palestinian village of Qusra.

Like all Palestinian villages in the West Bank, the Israeli occupation touches the lives and livelihood of all. Qusra has faced a series of land confiscations since the 1980’s that have led to the establishment of the settlements on the village lands in the north and south east. These Settlements are Israeli-only towns and villages in the occupied West Bank and are illegal under international law.

As we pull up to the entrance of the village, en route to a meeting with the municipality, we received a call from the town’s mayor who tells us the Israeli army are in the agricultural land to the south east of the village, serving demolition orders on some of the village’s livelihood structures funded by the French Consulate in Jerusalem. Under the Olso Accords, the interim agreement for the establishment of a Palestinian state signed by PLO leader Yassir Arafat and former Israeli Prime Minister Yitzhak Rabin in the early 1990’s, the village land where these structures lie is within Area B of the West Bank. Under the Accords, the Israeli government should have no authority over what is built – or demolished – in this area.

Arriving to monitor the serving of the demolition orders (a process where documents are normally left beneath a rock at the foot of a given structure), we’re greeted by a large Israeli military presence and a distraught elderly farmer. “I’m a farmer, not a terrorist! Why are you doing this!?”. A tense scene, we learn through our translators that not only are demolition orders being served but that this man’s tractor is being confiscated by the army, without official order or reason,  outside that the army has now declared the area a ‘closed military zone’. The reason for this sudden declaration is unclear.

Aside from demolition orders now placed on the structures, the imminent confiscation of the tractor will leave the farmer with a heavy fine as well alongside his inability to work his land.  A decision that would put the farmer in a binding Catch 22 situation – one that’s not lost on the other villagers pleading his case, exacerbating the tension already felt in the air.  Under article 46 of the Fourth Geneva Convention, confiscation of personal property is prohibited by an occupying power. Article 53 of the Fourth Geneva Convention prohibits an occupying power from destroying – or demolishing – private property. Moments later, this tension would reach its peak when the Israeli soldiers threw, without warning, a series of sound bombs and raised their rifles to the villagers – forcing them to scatter.

Through this noise and confusion the villagers moved back home to the village, frightened and furious at what had taken place.  We heard small voices shouting loudly. The adults were replaced by children who, seeing the escalation and treatment of their fathers and brothers, have now begun to shout at the soldiers from the hillside. As we left, the familiar patter of stones could be heard behind us, landing at the feet of the young and seemingly unfazed Israelis preparing to confiscate the tractor. The soldiers respond by firing tear gas towards the hills. An ordinary February day in the occupied West Bank.