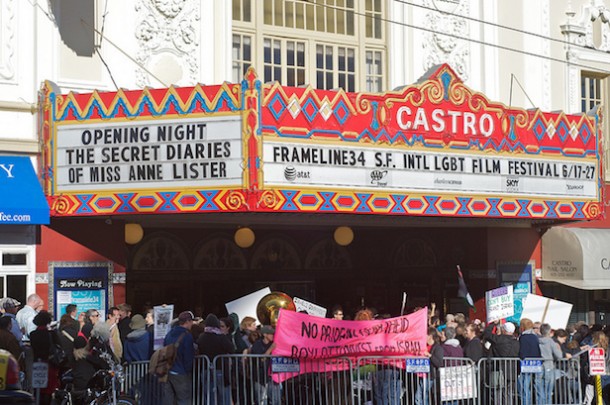 In the discourse concerning the lives of LGBT [Lesbian, Gay, Bisexual, and Transgender] people and Israeli LGBT media, there are two opposing schools of thought: Israel as LGBT haven or Israel as a “pinkwashing” nation. LGBT film festivals have become a central hub to watch during the unfolding of this ideological struggle. 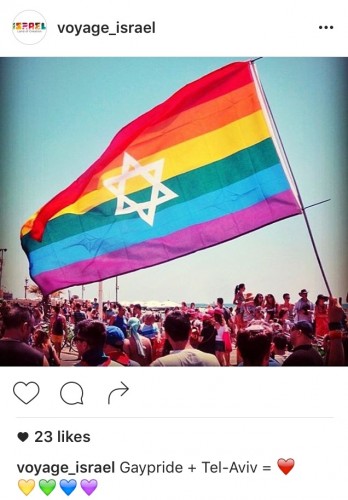 In June, during peak pride season, many people shared photos on Instagram of a pride flag flying against a blue sky with and the hashtag “#gayparadetelaviv2016”.

The volume of Instagram photographs from June like the one above encapsulate the pro-LGBT image of Israel as an LGBT haven— and not without reason. Israel promotes itself as a country with an enlightened approach towards LGBT issues. Pro-Israeli organizations such as A Wider Bridge and Stand With Us work to cultivate a positive image of Israel in the eyes of the international LGBT community, and articles like Francis Lubbe’s Israel is an oasis for the LGBT community in the Middle East and James Dude Mason’s Why LGBT People Around the World Need Israel demonstrate the school of thought that argues it is necessary for the LGBT community to support Israel as an ally and a beacon in the fight for equality in the Middle East.

“In the Middle East is only in Israel it is easy to be gay. I think the main reason why this is so, is that Jews know all too well what hatred ethnic groups may result. Therefore, I think minorities are more protected in Israel than in other countries in the Middle East. My grandparents are Holocaust survivors. They know well what persecution is all about,” says Omar Sharif Jr, actor and LGBT activist.

“Pinkwashing Israel” began cropping up as a search term in early 2011, according to Google Trends, and some members of the LGBT community use it to describe the image of LGBT+ friendly Israel as a calculated tactic. In this school of thought, pro-Israeli organizations promote LGBT tourism, artists, and films in order to portray Israel itself as a cultured and forward-thinking nation—all this in juxtaposition to its neighbors in order to justify, in part, its own agenda in the region. Dean Spade, an Associate Professor at Seattle University School of Law, wrote in January that “this message relies on Islamophobia and anti-Arab racism […] activists around the world who oppose occupation and apartheid have called this propaganda strategy ‘pinkwashing’ because it is a direct effort to conceal the extreme violence and harm that Israel inflicts on Palestinians, including queer and trans Palestinians, by promoting Israel as ‘gay friendly.’”

“The goal of Pinkwashing is to justify Israel’s policies of Occupation and Separation by promoting the image of a lone oasis of progress surrounded by violent, homophobic Arabs- thereby denying the existence of a Queer Palestinian movements, or of secular, feminist, intellectual and queer Palestinians,” says Sarah Schulman, writer and LGBT activist.

The San Francisco-based LGBT festival Frameline has been criticized for years for accepting financial support from the Israeli consulate, and especially in 2012 when a leaked document revealed connections between Frameline, the Israeli Consulate, and the Jewish Community Federation of San Francisco. It only released a response “affirming Frameline’s inclusive arts-focused mission, rather than becoming a proxy in a divisive political issue.” Outside the Frame, organized by Queers Undermining Israeli Terrorism, and the Queer Women of Color Film Festival are just two groups that have boycotted this particular festival in response.

The Vancouver Queer Film Festival included a controversial advertisement from Yad b’Yad LGBTQ in their events program 2014, and released an open letter detailing future plans to avoid nationalist imagery and focus on curating films and keeping an open dialogue rather than allying with any political groups. Image+Nation, Montreal’s LGBT film fest, has been recently criticized for taking funds from Israel’s consulate in 2015 and has yet to issue a response. Meanwhile, Tel Aviv International Film Fest remains the only ongoing LGBT film festival in the Middle East today.

Individual Israeli films receive heated backlash just as often as film festivals. Out in The Dark (2012) and The Invisible Men (2012) are two such films often discussed and critiqued for their treatment of gay Palestinian men Israel whose personal identities are caught up in the in Israeli-Palestinian conflict.

This is a complex issue, but at least it is becoming increasingly visible. Activists and film-lovers alike will continue to monitor how the LGBT community and LGBT film festivals respond to ongoing protests, calls for action, and constant negotiation by marginalized factions. The search for an answer to this divisive clash of ideologies yields more questions: Charlie Boudreau, executive director of Image+Nation, addressed the need for delay in the film festival’s response time by saying, “I think that art has always been a voice for change. To cut that voice down makes me very uncomfortable […] We can’t take Israeli funding, but does that mean we can’t take Israeli-funded films? Where does this censorship stop? It seems like a slippery slope.”