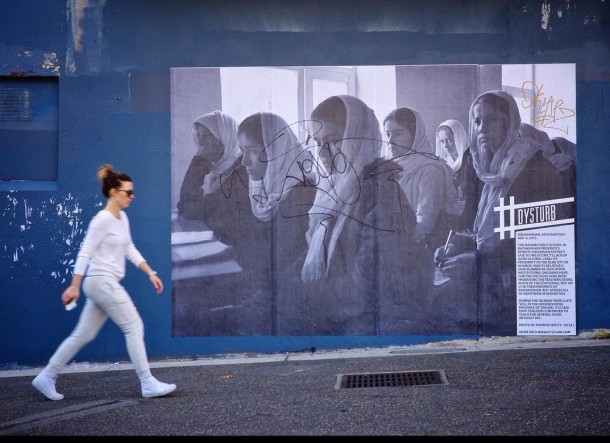 Dysturb pasteup in Newtown from photo by Andrew Quilty | Dysturb

With the constant bombardment of bad news, our capacity to truly sympathize with the realities of those far from our own has been nearly obliterated. In the wake of another violent attack, we feel increasingly incapable of solving the issues at hand, and succumb to the easiest solution, which is to forget. As a result, a group of freelance photographers known as #Dysturb is intervening the cityscapes of major cities around the world by pasting life-size images of current issues of global concern in the main streets of Paris, New York, Sydney and Sarajevo amongst others. The latter is done as a way of awakening photojournalism’s informative and captivating power and making it accessible to everyone through street art. By placing the images on main streets, the group of photographers hopes to initiate discussions and awaken the interest of the entire community on world events. The use of the hashtag, which is a popular sign in social media, has allowed the community of photographers to diffuse their projects using Instagram and Facebook, both sites where they have more than three and seven thousand followers respectively.

#WARMFEST2016 has well and truly kicked off in #sarajevo, and we are pleased to say that for the third year running, we will be pasting large format images throughout the city! Pictured is Frédéric Lafargue’s (@wildflowerfred) image, which was taken for Paris Match (@parismatch_magazine), located at 24 Ulica hamdije kresevljakovica, skenderija. The caption of this image in English: Doogrdkan, Iraq. March 20, 2016. Iraqi Kurdistan, Doogrdkan, is the position held by the peshmerga forces defending the front line against Daech in Mosul. Here soldiers of Colonel Adham “Banani” receive and provide security for Sunni civilians fleeing the area controlled by the Islamists. They are seeking refuge in Iraqi Kurdistan. Photo: @rafaelyaghobzadeh _________________________________ #Iraq #peshmerga #mosul #sunni #iraqikurdistan #islam #islamists #civiians #war #frontline #conflict #parismatch #Iraqikurdistan #soldiers #kurdistan #bosnia #herzegovina #photojournalism #dysturb #reportage #photography #photographyfestival

Bad news never ceases to come our way. Whether its another bombing, shooting, the impending threat of climate change or a deadly disease spreading across the globe, violence and death has become such a commonality in our daily lives, we have become numb to it. Perhaps in a failed attempt at being empathetic we might post an image about it on our social media accounts, expressing sympathy for those affected, even when they are at the other side of the world and there is no picture or words that can actually ease their pain. What usually happens in the aftermath is we forget; it can even occur that we don’t even find out about it at all. Forgetfulness and oblivion are weapons of self-destruction; as the philosopher George Santayana once said, “those who cannot remember the past are condemned to repeat it.” Art’s role in society is often taken for granted when it comes to political, economic and social justice issues, but taking a look at what artists in the past have tried to address proves that an image is truly worth more than a thousand words. Photography specifically, is such a powerful medium because of its honest, often candid nature. #Dysturb’s life-size images act as a pause in the hectic city-life; they make you stop, look, think and mark you. Their size serves as a direct confrontation to the viewer, an image one simply cannot pass by, an issue one cannot ignore. In this way, photojournalism proves in its most raw form, that the world is constantly turning upside down, and that truly someone’s suffering is not as far away as one thinks.

Pierre Terdjman and Benjamin Girette, founders of #Dysturb, are both photojournalists currently working independently and contributing to major publications such as The New York Times. The community welcomes professional photographers to submit images of current world events. Photojournalists from all over have contributed their work to this project, constantly reflecting upon issues of climate change, the refugee crisis and war. To celebrate World Refugee Day, photographer Hugo Aymar submitted an image of refugees trying to lift their families to a train in Tovarnik, Croatia on September 15, 2015, after a fence between the Serbian-Hungarian border was erected.

#WorldRefugeeDay: Today we will be posting photographs highlighting the current #refugeecrisis! Earlier this year, we installed Hugo Aymar’s (@hugo_aymar) image (pictured) in #Toronto, #Canada for #CONTACT16. The caption of this image: Tovarnik, Croatia, September 18, 2015. A group of refugees are desperately trying to raise their families into a train while the croatian police is overwhelmed. On 15 September, the fence erected at the Serbian-Hungarian border at the request of Hungarian Prime Minister Viktor Orban has led to derive the flow of refugees through Croatia. The Tovarnik train station quickly became an informal camp for refugees coming from Serbia. These are then stuck here, forced to leave with buses and trains chartered by the Croatian state. © Hugo Aymar / Haytham Pictures (@haythampictures) ____________________________________________ #refugees #migrants #migrantcrisis #Tovarnik #Croatia #hungary #serbia #families #refugeecamp #camp #dysturb #photojournalism #reportage #photography #displacedpersons A photo posted by Dysturb (@dysturb) on Jun 20, 2016 at 10:13am PDT

The threat of climate change is another example of the kind of work executed by #Dysturb. On January of 2015, photographer Georgina Goodwin captured an image of a Kenyan farmer testing for soil moisture. The increase in the planet’s temperature has lead to a decrease in precipitation in this region, affecting greatly the availability of food for the people of Kenya.

#Dysturb destroys the concept of frontiers, and the images turn us all into citizens of the world.  Affected in some way or another by a stranger’s grief, their shocking nature reminds us that awareness is the first step towards change and growth, you must start by making people aware of the problem and someone will come up with a solution.