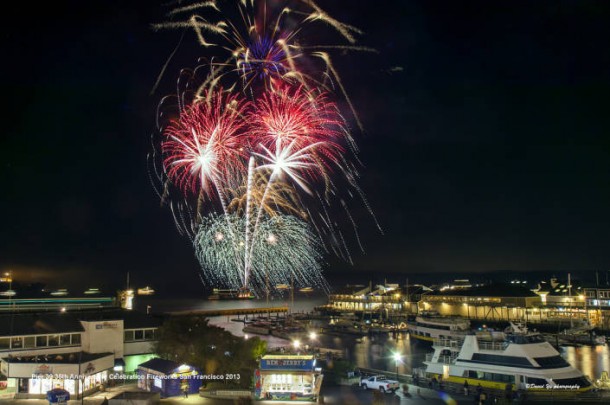 Drought Causes Firework Precaution for the Fourth of July

CALIFORNIA, U.S.A. The Fourth of July is a day where many Americans gather together in order to celebrate the United States’ day of independence. This special occasion is commemorated with the lighting of fireworks throughout the nation. However, within the state of California this custom is being carefully monitored and restricted given the severe drought that the state is currently facing.

Formally known as Independence Day, this day essentially memorializes the adoption of the Declaration of Independence (done so on July 4, 1776) that finalized the efforts to establish the United States of America as an autonomous and independent country from the then Kingdom of Great Britain. This action sparked the Revolutionary War. Today, this pivotal event is honored as a federal holiday and is celebrated with great patriotism. Typically, cities and states host a variety of events such as patriotic parades, speeches from their political leaders, and fairs. Other festivities include families reuniting over a barbecue, block parties, sporting red, white, and blue and the American flag, and above all is watching a fireworks show. For most communities, the firework shows are the highlight of the evening.

Specifically, fireworks are commemorative of the battle explosions from the Revolutionary War and thus serve as an allusion of the efforts of our predecessors to obtain the independence that this nation now holds. Unfortunately, in California fireworks this year are seen as more of a threat than a celebratory tradition. Given the chronic drought drying up the state, water reserves are currently at an all time low. Every year this holiday has caused a number of wildfires, but realistically with the low water reserves and the dry climate the state is not capable of effectively putting out wildfires when they start. More so than ever, the Fourth of July is one of the most dangerous days for California, especially because of how its residents choose to celebrate. Typically, families here purchase and light up their own sets of fireworks before attending a professional show. Particularly in Southern California, many neighborhoods host block parties where families who have opted to purchase their own fireworks can set them all off together. This way of celebrating is so embedded in American culture that the California Department of Forestry and Fire Protection (CAL FIRE) has issued a Safety Guide with the hopes that everyone within the state will be able to enjoy the Fourth of July fire free.

In order to convey firework safety to the greater public, CAL FIRE has published a Safety Fireworks Guide through a variety of sources, particularly through flyers, YouTube videos, and news releases. Not only does this guide promote purchasing State Fire Marshal approved fireworks, but it also lists what families ought to do. Specifically, the guide instructs families to never use the fireworks near dry grass or flammable materials as well as having a bucket or water or sand nearby as a precautionary measure. Moreover, it strongly encourages families to only attend professional fireworks shows because by doing so the risk of causing a wildfire is significantly reduced. Greater precautionary measures taken by the state include restricting the use of personal fireworks. Given the circumstances some cities within Southern California such as Fontana and Los Angeles even banned the sale and use of fireworks in its entirety even though fireworks are such an emblem of this holiday.

Although it is a day of celebration, California residents need to be cognizant of the dangers that can occur on Independence Day. If wildfires do begin because of the misuse of fireworks, putting them out would severely jeopardize the state of California by using up the scare water supply. It is therefore necessary and commendable that CAL FIRE has launched such a persistent campaign to celebrate the holiday while mindful of the present condition of the state.