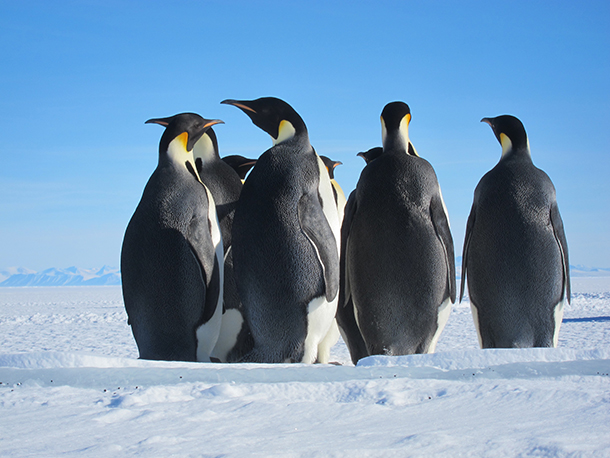 Nomadic Penguins — Happy Feet Are On The Move

GLOBAL. Emperor Penguins have recently garnered public attention with the blockbusters March of the Penguins and Happy Feet. These films debuted in 2005 and 2006 respectively, prompting increased media coverage of Emperor Penguins and the increasing threat of climate change. While the public has only recently come to worry about the fate of our feathered friends, scientists noticed an alarming pattern starting in the 1970’s. A closely studied population of penguins at Point Géologie (the same colony which starred in March of the Penguins) decreased by half between 1976 and 1982. This startling decline coincided with unusually warm temperatures in the Antarctic and a regime shift that changed the southern oscillation index. Interpreting the available data led many to conclude that climate change was seriously damaging the Emperor Penguin population.

Most scientists concluded that the declining population of penguins at Point Géologie resulted from increased mortality rates. However, this conclusion relies upon a philopatric model of Emperor Penguin ecology: meaning that the birds always return to the same colony following their seasonal migration. Conversely, a metapopulation model allows scientists to account for emigration, perhaps explaining how a large group of penguins disappeared so quickly.

Michelle LaRue highlights the metapopulation model in a recently published article. LaRue works as a cartographer at the United States research center at McMurdo Station and spends a lot of time studying maps. LaRue and her boss noticed that their new satellite maps (with a resolution of 60 meters/pixel) could distinguish individual animals on the sea ice. She then used these images to look for a number of Antarctic species, including Emperor Penguins. This visual search led her to a number of new Emperor Penguin colonies.

In light of this finding LaRue suggests that declining population of various colonies was the result of emigration to other colonies. While many scientists were concerned about the mortality rates in the Emperor Penguin population, the birds may have simply moved. LaRue points out that emigration might be more common when climate change affects the penguin’s habitat, thereby explaining the concurrence of warm temperatures and decreased population.

This type of emigration is certainly feasible. LaRue notes that Weddell Seals and Adélie Penguins have been shown to migrate, and Emperor Penguins can travel up to 1000 km a year to search for food. These penguins clearly have the ability to move, and are in good company among their polar cohort.

ROOSTERGNN sat down with LaRue for a quick round of questions in order to learn about her research:

I see that you’ve been working in ecology (specifically spatial trends) since your undergraduate degree. How did you get interested in the Antarctic?

Michelle LaRue: I did my PhD down there. I was working with the Antarctic Geospatial Information Center after I completed my Master’s Degree in 2007.

You have a number of publications on Adélie Penguins, why the change to Emperor Penguins?

It was a chance encounter. We just found a random colony and I thought maybe they just moved, especially since they were only 190 km from where a different colony had gone extinct.

Why do you use satellite imagery to search for the penguins?

I was working as a cartographer at McMurdo station so I had the images. It turns out you can actually see the animals, so I started looking for them.

Do you get to go down to the Antarctic for your research, or is it done remotely?

I’ve been to the Antarctic six times but I didn’t go last year. McMurdo is incredibly cold and windy in the spring but it’s gorgeous, and there is sunlight 24 hours a day. It’s also a good collaborative atmosphere and feels very inclusive.

How do you get down there?

We fly in C17 or C130 from Christchurch, New Zealand. It’s a huge hangar and it’s really loud and cold, but it can be nice, especially on the way back when you just want to sleep.

I’m wondering what your findings mean for the health of Emperor Penguin populations; are they not actually affected by global warming like we thought?

Is it really feasible for the penguins to travel so far to create a new colony?

Definitely. They can travel 190 km with no problem. The birds breed in May and then the females lay their eggs in June. After that the parents take turns foraging and go hundreds of miles. In December the adults disperse to molt in the pack ice and then the birds return to their sea ice colonies in March.

Do the penguins have a better chance for survival since they can move?

Not necessarily. The penguins need ice as a platform to sit on but also as a habitat for their prey. In the short term its good but once it gets to the point where the sea ice can’t support their prey, they will be in danger.

What do you hope to see in response to your publication, in the scientific community or in the general public?

I would love to see someone put together a metapopulation model for Emperor Penguins…in general, I just want people to be informed; science is always changing and it’s important that we know what’s going on.

LaRue is careful to make claims that her data can support. Satellite images show changing populations of Emperor Penguins. Perhaps this is a result of migration, or maybe we still haven’t discovered the right answer. A metapopulation model could help answer this question, but one has yet to be constructed. The role climate change plays in these populations poses more questions; how will the penguins be impacted, and how can we help? LaRue and many other Antarctic researchers will certainly be on the case for years to come, counting penguins and watching their every move.