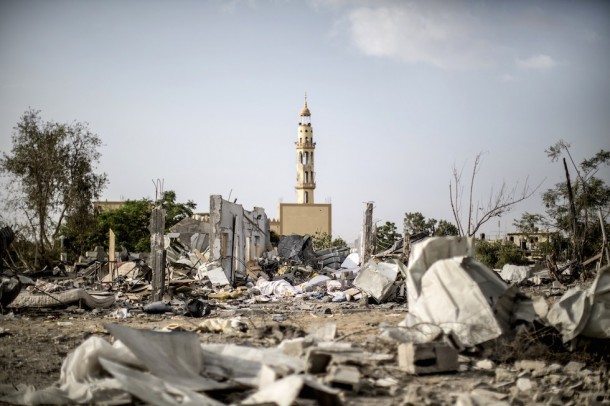 GAZA. On what many are hoping will be the beginning of a lasting ceasefire, talks are continuing in the Egyptian capital while the people of Gaza asses the scale of destruction inflicted by operation Protective Edge. The lack of clean water and electricity has become a paramount concern, as appalling sanitary conditions have given rise to widespread disease.  This, affecting thousands of Gazans, underscores the desperate and ever deteriorating conditions currently prevalent throughout the strip.  Now, in what has been the bloodiest operation in Gaza yet, Israel’s conduct and legal obligations are becoming increasingly scrutinized as the task of financing and rebuilding what Israel has destroyed is asked of the International community once again.

Water Compiled form the Situation Reports of the UN-led Water, Sanitation and Hygiene Cluster, the latest EWASH figures reveals that as of August 5th all of Gaza’s 1.8 million residents have very limited or no access to clean water.  Sewerage waste is flowing in the streets causing huge health concerns, bakeries’ can produce only a small amount of food, hospitals are on emergency fuel generators and approximately 25000 cubic meters of untreated waste has run into the Mediterranean sea so far. Although even before this latest conflict, Gaza’s infrastructure had been in a fragile state, now the lack of power to treat the saline water so as fit for consumption has been attributed to the IDF’s shelling of Gaza’s largest power plant on the 29th of July. Although the IDF denies the attack was intentional, many believe the IDF, in a bid to halt Hamas rocket-fire, deliberately targeted it alongside other critical civilian infrastructure to ramp up the misery and suffering of those most vulnerable on the ground. If so, this would be a flagrant breach of International Law as Israel would be carrying out collective punishment on an entire population by denying them the energy needed for food, sanitation and water.Under International Law, buildings such as airports or power stations are deemed ‘dual use‘ facilities. This means that while these buildings are important militarily, they also are of significant value to the civilian population. Harm to the civilian populations, either immediately or as a result of destroying this infrastructure is illegal under the law of war and is in line with similar tactics used against Hezbollah in Lebanon by the IDF in 2006.

It’s been cited that Israel have implemented what’s known as the ‘Dahiya doctrine’ in Gaza. By using asymmetric military might, the IDF deliberately obliterates civilian infrastructure in an effort to break Gazan support for Hamas.  As cited above, the tactic gets its name from Israel’s 2006 war on Hezbollah in Lebanon. Although just as abhorrent there, the current operation in Gaza differs as Israel has a legal ‘positive obligation‘ as a de-facto occupying force. In legal advice sought by the Knesset’s Members of the Foreign Affairs and Defense Committee in July, it was outlined that;

“Israel’s control over this infrastructure entails positive obligations. Thus, if infrastructure that supplies water and electricity to Gaza and is under Israel’s effective control gets damaged in the hostilities, Israel has an obligation to repair it to the extent possible, in order to renew the supply of these basic needs”.

Rebuilding Gaza: Who pays?
With whispers from both sides, hinting at a more sustainable truce, the question of the aid needed to rebuild Gaza, and more specifically where it will come from, is being brought into question. In September, Norway will be hosting a donor conference to try secure the                     $6 billion  the Palestinian Authority says is needed to rebuild and replace what was destroyed.  However, yesterday the Israeli Minister of Finance, Yair Lapid called for terms to be added to any aid package. He stated that aid should only be administered if Hamas surrendered power and let Mahmoud Abbas and the deflated Palestinian Authority take control of the Gaza Strip. He also stated that Israel ‘did not plan to participate’ in the donations to rebuild Gaza. This may only cause further tension between Brussels & Jerusalem as already it’s estimated that Israel has destroyed some $66 million worth of European development and humanitarian projects in the territories between 2001 & 2011.