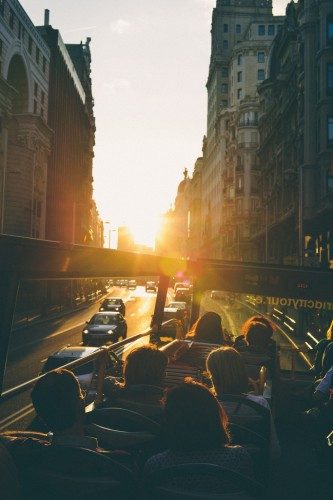 Your culture and arts guide in Madrid

Spain’s capital and largest city, Madrid, home to one of Europe’s most dynamic cosmopolitan cities. Known widely for its eminent architecture which offers a unique character to each neighbourhood, is a clear embrace of the historic quarters of Madrid

Lucky for you, Madrid’s most popular touristic attractions lie in the city centre, connected very well with all forms of transport, there’s nothing on your list of places to visit that you won’t get to see.

Now what places should you visit?

The heart of the city is Puerta del Sol, the hub of festivals, street performers and important congregations, you’re bound to be entertained. This is definitely a place to roam around and discover. If you liked Puerta de Sol then don’t miss a Sunday morning at El Rastro located at Calle de la Ribera de Curtidores, there you will find a maze of streets with art stands from locals.

Circulo de bellas artes rooftop is the place to be with your travel companion – the one that only needs an adapter and be charged, I’m talking about your camera of course.
Here you will be able to have a 360 panoramic view of Madrid, it’s open Monday- Friday 9am-9pm and weekends 11am-11pm for just €5 including all the perks.

Plaza Mayor is the place to go for all those ‘last-minute’ souvenir shopping sprees we all get ourselves locked into. With the ambient renovated Mercado de San Miguel, you’ll be fully charged to carry on after you’ve had one too many delicacies. Host to live music and open till 2am, this is one place to tick off your list.

Another plaza to not miss is Plaza de Cibeles, you will undoubtingly be mesmerized by the surroundings of the neo-classical style of architecture, an example of this is Palacio de Cibeles.
At the centre of the plaza is a breath taking statue Fuente de la Cibeles considered to be a symbol of the city that depicts Roman goddess Cybele on a chariot drawn by lions.
Interesting fact: the fountain once aided as a source of domestic water for nearby houses.

For all those museum lovers hello to you, Museo del Prado is an absolute must.
An 18th Century structure is home to more than 7,000 works of art, embodying the 12th century’s to the early 19th century’s culture and history. Without a doubt, a world class fine art collection.
With so much to see it’s impossible to see everything in one day, the recommendation is to marvel at dare I say, the undisputable best collection of Spanish paintings in the world of Da Ribera and Velazquez, El Greco y Goya – admission sold or what?

It doesn’t end there though, Museo Reina Sofia is one stop to make.
Originally built as a hospital in 1992, encompassing the works of Spanish artists, extensive artwork collections by Salvador Dali and Pablo Picasso’s masterpiece El Guernica, which conveys the horrors of the Spanish civil war. Art and culture lovers, do you seriously want to skip this? I didn’t think so.

With all this walking it’s time I introduced to you to El Retiro, that began as monastery in the 1500s, later to be expanded into a royal park when in 1561, then becoming part of the public domain since 1868.
A 350 acre spread of gardens, fountains, which features a large artificial pond for that impulsive kayak and canoe adventure to tick of the bucket list of things to do in Madrid. Keep an eye out for the Paseo de Argentina, where statues from the Royal Palace represent Spanish Kings through the ages.

Parque del Oeste is a park to not miss either here an unusual sighting is found and a story to share get ready for the prologue.
The Temple of Debod, once stood on the banks of the Nile as the temple of Egyptian goddess Isis, until the construction of Egypt’s Great Dam of Aswan took place. In order to preserve the historical monuments from the flooding, Spain ascended to its rescue and as an expression of gratitude, the Egyptian government gave the Temple of Debod to Spain in 1968.
Bet you didn’t know that, right?

To the ones who never sleep, welcome aboard, Gran Via will become your sanctuary. The grand boulevard is known as the Broadway of Madrid, running through the Plaza de España to Calle Alcalá you will find hundreds of restaurants and shops to fall in love with.
A little bit of trivia here: when you stumble upon the Telefonica Building know it was once the tallest building in Europe when it was completed in 1929.

The last place to not miss known as one of Madrid’s most popular attractions is the Palacio Real, Madrid’s Royal Palace. Built in 1764 the palace served as the royal residence, imposing more than 2,500 decorated rooms. While the palace is still used for official ceremonies, 50 of the elegant rooms are open for the public so take advantage of this.

Final top tip, as much as you’ll love all of these places so will the pickpocketers, make sure you keep your belongings tight and out of reach.