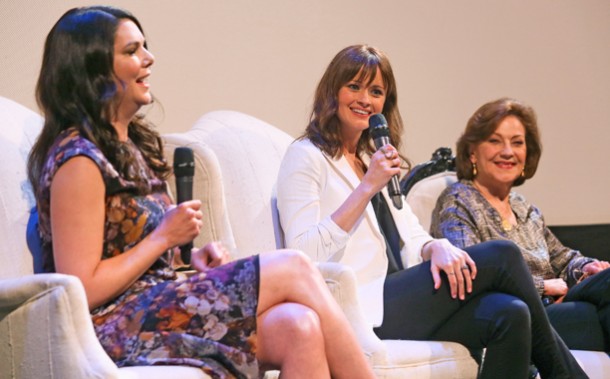 On June 6th, 2015, the beloved cast Gilmore Girls reunited for their 15th anniversary at the ATX Television Festival in Austin, TX.

The panel began with the Gilmore girls themselves: Lauren Graham, Alexis Bledel, and Kelly Bishop (Lorelai, Rory, and Emily, respectively). Accompanying them was the creator of the show, Amy Sherman-Palladino.

Jessica Shaw from Entertainment Weekly interviewed the stars and smoothly shifted the conversation through numerous topics, ranging from the path each actress took that led to her role, to the witty language of the script, to the tragic passing of Edward Herrmann (who played the patriarch of the Gilmores, Richard). The chemistry between the leading ladies was immediately evident, as they silently or quietly conversed amongst each other while off the microphone for quick comments, questions, or laughs.

Sherman-Palladino revealed that the entire concept of Gilmore Girls was offered to the producers on a whim, and soon after, the premise was built hastily and influenced by Sherman-Palladino’s. As she put it, “the stars align” perfectly and the foundation for a masterpiece was quickly thought into existence.

Each actress felt strongly about her respective character when first reading the script. “I had the wonderful experience that actors have when they read something and instantly know who that person is and what voice they have and what they’re thinking…I knew who she was,” said Bledel of her role as Rory, the sweetheart of the quaint, charming town of Stars Hallow.

Sherman-Palladino was praised for her sharp, witty script that included countless pop culture references, hilarious repartees, and endearing small-town foolery. After a tribute to Edward Herrmann played for the audience, the producer and cowriter of the show as well as Amy’s husband, Daniel Palladino joined the Gilmore girls on stage along with most of the cast. The actors and actresses were asked where they thought their character would be in life today.

Scott Patterson who played Luke responded with a well thought out idea of Luke residing “forty miles outside of town” running a shop with “Lorelai coming out for a fishing lesson- fly-fishing… and camping!” Liza Weil, aka fierce, powerful, beloved Paris Geller quickly declared that Paris and Doyle would be married and “supporting each other and just taking over the f*cking world.”

The cast then took questions from the audience about plot progressions that occurred in the show, the fast-paced dialogue, and their favorite on-screen personalities.

Before the stars settled onstage for the three-hour long panel, a handful of the stars (Graham, Bledel, Bishop, Patterson, and Jared Padalecki who played Dean) had an hour-long interview with the Today show interview with the Today show that took on an interesting topic—if Gilmore Girls were to air today, how would it differ from when it first aired fifteen years ago? This topic was touched upon in both the Today interview and the Entertainment Weekly panel, but the general consensus was that TV today is vastly different from TV just one decade ago.

“TV sometimes rushes into things, without thinking about, ‘what are you losing’?” Sherman Palladino said to EW.

Lauren Graham described TV today as consistently “noisy.” Sherman-Palladino in a past interview with the magazine OutSmart, said, “I think music on television is just uniformly dreadful. It is mundane, it says nothing… It’s not an extension of the drama, it’s distraction.”

And it’s true. While Gilmore Girls developed slowly, matching the pace of small-town Stars Hallow, the audience was undeniably hooked to the personal, welcoming environment the series created. Today, TV networks are plagued with obnoxious reality TV shows, dramatic series that start off chaotic and only rise with endless plot twists, and so many bright colors. “We’re desperate for good television,” Kelly Bishop told the Today show.

Luckily, Gilmore Girls may swoop in and redeem television trends. During the EW panel, talk of a new, more satisfactory ending to the series bounced among the stage. Sherman-Palladino and her husband were not involved with the final season of GG, and the cast themselves were unaware that the seventh season would be the last. While Sherman-Palladino has no concrete plans in the works, most of the cast seemed to be on board with a new, final ending.