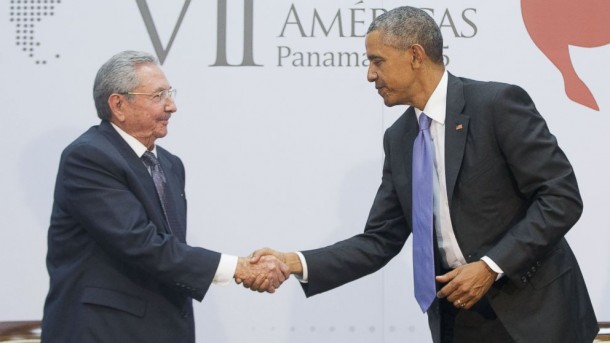 Cuba, the Beginning of a New Era

While the relationships between the United States and Russia have been worsening for the last year because of the Ukraine war, new scenarios are rising in other directions. In fact, Cuba has been removed from the black list of the US on terrorism by John Kerry. After 55 years of deep darkness between the two countries, new perspectives seem to prevail and many are hoping for a future of cooperation and mutual aid between Cuba and the United States.

As we all know, in 1959 Fidel Castro went to power in Cuba and this was just the turning point for the beginning of a cold war with the America superpower. Washington, indeed, could not put up with the existence of a communist regime some kilometres far from its coasts, hence the decision to set the embargo against its enemy.

Contacts seem to have resumed by chance, through an exchange of prisoners during which the two diplomacies have started talking secretly about a reunification. As the possibility of a dialog has been given light, many say that the role of the Vatican has always represented a pillar for urging the reconciliation of the two sides.

Officially, the first steps were moved by the United States with the decision to ease travels and trade with its former enemy on the 15th of January of this year, with a set of regulations which allowed Americans to travel to Cuba without any complication concerning permissions. An important date was the 21st of January, when new meetings started between Cuba and the US. From this meetings some important measures have been constantly taken, and they have helped for the normalization of the relationships of the two parts. First the allowance to reopen the embassies, second the decrease in the regulations of the United States set on trade against Cuba and then the beginning of new negotiations between the two countries. After the end of March, contacts seem to have vanished, however further policies are likely to be put in practice in the short run. It is clear that a long period of time will have to elapse in order to see a stable and free cooperation, for there are still some problems hindering the way towards such situation (such as the opposition of a great part of the Republicans who are at the Parliament), but conditions suggest positive developments.

Given such considerations, it is possible to claim that the last bricks of the cold-war war are being extirpated and Russia cannot rely any longer to a former precious ally. But what are the main changes that the Island can undergo? The United States are widely recognised as the greatest superpower of our world and the lack of resources, financial aids and services from such a country have not helped Cuban economy, which instead has fallen behind if we consider global trends on growth. The opening up of the country to the US might definitely represent the beginning of a deeper cooperation also with the other western economies and so the modernization of the country.

Many are the sectors which need to be modernized in Cuba, but the one that needs reforms most is the industrial one. On the other hand, agriculture has shown good trends especially during the last years and it is definitely what the economy is based upon. This is just the field the country should bet on: the high productivity of Cuban agriculture (the quality and extension Tobacco industry, in particular, is known worldwide) represents a great potentiality and it is important now to be able to attract foreign investments, especially from the United States. Many investors could be attracted to look for great returns, not only in the agricultural sector, but also in the tourist and offshore-oil ones.

The Communist system has impeded over the last five decades to enact suitable reforms for the modernization of the country, and every attempt has been promptly suppressed. The rundown conditions of the country have permeated not only in its economy, but also in the general conditions of life of its inhabitants. The absence of mobile phones, modern means of transport and private televisions are only some of the examples of the retrograde conditions of the country. Now that the economy has the opportunity to gain strict contact with the US, the factors of growth might be exploited through a mutual exchange in terms of trade, both by exporting its resources and by importing what the US themselves have to offer: resources, services and culture.

Cuba is a country by the huge potential, and the modernization of the country is a target that is bound to be achieved if it opens to other economies. However, immediate changes will be reflected in those elements that characterize the daily life of the country: old-fashioned cars, rundown buildings, only-public services will give room to the modern elements of the capitalist system. What’s more, the renovation of Cuba in all its aspects implies huge revenues for entrepreneurs from both inside and outside the country; thus which better conditions can prompt such changes?

During their history, The United States have always tried to adopt imperialist policies or, at least, to produce a great influence on other countries, and this is likely to be the case. It would not be completely wrong to claim that the capitalist system would take over Cuba, substituting its main traditions. The country is already influenced by rich tourists who can afford expensive journeys to Cuba and the prospect of capitalism gaining the upper hand is mainly a matter of culture rather than conditions. Having the frontiers opened by the United States would mean especially receiving the influence of its culture and the likelihood of a radical change in line with the most advanced capitalist economies is not an impossible prospect.