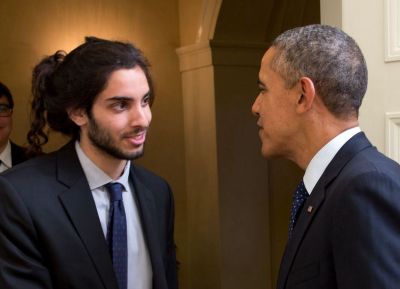 As viewers, we don’t always question the sequence of images that play before us; we don’t always think about the special shooting techniques, the equipment needed, or the editing process.We don’t care enough to notice because we’re just there to enjoy… but Jon MAKES you notice.

At the age of 24, Kasbe has become an emerging talent in filmmaking for his generation. It’s a story that started at a young age when Kasbe’s grandfather was doing missionary work in India and was brutally beaten. When word got to Kasbe, he took action immediately.

“I felt fire in my soul for the first time, and it was bizarre, but incredibly memorable. I saved money and flew to India and did a documentary about him and what happened. I realized the documentary was a tool. I realized I cared about something bigger than myself, “says Kasbe. He was 12.

Kasbe’s interest in human storytelling shows in his films. He immerses himself in his subject’s story wholeheartedly. His camera follows people through ordinary daily activities that we often overlook, but the images help us relate to the subject, creating an emotional appeal that makes his short documentaries personal.
Kasbe’s former professor at the University of North Carolina at Chapel Hill, John Clark, still remembers Kasbe fondly.

From the Galapagos Islands, to Japan, to Israel, Kasbe is willing to jump on a plane at any moment. His latest international endeavor took place in Fiji where he followed two men, Ben and Masi, who traveled to the island to start their music careers in a beat-making lab. The film won countless awards, was recently nominated for an Emmy, and landed Kasbe a meeting with Obama in
the Oval office where he received an award for being the Student Videographer of the Year.

Not that he cares. Kasbe doesn’t pay much regard to awards.

“I don’t want to say it’s meaningless; it’s helpful, but it’s not going to make you a better filmmaker. Getting an Emmy doesn’t make you better; you’re still you; it just makes other people around you think you’re better,” says Kasbe. “Obama is just a person. He is just as screwed up as any person and so are the judges that watch my videos; they are just as right and wrong as the rest of
us.”

Instead, Kasbe cares more about the personal relationships seen in his work. In 2013, Mipso,a popular bluegrass band who got their start at UNC-CH approached Jon about traveling with them to Japan and filming a documentary.
Jon was immediately open to the idea. Joseph Terrell, one of the members of Mipso Trio, describes Jon as being extremely flexible, as someone who finds inspiration and runs with it.

“In Japan he had one pair of shorts, a t-shirt, and a gigantic jacket, “says Terrell. “He’s the ultimate example of someone willing to roll with the punches. He’s focused on his heart. He doesn’t care about material things.”

That same summer that Jon filmed “Mipso in Japan,” he also traveled to Fiji and Russia, with just his camera, a pair of sandals, a t-shirt, and shorts. He went from Fiji directly to Russia where he had no cold gear and traded his clothes for long pants and a jacket.

In return, Jon’s subjects are open to him. From expressing their worst fears, to letting Jon film them showering, to crying on his shoulder, people feel comfortable with Jon because of his easy-going approach to filming, forming relationships despite being behind the camera a majority of the time.

Kasbe didn’t always have this outlook on filmmaking, but he recalls the moment his mentality changed on filmmaking. It was when he was invited to speak in a panel of filmmakers and someone in the audience asked him why he chose that career.

“I had one of the most embarrassing moments of my life where I rambled for eight minutes, and I finally said, ‘I do this because I’m feeding off of people’s affirmation, and it’s fueling me.’ It was totally eye-opening,” says Kasbe.

From that moment, Kasbe decided to take six months off of school and figure out his priorities without touching a camera. When he started filming again, he had a newfound perspective that still guides him today.

“I really just want to fall in love with the meat of it. It’s people that I care about,” he says.

Jon’s love for humanity was obvious from our phone call, from his absolute candidness with a stranger who was firing questions at him. I found myself smiling throughout the interview and all the way home. I was inspired by this man I had never met, and I realized that was the same feeling he transcended to everyone who watched his films, a feeling of limitless possibilities, optimism, and
appreciation for human life.

Whether it’s his earlier work of “Chukke and the Rug,” “The Hustler,” and “Not at Home” or his award-winning films “Mipso in Japan” and “Heartbeats of Fiji,” do yourself the favor letting yourself be inspired by Jon.