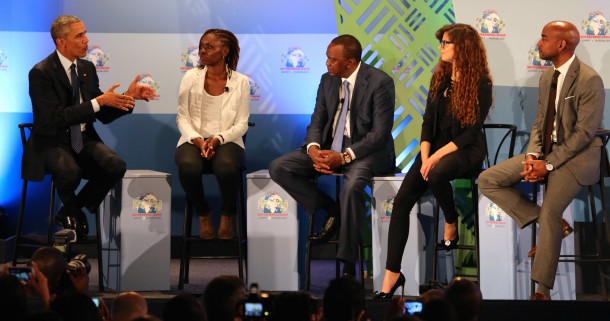 Obama’s Trip to Kenya and the Global Entrepreneurship Summit

President Obama caused a stir in Kenya this past weekend. As the first serving President of the United States to visit the country, Obama brought with him not only his personal ties but also business investments and an entrepreneurial agenda back to his father’s homeland. During the two-day Global Entrepreneurship Summit (GES) in Nairobi, Obama elevated young Kenyans’ entrepreneurial spirit through motivational speeches. He also engaged in public discussions with Kenyan President Uhuru Kenyatta and even took to the dance floor with family and friends.

Proudly announcing himself as the first Kenyan-American to have become the President of the United States, Obama especially received exuberant and warm welcome amongst young Kenyans. In a speech made amongst cheering and applauding Kenyans, Obama called on them to seek out opportunities in a positively changing time, he said: “Because of Kenya’s progress, because of your potential, you can build your future right here, right now.” In the same speech made to nearly 5000 Kenyans in a Nairobi gymnasium, Obama also used his bruised family history and his rise to become the first African American President as an example to testify to Africans’ strength to overcome difficult circumstances.

President Obama didn’t forget to address challenges that hold Kenya and Kenyan businesses back. He especially made an effort to list female oppression in Kenya as a bad tradition that severely limits the country’s overall productivity and development. Siding with Obama, President Kenyatta vows to clamp down on corruptions and join the U.S. in a fight against terrorist groups such as al Shabaab, which claimed 147 Kenyan lives this April at Garissa University College.

Despite all the praise of Obama’s efforts towards the African entrepreneurship and economy, his pro-LGBT remarks were met with disapproval in a joint press conference with President Kenyatta, who dismissed the punishable act of identifying as a part of the LGBT community as a non-issue in his country. According to the British newspaper The Independent, gay sex in Kenya could result in 14 years in prison while Kenyans within the LGBT community constantly face violent attacks and harassment.

Besides the clash, President Obama was also faced with the dwindling American influence in Africa as compared to China. The Nairobi gymnasium, named Moi International Sports Center, in which he gave an inspiring speech to 5000 Kenyans, was built by Chinese donations in the 80s and recently renovated with Chinese funding. Many of the roads, buildings and schools in Kenya and Africa at large are also built by the Chinese as part of a phenomenon that has been mostly accepted and encouraged by African governments. Confronted by the distant role of America on the African Continent, Obama vows to bring innovation rather than simply money and trade, which he perceives as the Chinese contribution, to African nations.

To push more trade with and investments in Kenya, Obama, along with a host of State Department officials and private sector corporations, has initiated a series of business mentorship, finance and innovation programs to help Kenyans use technology and innovation to boost the country’s economy. Wrapping up his historic visit to Kenya and participation in the GES, Obama called on Kenyans to realize their full potential in a country where rampant corruption, terrorist attacks and social discrimination of the LGBT and female communities could use much economic growth.