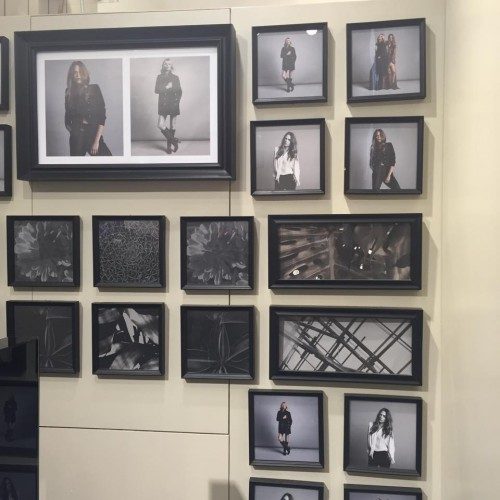 Saturday afternoons in Madrid consist of milling crowds everywhere, buskers on every corner and each square hosting metropolitan madness, encapsulating the city life perfectly. I settled down with my tourist essentials, a bottle of water and a notebook, to people-watch, observing which styles were most common and what stood out to me personally. 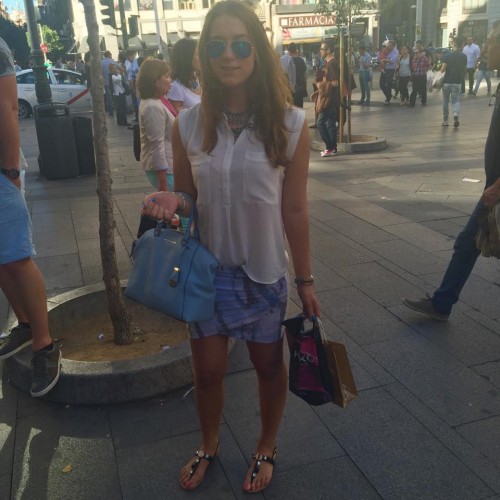 This tourist wore a style that struck a balance between casual yet consciously fashionable. She was clad in a loose button down sheer white shirt over a fitted snakeskin skirt with sandals and a designer handbag. I adored the pastel blue colour, it was tasteful and worked wonderfully – it is definitely one of the most flattering colours for every skin tone. It was an outfit that could easily transition from day to evening, with the skirt giving it an edge, but the shoes downplaying it and making it appropriate for daytime shopping. 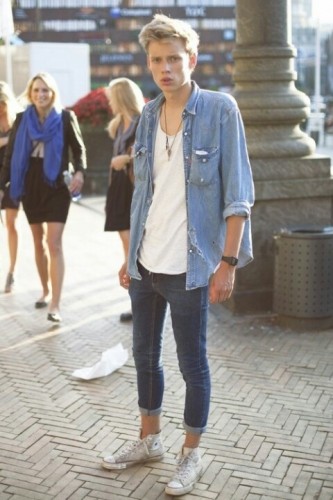 A particularly common style, especially amongst men was double-denim. It was often a light-denim shirt, worn open over a basic tee and then dark denim jeans. The look was broken up by either a hat or white sneakers and as someone who had never believed the look worked off the catwalk, I was surprised at how casually chic it looked. Far from the Britney-Justin nineties overkill, it was simple yet stylish – definitely disproving my misconceptions on the look. 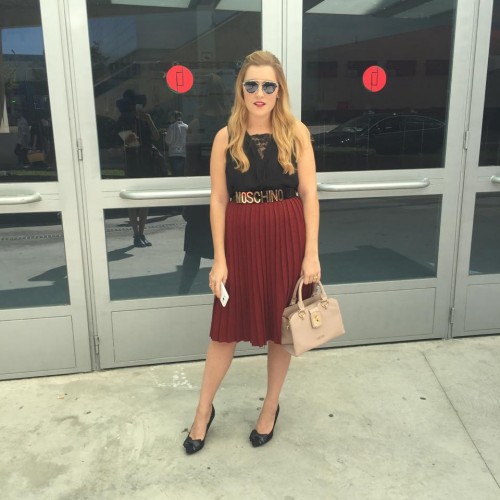 One look that really caught my eye was this classy skirt-top combo. The formfitting low cut black top, with a lace neckline, contrasted superbly with the pleated flowing deep red skirt. The burgundy skirt was a perfect pick for this time of year, an intermediate piece, and ideal for the summer to autumn seasonal switch. It was worn with a simple heeled court shoe which tied together the look nicely. The gold lettered Moschino belt had a slimming effect and brought the skirt in at the waist, giving the outfit a high fashion edge. and alongside the sunglasses the entire look was very young and trendy. 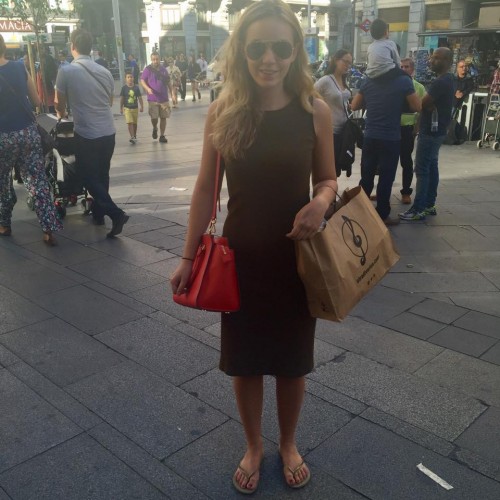 Another Madridleña had a look that encompassed laid-back weekend style impeccably. Her ribbed mid-length khaki dress was sleeveless and offhand yet stylish. The rounded sunglasses framed her face prettily, and adding to the nonchalance of her look she wore gold Havaiana flip-flops. Her look was completed by a statement piece – the bright tangerine Michael Kors bag that complemented the dark dress flawlessly. Tied together, the entire outfit gave me a model-off-duty vibe.

Spending time in Madrid and keeping an eye out for styles and trends is interesting because the city is such a melting pot of cultures and is home to a massive variety of people – I never know what I’ll spot! From tourists to students and everything in between there is no single trend that particularly dominates but that’s the beauty of fashion in a big city. Whose style is your favourite? Let me know on Twitter by using the #Glamour and tweeting @RoosterGNN or @sidraimtiaz_