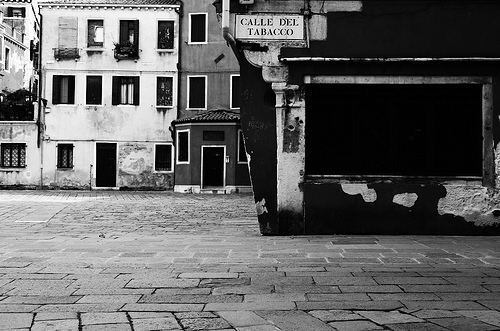 Venice is one of the most breathtaking and unique cities in the world with its ancient history and cultural heritage, but it is exactly this uniqueness and special identity which makes it an extremely expensive place, especially for tourists. Venice is astonishingly and overwhelmingly beautiful and Truman Capote was absolutely right when he said that

Venice is like eating an entire box of chocolate liqueurs in one go.

Eat as much chocolate liqueurs as you like, but be aware that a fraud might hide even behind a good dish of fried fish and a simple dinner might cost you 600 €, as it happened to a Danish couple two years ago. In addition, the first thing many tourists want to see as soon as they touch the stones of Venice with their feet is Saint Mark Square or the Rialto Bridge. No doubt such places are incredible, but Venice is much more than its only square and its great bridge. Follow me in some of the best hidden or less-known places of this amazing city. 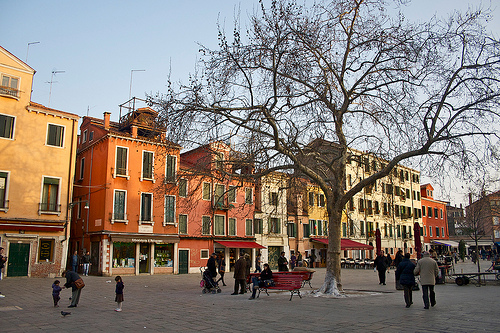 This campo is for people of every age: situated near the train station and the long “promenade” of Le Zattere, it is full of nice typical bars, provided with many benches, an open-air fish market and a bookshop. This is the place where all the students of Ca’ Foscari University come to drink a cocktail, relax and have fun at any time of the day or of the night.

Le Zattere are the fondamenta which lead from the Maritime station to Punta della Dogana. This way of stones is the perfect place to have a long, relaxing walk in the sunshine, from which you can enjoy the view of the isle of Giudecca, with its Basilica del Redentore, and the isle of San Giorgio. You won’t be jostled in the tourists’ mob and if you are lucky, you won’t find any cruise ship which interrupts the beauty of the view.

Campo San Giacomo is one of the biggest campi in Venice and is situated in the heart of the main island. Apart from the beauty of the place, this campo houses an extremely stimulating project: a communal vegetable garden of which children and citizens take care and grow vegetables and plants. As a matter of fact, in ancient times, Venice’s campi were cultivated as real fields and were an important resource for the economy of the city, yet along the years, the campi were progressively cobbled and the city lost many of its green spots. Therefore this project aims to bring back this activity in order to teach children the importance of growing healthy plants and vegetables and to give them the opportunity to have a green place in a city which is principally made of stones.

Calle Tredici Martiri brings you to one of the most poetic places of the city. This calle skirts the side of Bauer Hotel, near Saint Mark Square. Once you walked all the way through the calle you can enjoy the view of the beginning of the Grand Canal, Punta della Dogana, a triangular area which divides the Grand Canal from the Giudecca Canal, the isle of La Giudecca and the isle of San Giorgio Maggiore. My advice is to go there at sunset time when the sky colours everything in pink and gold. 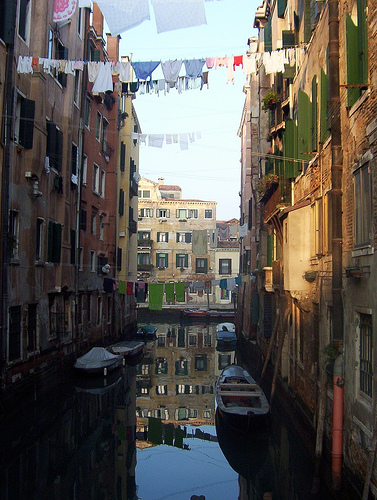 Venice’s Ghetto is the first ghetto ever created, the place from where comes the word and where the Venetian Jewish community resides. Despite its history and historical and linguistic importance, this place is not much touristy and is surrounded by a magical atmosphere. Furthermore, the Ghetto has the highest buildings of the city, since the continuous flow of new inhabitants along the years caused an increasing demand of new houses and the only solution, since Venice is an island and the boarders of the Ghetto couldn’t be broadened, was to add floors over floors of the buildings.

If you don’t want to spend a fortune in eating and drinking here are some cheap and nice places where to eat and drink. Around 11.30 or 18 is the time for a spritz: Campo Santa Margherita is recommended for its many bars where university students crowd to enjoy themselves. You can eat at Cafe Noir, near Campo Santa Margherita, the quality of food is high, the size of its sandwiches, salads, piadinas and hamburger is big and the prices are among the most honest of Venice. Finally, if you are not full yet, you can go to Tonolo, the bakery in front of Cafe Noir and have a good coffee and an amazing pastry for 2€.

Now enjoy your trip to the less-known Venice.

Calle: simply the streets of Venice.
Fondamenta: those calli which are not closed between palaces or buildings, but which directly face a canal.
Campo: Venice’s squares. Remember: Venice has only one Square, Saint Mark.
Campiello: a smaller campo.
Rio terà: places where once a canal used to flow and which were buried and made practicable to walk.
Spritz: the typical cocktail consumed in the whole Northeast of Italy, it is made of white wine – usually Prosecco – and sparkling water and a slice of lemon or orange. You can add Campari or Aperol if you like.