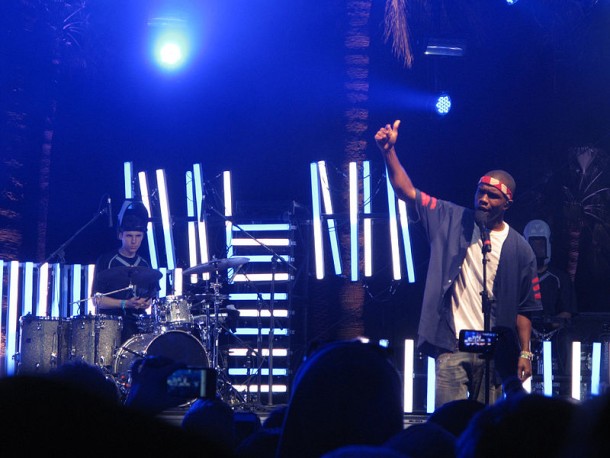 In the 4 years since Frank Ocean released his debut album Channel Orange, the hype has reached fever pitch for his second work and it does not disappoint. The hour long album comes a mere day after the release of his visual album Endless which showcased Ocean building a staircase within an abandoned warehouse to the swelling strings and atmospheric lo-fi electronics. Fans went wild and assumed this was Ocean’s tangential second studio release, this was quickly stymied as the very next day in a deal exclusive to Apple Music for two weeks, Ocean released the 17 track Blond. Initially thought to be titled Boy’s Don’t Cry, this latest effort from the master of suspense has exceeded expectations by being truly indecipherable.

From the outset, White Ferrari expands and contracts like a slowly collapsing black hole, Ocean’s vocals distorted through a wave of ambient electronic synths echo and expand until they sink away to nothing. This is repeated in Solo (Reprise) which surely owes a nod to Kanye West’s Life of Pablo, another complex album that unfortunately served more as a vehicle for an expression of West’s ‘Art’ than a vibrant new direction. Ocean’s rapping is fast and free flowing but with no retrospective nods to past works, his bars sparkle with wit and verve and segue neatly into Solo which is a more straightforward address of the hypocritical notions of fame and the supposed happiness it brings.

Subsequently, we are greeted to a sonic exploration of Ocean’s psyche which seems like a hurricane trapped underwater, especially in the swirling vortex of sound that greets the listener on Skyline to & Self Control which blends minimalist beats with another round of ambience which lulls the listener into a false sense security. This is succinctly disproved as Kendrick Lamar’s producer credits leave their indelible mark on tracks such as Seigfried and Pretty Sweet. Interestingly, the aforementioned tracks juxtapose spoken word rapping set to discordant strings, a looping set of angelic vocals and an Outkast drum pattern that screams Lamar’s influence. Importantly, it is worth noting that the plethora of producers credited on this album makes any true divination of the each specific influence or artist’s hand a difficult proposition. Indeed, the list is a wealth of talent includes the likes of Beyoncé, Kanye West, Pharrell Williams, James Blake, Jamie xx, Rick Rubin, and Tyler the Creator to name but a few. However, never do we feel that Ocean’s distinct aesthetic and creative vision is lost, instead of being superceded or outvoiced he adroitly combines the best of his work with that of his producers. For instance, on Pink + White, the neo-soul tinged piano and a simple drum pattern tick away at the back of your mind before resurfacing in lyrics which recall the colour of a Tequila Sunrise in downtown LA; Ocean mournfully opines that in the “wake of a hurricane, dark skin of a summer shade, nosedive in the floodlights” that he has felt lost but is now found. Similarly, this is echoed on the more straightforward Nikes where the distorted voice, high pitched but not grating, its slow beat and clear political message, especially its reference to the deceased Trayvon Martin addresses the BlackLivesMatter movement. Notably, this is less explicit than Lamar’s angry and defiantly raucous To Pimp A Butterfly yet Ocean’s resounding lyric “we gonna see the future first” bears the hallmarks of earlier introspective hits from Channel Orange. Curiously, this track contains a very similar denouement to Thinking of You from Channel Orange. Much like that heart rending message to a lover lost, the track Nights contains Ocean’s wavering falsetto and the lyrics “waiting on you all my life” set to a swooning orchestral climax interspersed with computer and electronic bleeps. This is strangely compelling listening up to this point and by the time the listener comes up for air we are thrown headfirst into the Weeknd influenced alt-RnB cruising of Ivy which along with the similarly tinged Good Guy offers a shift of gear. Ocean is approaching the end of his album yet oddly it hasn’t felt overly long, every track ends at just the right moment and does not jar against another. In fact, it seems to blend into one symphonic piece and as we reach the pulsating climactic two tracks we are left in a state of confoundment. For example, on Godspeed the words “I will always love, a prayer for you, the table is prepared for you” remind you poignantly of the aching power of Ocean’s voice and as the church organ swells into focus, Futura Free within a few melodic piano bars reaches the apotheosis of Ocean’s message. The lyrics “feel like im a god but i’m not a god” resonate as he truly has rejected the trappings of clear labels or easy categorisation. The mesmeric repetition of “Mama” at the end of every line should be enough to enforce this but akin to the beginning, we are left as confused as when we begun this journey.

Ultimately, Ocean’s second album feels like a slow wake from a dream we did not know we were having and as we are transported layer by layer, strata by strata upwards towards waking, we wish we could stay but a bit longer.