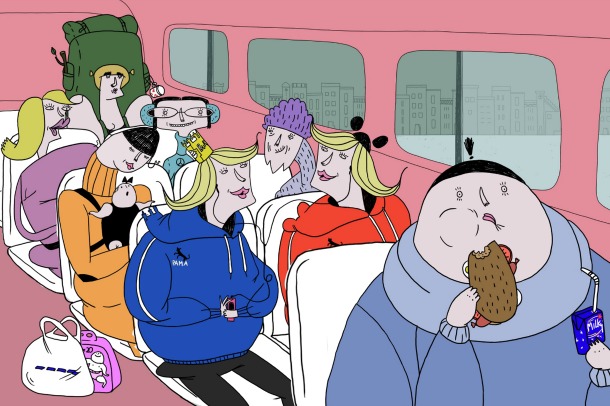 Hungarian Animation Film on the Way to Oscar Nomination

Fresh, crazy and colourful. There were lots of different comments about the Hungarian animation short film, Limbo Limbo Travel which is among the 60 animated shorts qualified for the Academy Awards in 2015. Until the 10 films getting closer to the Oscar nomination are announced, we try to go beyond the images and give word to the two young Hungarian talents, Zsuzsanna Kreif and Borbála Zétényi, the directors of the animation film. 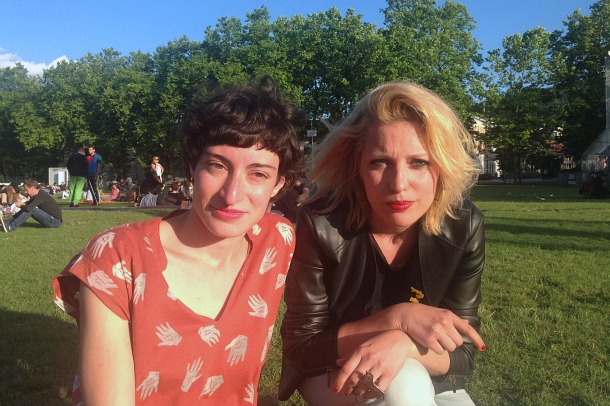 “In a country where men seem to be more interested in their electronic gadgets than their peers, a group of lonely and disillusioned women take the Limbo Limbo bus. Off to a far exotic country, they hope to find the so expected happiness. They land on an island populated by a tribe of moustache-men. This meeting triggers the primitive instincts of these women who, without caring about the civilized behavior rules, start chasing them and pushed by the competitive spirit, are ready to fight the forces of nature in order to capture their prey: the male” – this is the short description about the Hungarian-French short film Limbo Limbo Travel on IMDb.

How did the idea come to send eight women to the island of moustache-men?

Zsuzsanna Kreif: I have read an advertisement in a Hungarian woman magazine, where they were offering a Cuban trip to single women. I had the absurd idea that big women could fight for little men on an exotic island. Leaving the city life can be well confronted with the natural environment where they arrive during the journey.

Borbála Zétényi: And not so long after the idea was born, I received an email from Zsuzsi if I would like to join. We met, talked about it, laughed a lot already back then, and later on we started developing the film together.

Zs. K.: Firstly we wanted to include the islanders in the title, but in the end we called the travel agency Limbo-Limbo. We were thinking about changing it, but in the end we started to like it a lot. It sounds good even though it doesn’t make a lot of sense.

What kind of topics does the film explore?

Zs. K.: The animation film centres on men-women affairs, but the relations between the eight women forming the group is also important. In the beginning they could cooperate but as soon as they recognise the men, they get crazy and start to compete with each other. On the emergence of the mother nature, the mother-son bond also appears. When the mother of the moustache-men realises that the women can’t behave, the so called “mother-in-law jealousy” releases enormous forces of the nature. We tried to visualize all these topics and relationship with certain symbols. The moustache was proven to be a good tool: besides its first meaning it could also be used for communication and expressing emotions. The symbol of the mother is a cave, where little men could easily enter but the crazy woman has to stay outside. 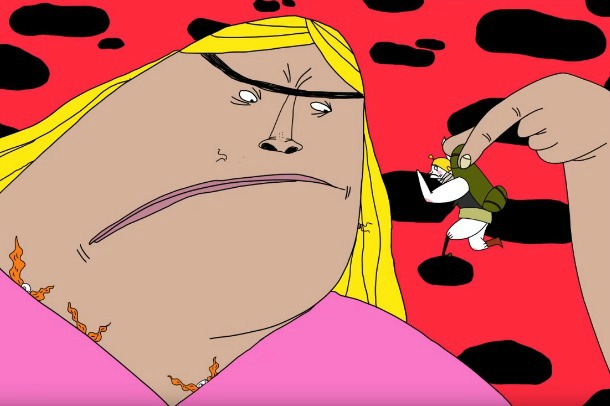 It is not even necessary to introduce the eight women characters. They don’t have to say a word and still you feel like you know how they are, just by looking at them.

B. Z.: The women characters are meant to be stereotypical, so that they wouldn’t need to talk. We didn’t want them to say sentences like “oh, yes, I’m in love with you, moustache man!” In our film body language plays a more important role and it is also easier for creating funny scenes.

Zs. K.: We wanted to pay more attention on action from the very beginning. The best part of the working process was to create the characters, their clothes and the fighting methods.

“We really didn’t want to recognize ourselves in the characters, but still we have to admit that we certainly did” – this is an extract from one of your previous interviews.

Zs. K.: They often ask what is our problem with the men. It is obvious that sometimes we put our frustrations in the film, it is very useful to draw this out of you sometimes. Still, it was definitely not a way of therapy, we wanted to create something more general and global than that.

Zs. K.: We were actually trying to show both sides, women and men as well with similar perspective: being critical, but humorous and kind at the same time. It seems like girls are more likely to create films about sex and relationships. Maybe we can joke easier with love related things. The boys touch this topics more rarely. 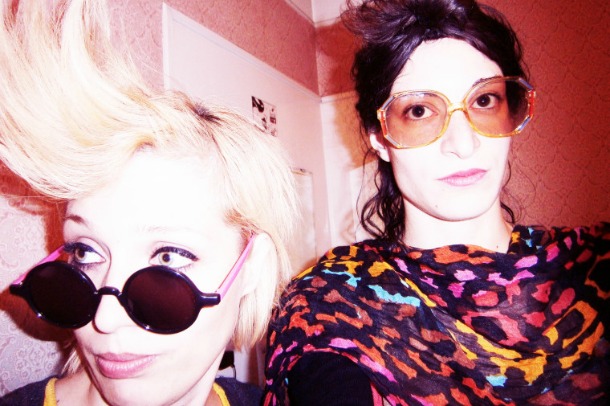 How was the reception of the film plan in the beginning?

Zs. K.: As for the beginning, the men professors at our university (Moholy-Nagy University of Art and Design) had some doubts about the film. Why are the men so small? We received similar questions to this, but later on they helped us a lot. As soon as the French coproduction started, this convinced them even more. They have seen that our French producer (Christian Pfhol) is a man, and still he can understand the humour of the film easily.

Since then a few years have passed… When did you finish the film? What are the reactions on the screenings?

B. Z.: We were working on Limbo for four years, in this time I have certainly grown some orange moustache. We have spent the best years with eight crazy women and the moustache men. The film was finished last November, exactly an year ago. The premier was on the Kiskakas Animation Celebration. When the film started, both of our heart was beating as fast as maybe never before. We were sitting in dead silence during the 16 minutes. At that time I thought the whole thing will just go to waste, it doesn’t make any sense. That day there was another screening, where the atmosphere was told to be much better. And on another film festival people were crazy about the film.

Zs. K.: We realised that people usually understand and like the film, they are laughing a lot during watching. On the diploma screening my whole family was there. And what was the first question of my mum? Why didn’t we give underwear to the moustache men? For her it was really hard to accept that they were all naked. 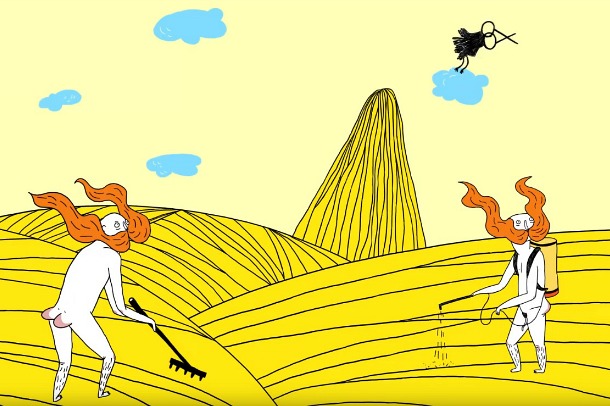 I guess there were some other strange questions regarding the film…

Zs. K.: A few days ago a guy on the bus asked whether he could see me on television. Are you the director of the Nimfo Limbo film?

B. Z.: What do the feminist think about your film? Have you ever been in a serious relationship? We often have to face these type of questions following the screenings.

Zs. K.: Once in France they asked whether our film is a reaction to the refugee situation in Hungary, as there are foreigners coming and the people don’t let them in. Well, I have to say we weren’t expecting this perspective to come up…

As we are talking about feedback from abroad. Do you have any news about the Oscar nominations?

B. Z.: Not yet, we can’t really do anything else than to wait. We are not sure, when the results are going to be announced whether we get in the top 10 of the 60 qualified films. Last year, they already announced the finalists in the beginning of November, now the date is postponed.

Zs. K.: There is a list. If your film is winning on one of these important festivals, then it is automatically qualified for the Academy Awards. With Limbo Limbo Travel we won the Silver Dragon for best animation at the Krakow Film Festival, that’s how we got in the first 60. 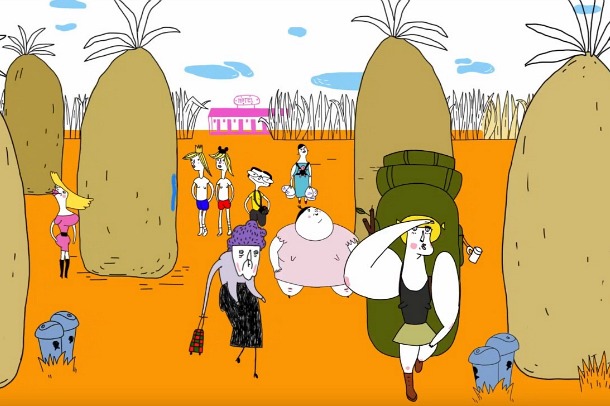 What do you consider the strength of your film?

Zs. K.: More people told that the graphical design of the film is very brave and fresh. The short film sections at festivals are often full of brown and dark films. It seems like the audience and the critics liked that this one is less serious, more funny and colourful. But still, there is something melancholic in it.

Do the women find true love in the end of their quest?

B. Z.: Everyone should answer this question after watching the film.

Zs. K.: In our version this doesn’t work out, but mostly because the women are crazy. Finally, they find a place where they could be happy, but they have to cope with so many frustrations, that they can’t live with the opportunity. We received some critics regarding that: why are we so negative, are we suggesting that women can’t find their place anywhere? Well, we just didn’t want a happy end…