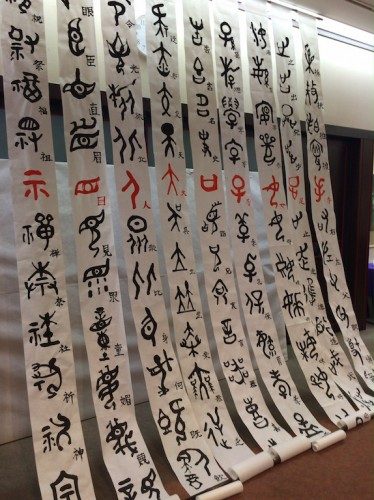 The contemporary Japanese language uses 3 scripts: Kanji, Hiragana and Katakana. Hiragana and Katakana, collectively known as Kana, are syllabic scripts derived from through man’yogana 万葉仮名, or phonetic sounds of kanji 漢字. The latter is commonly used as transliterations for gairaigo 外来語, or loans words from other languages in a modern Japanese context. Kanji is a logographic script and the oldest of the three, originating from ancient Chinese characters. Kanji was first introduced to Japan in the 1st century. Prior to that, there was no written form of the Japanese language. Literacy only began to gain traction in the 5th century, where texts were comprised solely of Chinese characters.

Ancient Chinese characters or hanzi 漢字 are known to have been first recorded around 1000 to 1500 BC, inscribed on tortoise plastrons and ox scapulae for divination uses through heating and interpreting the crack patterns. These oracle bones documented the communications between the heavens and the king of the Shang dynasty in China. The characters are a mix of hieroglyphic elements of nature and the cycle of life as well as abstract symbols. The approximated 85000 and 50000 characters recognized in Chinese and Japanese dictionaries respectively are derived from the incompletely identified set of 4000 hanzi.

“Artisanal spirit is an asset to Japan. There is no lack of it in Japan, and deserves focus, a close-up look at the talent they have to offer. With this collaboration with artisans and craftsmen, I hope to bring a change in my, artisans’ and audience attitudes.”

Kodai moji 古代文字 literally translates to “ancient characters”. Under the apprenticeship of renowned ancient character calligrapher Koho Kato since 2000, Japanese script and calligrapher Ten-You puts an artistic spin on traditional characters, transforming them into art that expounds the beauty and meaning of nature and life. She held her first overseas exhibition in New Zealand and became independent in 2007 while founding the Kodai Moji Artist Group, Ten-You Gumi. Since then, she has expanded her work and events internationally at New York, San Francisco, Paris and Barcelona, which also include awareness efforts for the 2011 Tohoku earthquake.

“My calligraphy lesson taught me something incredibly important and that I hope to use in my work. Ten-You taught me to trace a simple line and I tried to do it right and fast, as a good pupil SHOULD. She told me it wasn’t right, that what I had to do was put my spirit behind it. Drawing a line became an entirely new experience.”

In an interview with the Education Journal of Gakken, she explains why the root of the human spirit lies in ancient script.

“Children express themselves more through images than words. While adults are more familiar with characters and their associated meanings, children are able to tap on a free, intrinsic understanding of the character form and bring a different perspective of art.

The Ten-You Gumi works out of the Tennoji Jozendo temple in the district of Yanaka in Tokyo.