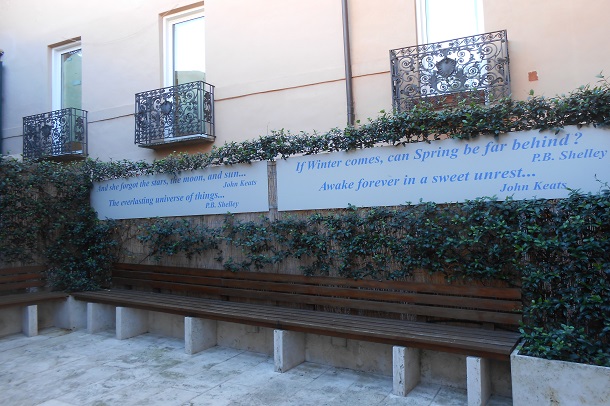 A thing of beauty is a joy for ever:

its loveliness increases; it will never

The last unhealthy and sick days of John Keats, the English Romantic poet, were spent in Rome, since in early 1820 he became ill with tuberculosis and was forced by the circumstances to move to Italy seeking a milder and more favourable climate to recover. He died in 1821, in a small house in Piazza di Spagna at the base of the Spanish Steps. Today this house on the second floor of the building is the Keats-Shelley Memorial House. 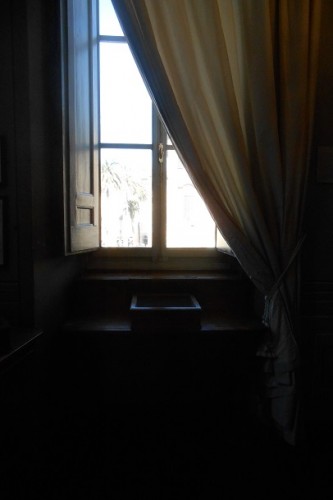 The unsuspecting travellers might easily and unconsciously bypass the Keats-Shelley Memorial House when in front of the grandeur of the Spanish Steps, especially if they reach Piazza di Spagna from the metro station, a route which almost forces you to pass in front of an expensive tearoom. At this point the unsuspecting travellers will be so struck by the beauty of the Steps and the square and by the prices of the famous tearoom that their eyes won’t be struck as well by the building on the right of the Steps. Last year I risked to be an unsuspecting traveller myself: if I hadn’t stopped on the steps of the Memorial House to find some shade to recover from the burning October sun of Rome, I would have completely missed the memorial. Astounded and stupefied I called my friend and fellow-literary-traveller, who was touristing on the square, to show her the plate which signalled the presence of the long-before died poet in that place. At that point, both astounded and stupefied, we opened the door of the memorial and entered. 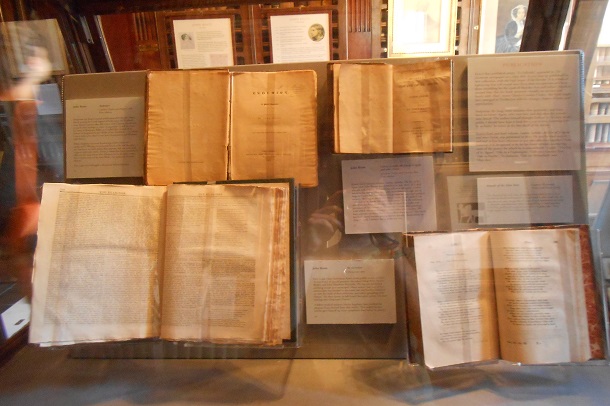 The Keats-Shelley Memorial House is very small but it hosts a huge library, installed after the death of Keats and created by Harry Nelson Gay, which contains volumes of the nineteenth and twentieth century and also first editions of Keats’s and Shelley’s works, among which Keats’s Poems of 1817, Endymion and Lamia, Isabella, The Eve of St. Agnes and Other Poems and Shelley’s Adonais, Alastor, Prometheus Unbound and the 1824 Posthumous Poems. In addition to the library, the memorial houses Keats’s bedroom as similar as possible as it was in the days Keats dwelt in Rome, as a matter of fact both the fireplace and the ceiling are original.

After the Keats-Shelley Memorial House, let’s continue our tour on the Italian traces of the British poet. Near Piramide metro station is located the Non-Catholic Cemetery of Rome. Here, among the graves of many well-known artists and politicians such as Gregory Corso, Carlo Emilio Gadda and Antonio Gramsci, John Keats and Percy Bysshe Shelly rest. High brick walls protect the cemetery from the annoying noises of the surrounding traffic, and once inside the rest of the world disappears and the blue, crystalline atmosphere leads you to believe for a moment that you are no longer in the catholic and chaotic Rome, but in an English garden outside the present time. In an intricate maze of plants, gravestones and some cats, which the real masters of the house, my fellow-literary-traveller and I found the way first to Shelley’s and then to Keats’s grave, which is in a peaceful garden where the cats guard the place where

… lies One Whose Name was writ in Water. 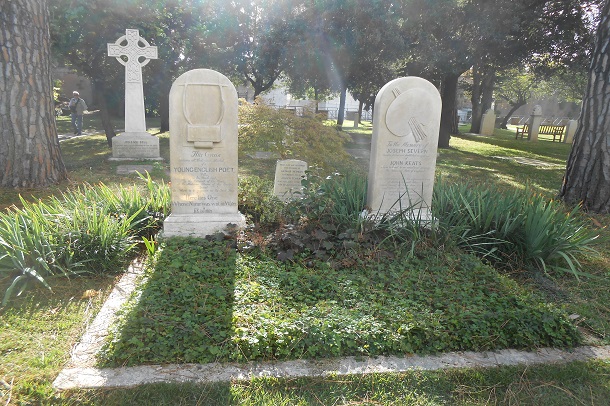 Like many other historic cities, Rome hides many surprises, like the Keats-Shelley Memorial House and the Non-Catholic Cemetery. You can visit the cemetery and then reach the Ghetto without taking the tube, simply walking along the Tiber and, along your way, you might find out many hidden places and details that the majority of tourists do not bother to look for.

Enjoy your visit to Rome and don’t forget to pay a visit to Keats and Shelley, trying to bear in mind that “A thing of beauty is a joy forever”.