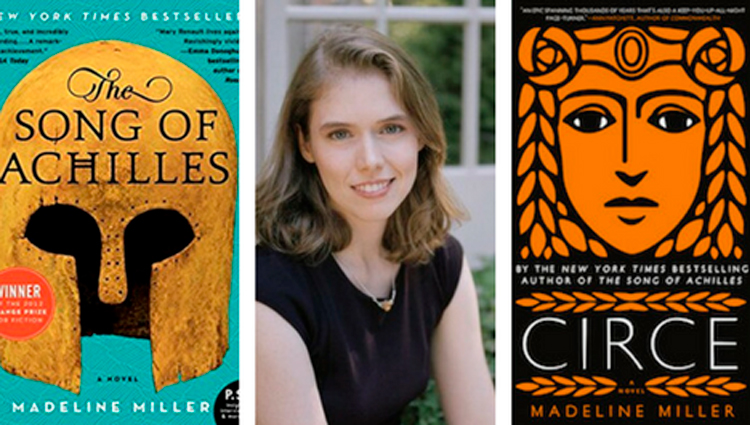 The author and her publications | Madeline Miller

Rewriting the Classics: An Interview with Author Madeline Miller

Madeline Miller received her BA and MA in Classics from Brown University and teaches classical languages to high school students. She is the author of the 2011 best-selling novel The Song of Achilles, a retelling of Homer’s The Iliad, and, more recently, Circe. Circe was published this past April and retells and expands on the story of the titular character, a witch most famous for her role in The Odyssey, transforming elements of her original story and elevating it into a feminist tale of love, loss, strength, and individualization.

1. With both of your books you have granted a voice to those who are often overlooked in myth. Was this a deliberate decision on your part?

I absolutely wanted to give voice to these characters because I felt they had been overlooked.  I was compelled by their stories, as well as by the mystery surrounding them.  In the case of Patroclus, I wanted to understand who this man was whose death could so destroy Achilles.  With Circe, I wanted to see the rest of her life—who was she before she began turning men to pigs, and who did she become after Odysseus left?  Both stories—that of two men in love, and of a woman’s life, are tales that have often been suppressed and whitewashed.

2. Like you, I have always been fascinated with Circe, especially given the different characterizations of her found in Ovid’s “The Story of Glaucus” and the brief scene featuring her included in The Odyssey. Before your latest novel, the only (somewhat) positive depiction of her I have encountered was in a poem from Louise Glück that, while empowering her, did not attempt to make her sympathetic. What was it about Circe that inspired you to portray her this way? 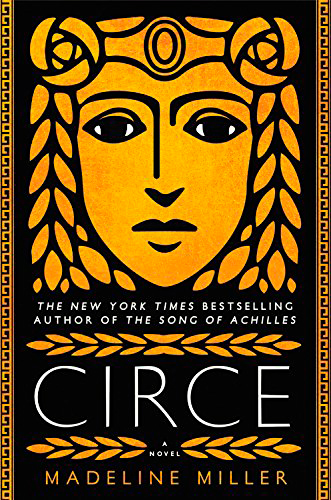 Over the years Circe has often been portrayed as a villain, or at the very least as a man-hating seductress.  But that’s not the character Homer gives us.  Although she does turn Odysseus’ men to pigs, after the two come to an understanding, she changes them back and becomes one of the most helpful figures that Odysseus encounters.  She invites him to stay on the island and regain his strength and grieve the comrades he has lost previously. He stays for a year, and when it’s over, he’s reluctant to leave—he has to be prodded by his men.  She gives him vital advice about the perils and obstacles ahead.  So the benevolent side of her had actually been a piece of her character from the beginning, and I wanted to bring out that complexity and duality, rather than the one-dimensionality that female figures from myth are often given.

3. I was incredibly touched by Circe’s interactions with Penelope in your novel. They felt incredibly genuine and it was inspiring and refreshing to see two women who would presumably be at odds still band together for the sake of their families and refuse to blame each other for the actions of a shared love interest. This seems to extend to all of the women which feature in your books, from the two central women in Circe to Briseis, Thetis, and even Pasiphae. For Circe, specifically, the women are given a chance to have their side of the story heard regardless of what they have done or what they are being stigmatized for by their individual societies.

Thank you, that is very kind!  All of this was the bedrock of both books.  In The Song of Achilles, Briseis and Thetis were key pieces of the novel from the very beginning—I wouldn’t have written the novel without them. Thetis spends much of the action as the antagonist, but she’s never a villain.  I have great sympathy for her situation: she’s a goddess, yes, but the weakest possible type of divinity, and no matter what she does, she can’t save her son’s life.  Add to that her horrendous marriage, and the fact that she was treated as a pawn and property by Zeus. I wanted a similar three-dimensionality to Medea and Pasiphae—to all the characters, really, men and women alike, but male characters have been given that kind of complexity for centuries, and female characters often haven’t.

In Circe, it was such a pleasure to have Penelope waiting for me in the last stretch of the novel! I was thrilled that the mythology brought these two very intelligent, complex and interesting women together.  It seemed clear to me that they would find common ground—they are wise enough by then to understand that the real enemies are not each other, but the hostile world around them that would take their independence and autonomy.  Circe spends so many years longing for a female friend who can understand her.  In Penelope she at last finds that—their relationship represents the closing of one of the most, to me, poignant threads of the novel, which is Circe’s desire for true and genuine connection.

4. In what way do you think bringing Circe to the forefront – especially in regards to her relationship with Odysseus – changes the themes and tone of The Odyssey? 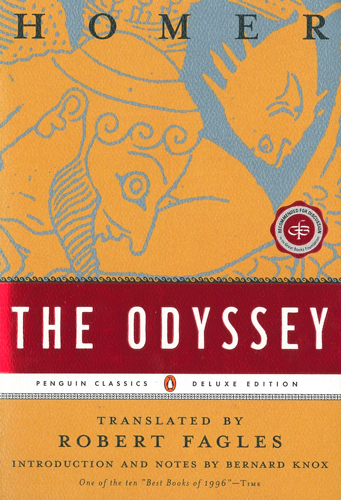 I wanted the story of Circe and the Odyssey to have core similarities—the Odyssey is, despite all its monsters and gods, the story of an exhausted man trying to get home.  Circe also yearns for home—but she’s not so lucky as Odysseus, there’s no Ithaca waiting for her.  Instead, Circe has to discover what that home might look like, and then struggle to make it for herself from the ground up.

I also see differences between the two stories—Odysseus is at heart a creature of self-interest.  Circe meanwhile spends her whole life wanting to do the right thing.  She often fails at this spectacularly, but she always comes back to that impulse.  I see in her a different type of heroism than the splashy kind of the men in the Iliad and the Odyssey—instead of vanquishing monsters and killing (though she does some of that), she is focused on trying to live ethically, on making the world a better place.  She is trying to wield her power without abusing it.

Shifting the focus to Circe does a few different things: It highlights that there are other paths to heroism, it argues that the traditional male heroic narrative is not the only story we should be listening to and I think it also helps to show Odysseus in a different light.  He’s a beloved character—so clever and charismatic, quick thinking and resilient. But he’s also a very unappealing figure in many ways—quick to anger, brutal, greedy, self-absorbed, and slippery.  He’s obsessed with his own reputation.  He’s fun to hear stories about, but I think it would be painful to live with him.  By telling the story through Circe, I think that some of those aspects are revealed.  He becomes a much more ambiguous figure—which is an interpretation that the ancients absolutely supported.  Our lionization of him—in poems like Tennyson’s Ulysses—is called into question.

5. One of the things I have noticed in both of your novels is the conflict between the mortal and divine – in particular their different approaches and reactions to love. How do you think this translates to our society, in which the belief in these Greek Gods is no longer relevant?

The Greek gods had absurd amounts of power and wealth, and their position made them immune to most consequences to their actions.  They acted on whims, and didn’t care who they hurt, as long as they pursued their own gratification.  They were spoilt, so used to getting their way that even the most minor obstruction caused them to lash out with brutality.

Unfortunately, such figures are still with us.  There will always be people who have absurd amounts of power and resources, whose position makes them act as if they are above the law.  There are psychological studies which have shown that, unless you fight against it, the more power and money you have, the less empathy you show.  The Greek gods are a lesson, I think, about what happens to us when we forget that we are all part of the human race, all striving for dignity and a place in the world.

6. Given the recent political climate, Circe seems more relevant than ever before. Did the #MeToo movement or the recent rise in the fight for women’s rights have any impact on your writing near the end of the process? If not, how do you think Circe aids or reflects this movement?

I started the book seven years ago, before the #MeToo movement, and the recent revelations.  As they started to break, I was in the final round of edits, and it was eerie to see so many of the themes I was writing about showing up as front-page news.  But I think that this just goes to show that women have been dealing with these issues of abuse, silencing, and discrimination forever.  We have made progress, but we have a long way still to go.  There’s a negative stereotype about the “angry feminist”—but why shouldn’t women be allowed to feel angry?  We’ve been fighting the same fights for thousands of years!  The project was feminist from the beginning: I wanted to take a woman’s story, and a woman’s life, and set it at the center of an epic.  This included things that aren’t traditionally allowed in epic, but that are a part of many women’s lives—things like childbirth and motherhood. At the same time, I wanted to highlight a culture that was generally abusive, to men and women alike.  Circe finds many who suffer in its cruelty, not just herself.

7. In Circe, we get to see her interact with her niece, Medea, who is also a witch and faces ostracization as a result. She handles this very differently from Circe. What do you think accounts for this difference, or is there even truly a difference here?

Medea was fascinating to write about. She and Circe are the two great witches of ancient literature, and they’re related too, aunt and niece, so I was eager to imagine the scene between them.  In my version, they actually share a fair amount: they are both passionate, somewhat reckless, both proud and powerful.  But Circe is older and wiser, and has learned from her mistakes. She has found a way out of the tangle of her family’s cruelty.  The fact that she has suffered makes her want to be kinder.  Medea was raised by a cruel father, and she has learned not kindness but to protect herself at all costs.  I think that both of these responses are common among people who suffer as children, and both are understandable in their way.

8. What is the one thing you hope readers take away from your versions of these myths? 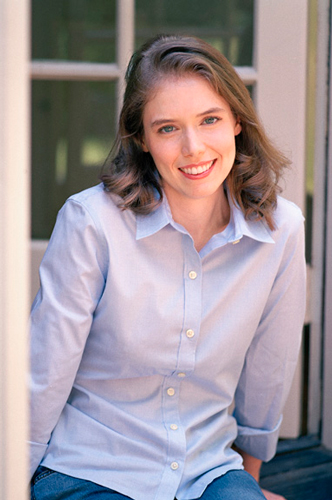 That these myths belong to everyone.  I think sometimes people are intimidated by them—they believe that they are only for elite readers.  But that’s not the case at all, and never has been.  Homer’s poems were passed down from generation to generation through oral tradition—they were stories told by grandparents to their grandchildren, they were stories everyone knew.  And they have lived because they are such potent tales of human nature.  So many thousands of years later, they still hold the mirror up: we still love and grieve, hope and despair, go to war, and yearn for peace. If we look past the chariots and spears, these ancient stories are incredibly modern, and have much to teach us about ourselves.