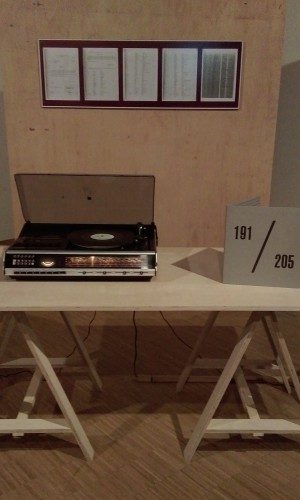 The Cultural History of Turkey: How Did We Get Here?

An exhibition titled How Did We Get Here? is welcomed in one of the most famous art gallery, SALT, in Istanbul between 3 September and 29 November 2015 and the exhibition is a part of a program organized by L’Internationale named The Uses of Art – the Legacy of 1848 and 1989. The artists Halil Altındere, Serdar Ateşer, Aslı Çavuşoğlu, Barış Doğrusöz, Ayşe Erkmen, Esra Ersen and Hale Tenger were focused on the political and cultural life under the repressive effects of the 1980 coup d’etat in Turkey within the framework of neoliberalization and authoritarianism at the same time.

Restrictions and Censorship in Turkey

In my opinion, the most interesting part of this exhibition is the way of approaching the political atmosphere and social movements in Turkey between 1980 and 1990  through looking the elements of popular culture; important newspapers and magazines published in those years, the popular movies and the numbers of cinema audience and the issue of censorship in Turkish literature, media and television at that time; because the art and the activities within the cultural life of a country in a certain period can clearly express the political atmosphere in terms of political and social liberties and human rights.

The Creative Work Rising from the Restrictions

The aftermath of the military coup of 1980 in Turkey is actually the years of restriction and suspension of many civil liberties similar to other countries that are experienced coup d’etats and censorship was one of the most crucial problem regarding the cultural life and media between those years as displayed in the exhibition. For instance, many artists were banned to sing on television since there was only one TV channel which belongs to the state. Moreover, this state owned TV channel, TRT, banned 205 words, as I saw through Aslı Çavuşoğlu’s work in the exhibition titled 191/205 including very innocent words such as freedom and nature. The artist even made a song with the selected 191 banned words with a rap singer Fuat which I found very creative work.

The exhibition also displayed the major decline in the number of movie theaters and cinema audience from 1980 to 1990 with the increasing intervention and censorship to the sphere of art. For instance, the number of the movie theaters in Turkey was 941 in 1980; however, the number decreased to 354 in 1990. Also, the total number of moviegoers drastically declined from 62.580.503 in 1980 to 19.233.976. Another effective piece in the exhibition to understand the impacts of the coup d’etat and the following process of authoritarian interventions in the Turkish political and cultural sphere was the manifesto that was signed by the intellectuals of those times in order to illustrate the concerns and wishes regarding the democratic system. The demands of those intellectuals stated in the manifesto were, in short, the removal of all the censorship and restrictions on the books, movies, media and artists.

How did we Get Here?

Those numbers and the pieces in the exhibition, I think, helped people who lived those dark times to remember what happened as well as they become a guide to learn the political and cultural history of Turkey and understand the politics of today for people who was born after 1990 like me. Therefore, it can also be understood from the title of the exhibition, the artists really helped us to understand the evolution of cultural and political life in Turkey and directed us to think about the oppressive effects of the military coups in general.