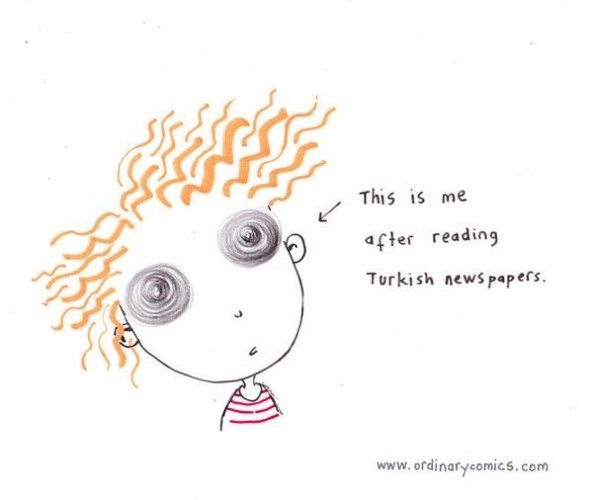 Özge Samancı and the Ordinary Things

Özge Samancı is a Turkish artist and academician who are currently lecturing at Northwestern University, United States in the Department of Radio, Television and Film; and she became a widely known comics artist especially after publishing her autobiographical graphic novel, Dare to Disappoint: Growing Up in Turkey, in November 2015. Although she created and continues to create in various fields of art such as video and animation, photography, collage and media art; what really interests me in her works is that the way she implies the social, political and historical events and routine in Turkey through drawing the very ordinary things in our daily lives.

Growing up in Turkey

However, in Turkey, the daily routine is the thing that is actually painful since the conservatism, nationalism and sexism systematically penetrated the lives of the people who live in this country throughout its history. What Özge Samancı did in her book, Dare to Disappoint, is that she drew her journey of self- discovery while narrating the tense atmosphere of Turkey when she was a child in 1980s. The politically polarized, economically unstable, conservative and militaristic Turkey and the effects of this atmosphere on a little girl’s current and future life are drawn in the book; thus, we as readers started to learn about both the history of those complicated times in Turkey after the 1980 coup d’etat and the ordinary life of a secular, middle class Turkish family.

The Importance of the Ordinary Things

The style of her comics and their familiarity to people who are living in Turkey provide the reader a ground for questioning the unquestioned and ordinary things which are actually very problematic.  The ordinary things in life, I think, besides revealing the political implications of their time as a background story, also help us to discover ourselves, force us to think about the human relations, family, friendship and our wishes and fears. Özge Samancı, similar to her works in her book, is keeping an online journal since 2006, namely Ordinary Things where she is publishing a comics or a collage about an ordinary thing in life per day.

Comics as a form of News Reporting

The drawings and collages are sometimes very funny and familiar; sometimes they become a sort of report since the caricatures tell a political event which is happened that day of the journal. For me, the usage of comics as a sort of information mechanism is really important in terms of conveying those horrible and depressing contexts of the news through a funny medium and catching attention. Moreover, Özge Samancı uses English in her works and it is really helpful to reach the followers all around the world and give at least an idea about the history and the current political atmosphere of Turkey through an enjoyable way.