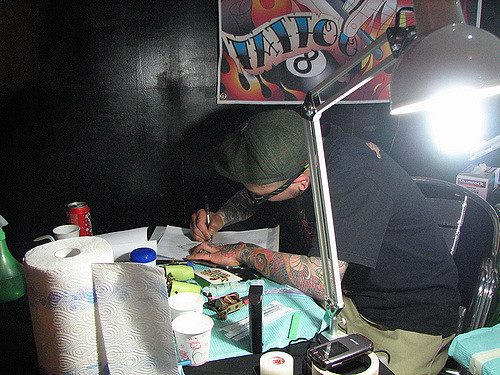 Art is everywhere we look; it’s on the walls of museums, galleries and streets, inside the human mind, and on the human body. The art of tattooing has been part of the history of humanity since the time of the recorded history.

Depending on the culture, tattoos have been made for different reasons. In Ancient Egypt, tattoos were given to male leaders. However, for the ancient Greeks and Romans, a person with tattoos was either identified as part of a religious sect or as a criminal or slave. Tattoos exemplify how people seek to find a deeper connection to the spiritual and symbolic through body modifications.

Today, it is incredibly common to encounter people with tattoos, you might even have one or more yourself. However, whether people can show their body markings freely and even do so in front of their families will vary by country. Many around the world enjoy the freedom of wearing body art and feel less pressured to hide their tattoos but such is not the case in South Korea, where this ancient art, practiced all over the world, is still illegal.

South Korean authorities have banned the practice of tattooing under the pretext that carrying out a procedure in which the skin is punctured and bleeds under unsanitary conditions can be the cause for potentially mortal diseases such as HIV. With this in mind, tattooing is only acceptable when done by someone holding a medical certificate at a specialized medical facility.

As a consequence, South Korean tattoo artists have opened tattoo parlors underground throughout the cities of Seoul, specifically in the district of Gangnam. Even though most of these parlors are popularly known around the city, police tend to raid these quite often. This, however, has not stopped tattoo art from becoming increasingly prominent in South Korean youth culture. Cultural changes throughout history prove that it often takes the older generations some more work to get used to the taste and likes of the youth. In an interview with I-D Magazine, a young South Korean woman named Su Jin reveals to her parents images of her tatted back and arms. The dramatic reaction from her parents’ as she shares with them a part of herself she has not only kept hidden from her family but from the rest of society shows the older generation’s conflictive relationship to this generational bridge. Historically, tattoos have been considered taboos in South Korean society, under the perception that only criminals and gang members have marks in their bodies. Recently, however, more celebrities like K-Pop star Jay Park have revealed their body art to their fans, hastening the acceptability of tattoos amongst younger members of society. Normalizing body art is a challenging undertaking for those who are passionate about tattooing, considering that oftentimes if seen with a tattoo —specifically one located in the torso, as a gang member would have— one is less likely to be allowed entrance into gyms and public baths in South Korean cities.

Tattoos are a means of self expression, not only for those who get them, but also for those who draw them. It is difficult to understand why other forms of permanent body alterations such as getting blepharoplastic surgery to increase eye size or getting breast implants is more acceptable amongst South Koreans than tattooing. In an attempt to increase visibility, artists have begun to use social media to advertise their art to potential clients, considering that mainstream advertising is definitely not an option for a technically illegal practice. Perhaps appealing to the younger crowds is the only way in which tattooing in South Korea can break free from its taboos. Meanwhile, South Koreans will have to enjoy the thrill behind biting the forbidden fruit.