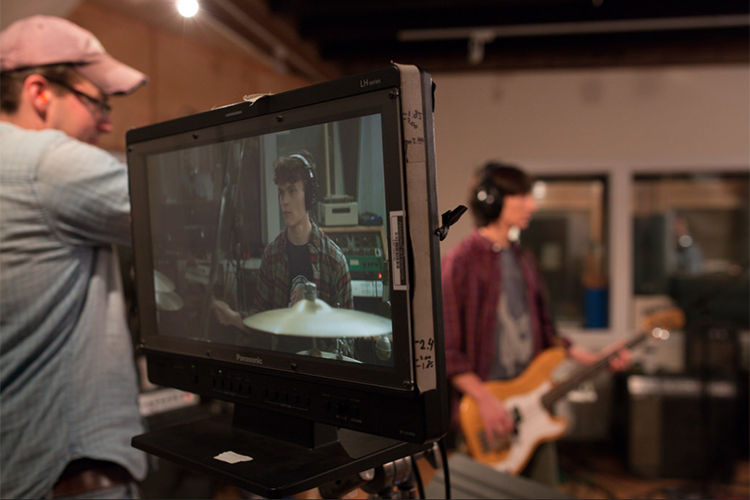 On the set of “No Alternative" | Joshua Sarner

William Dickerson is working to fight the stigma of mental illness. Dickerson, a seasoned filmmaker, known for such films as “Detour” and “Don’t Look Back”  is now in the midst of a particularly personal project. His new film “No Alternative”, also based on Dickerson’s novel of the same name  is a poignant and loving tribute to his sister, Briana, who suffered from Borderline Personality Disorder (BPD) and substance abuse, ultimately passing away due to an overdose.

I first connected with Dickerson via Twitter, and found his campaign to fund “No Alternative” to be incredibly important not only as a tribute to his sister, but as a way to reduce stigma of mental illness and raise awareness of how mental illness affects both sufferers and their loved ones. As someone passionate about mental health advocacy, I was drawn to Dickerson’s project, and impressed with his dedication to the difficult work of funding films independently. I asked him if I could discuss “No Alternative” in further detail via email.

Before diving into these questions, a brief synopsis of “No Alternative”  – the film, set in the 90s, is a coming of age story. Focusing on two teen characters, Thomas and Bridget – who mirror Dickerson and his sister – “No Alternative” explores Thomas’ obsession with starting his alternative band. In the process, Thomas’ fixation on his music disconnects him from Bridget’s deteriorating mental health, as well as her own music that refuses to conform to what is typical of her and Thomas’ generation.

CF: When did you first want to become a filmmaker? What drew you to this career path?

WD: I was about 10 years old and it was while I was watching an episode of “Twin Peaks.” I didn’t know it at the time, but I happened to be watching one of a handful of episodes directed by David Lynch. I had watched a lot of movies and seen plenty of television before then, but this was the first time I recognized that there was a creative mind behind it all, who was in deft control of my emotions. At that moment, I knew I wanted to learn how to do whatever the “maker” of this show was doing.

WD: There is a big challenge that Hollywood presents, which is to say, coming of age films are largely frowned upon. The studios consider them films for niche audiences. The studios have focused, rather myopically, on blockbuster four-quadrant films that appeal to the broadest demographic possible. This mentality undercuts the originality, and consequent strength, of the art form. The narrative of “No Alternative” explores the pop culture scene in the early 90’s, and examines hot button topics including suicide, depression, drug addiction, race and the teenage angst and alienation that were inextricably linked to the time. Kids who came of age in the 90’s, as in so many eras, felt alienated from their schools, from their families, from themselves. But it was unique to the 90’s that feeling alienated was an essential part of the culture. They had the counterintuitive advantage of being alienated together. The popular music of the time was the glue that kept them connected. The theme of alienation runs strong in this film, and the world of the 90’s supports it.

CF: In the film, Bridget finds solace and expression in rapping, as did your sister, Briana. Do you think there is something specific about the genre of rap that helped your sister and this character cope with the struggles of BPD and drug addiction?

WD: There was “The Lost Generation,” “The Beat Generation” and, in the 90’s, “The Suicide Generation.” It was a generation marked by the alienation I mentioned above, and teenagers sought an escape route. For Bridget, that means escaping one culture and entering another, as she takes the persona of a Gangsta’ Rapper. She paints, she writes, she tries to funnel her angst and anxiety through art. But the only thing that works, that allows her to become herself, ironically, is when she becomes the Gangsta’ Rap persona of “Bri Da B.” I think that’s because this persona is the farthest thing away from the personas she encounters in her everyday life. BPD, in many ways, is an extreme social disorder; becoming someone so different from who Bridget thinks she is– or she thinks the people around her thinks she is– is liberating. It gives her comfort.

CF: Following up on the previous question, do you find that filmmaking provides you with ways to express different parts of yourself akin to how Bridget and Brianna have used rap? If so, in what ways?

WD: For me, I’ve found that visual storytelling comes most easily to me. It’s almost second nature. Through filmmaking, I find that I can express myself in ways that I can’t usually express myself. That is quite liberating for me.

CF: Is there a character in the film whom you most relate to?

CF: BPD and drug addiction are illnesses that are heavily stigmatized (as is suicide) – what would you like people to know about the realities of these illnesses? What would you say to people who are wondering how to combat mental health stigma in society?

Dickerson and crew have already raised an impressive amount of over $50,000 via an Indiegogo Campaign, but still needs your help! Please consider contributing to help support independent film and mental health awareness and advocacy.