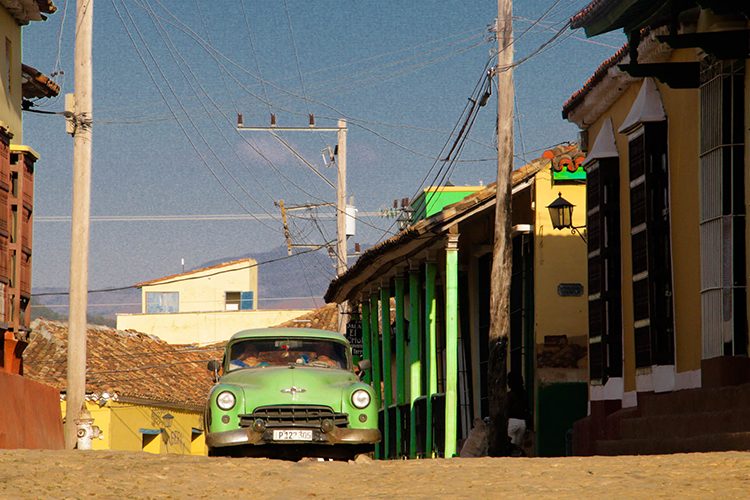 Feasting On the Culture of Trinidad

Jessalyn CastroJanuary 29, 2017
CubaTravel0 Comments 1
The following article is published in the #RGNNCuba Magazine: Vol. I, Winter 2017, produced during ROOSTERGNN Academy’s first Travel Journalism & Photography Internship Seminar in Havana and Trinidad, Cuba, under the editorial direction of RGNN Expert and Mentor Benjamin Jones. Follow #RGNNCuba for all of our Cuba coverage.

EEach meal started off with a salad, no matter the location. Every plate identical, consisting of red tomatoes, white cabbage, and green lettuce with cucumbers, a typically colorful salad set-up for a not-so typically colorful town, served with every meal in Trinidad, Cuba.

Eager to learn more about the food culture in Trinidad during a one-week stay, I was guided to the home of Edunio Peña and Rosalia Catalan, famous in their family for being the finest cooks, and as well as with their foreign guests. The retired couple rents out one room in their home and is open to anyone who wants to experience the true culture of living with Cubans.

“They are the best cooks in the entire family,” said Catherin Peterssen, my local guide and the couple’s niece.

The couple explained to me that the most commonly cooked and traditional meal they prepare in their home is “cerdo” (pork). Intrigued by the way it is cooked since all cultures prepare their food differently, I was surprised to hear of all the distinctive items they throw into the pot.

“We cook and use the entire pig, and prepare it in two different ways, baked in the oven or roasted on a spit over a fire,” said Peña. The pig is seasoned with lemon pepper, but not much more.

The conventional Cuban side dish, rice, is also prepared commonly in two ways. White rice is simply cooked with nothing but water and a little bit of salt, and the other more customary cooked rice is called “arroz congris” or also commonly known as “moros y cristianos” which is rice with black or red beans.

“The first step is to soften the beans,” said Catalan. This process itself takes 30 minutes. Other ingredients added to enhance the flavor of the beans include malanga (a starchy root), calabaza (pumpkin), a teaspoon of oil, and vinegar.

“It is most important to add pork skins for flavor,” said Peña, followed by a little bit of sofrito (tomato sauce), onion, a splash of cumin, garlic, and peppers.

Beer or wine are always served with the meal. The wine is often homemade since commercially produced Cuban wine is rare.

“There are a variety of ways to produce wine,” Catalan said. Made from all different kinds of fruits such as grapes, bananas, pineapple, or anything that can be found in the house at the time. After sugar is added to the fruit, the concoction must sit for 40 days before it is ready to drink.

Traditional desserts include bread pudding or “arroz con leche” (rice pudding), a sweet ending to a full meal. The bread pudding is prepared as a casserole in a double boiler and cooked for 30 minutes. The first step is to add a layer of melted sugar along the bottom of the pan.

“When you put a knife inside and the knife comes out clean it’s done and you first let it cool down then turn the casserole over on a plate so that the caramel sugar is on the top,” Catalan explained.

For the arroz con leche, it is easily cooked in a few simple steps. The first step is to boil the rice to make it soft before adding evaporated milk and cinnamon for flavor as well as design.

“It is presented like a beauty dish,” Catalan said.

The couple charge 30 CUC (or $30 at $1 to the CUC) per night for a room which includes breakfast. A traditional Cuban breakfast typically includes a fruit plate of sliced pineapple, guava, papaya, oranges, and bananas; bread and butter; eggs any style served with sliced cucumbers, and to drink, chilled natural fruit juices or fresh mountain-grown Cuban coffee. For dinner, they offer a choice of pork, chicken, or fish for 10 CUC and lobster or shrimp for 15 CUC. Beer is 2 CUC.

“People who come visit are always asking to stay longer because they like it a lot,” Catalan said before offering to cook for me one night before leaving Trinidad. 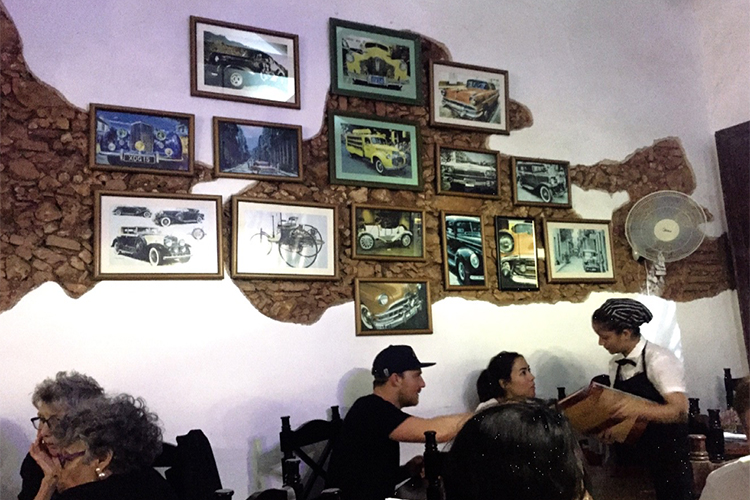 I knew after learning about local food I needed to visit a popular restaurant in town and San Jose was my choice as the long line outside suggested a fine meal was in store for our group.

But the wait wasn’t too long and after 15 minutes we were shown to our table in the middle of the four exposed brick walls decorated with pictures of the classic American cars so common in Cuba.

The menu had a decent variety with dishes that were new to me. I decided to start with shrimp and cheese-stuffed plantains.

Even though a bit dry, they tasted wonderful, a verdict shared by my friends who had joined me for dinner. This got me ready for the main dish: Shrimp and lobster skewers with white rice and arroz congris.

The skewers arrived with the rice along with a small side salad consisting of a leaf of cilantro, lime, and a cucumber cut into heart shapes, with a piece of tomato. Without wasting time I grabbed my fork and forced all of the shrimp, lobster, and peppers off the skewers and mixed them up. Cilantro being a normal part of my diet I was thrilled to be able to cut it up into my white rice to give it the right taste. 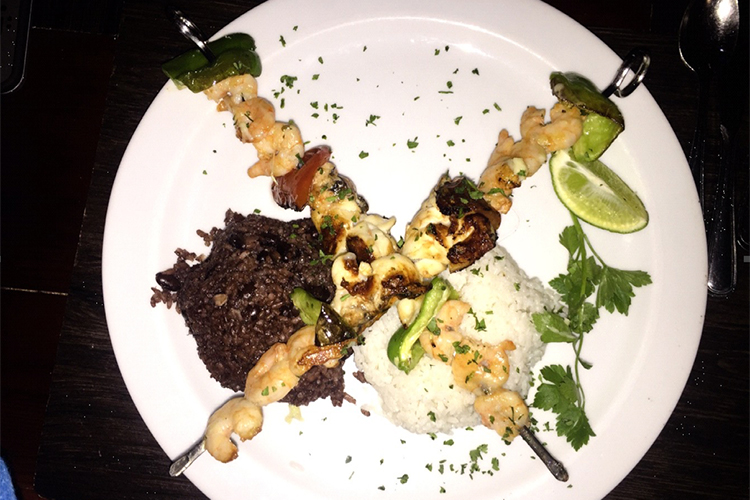 Shrimp and lobster skewers served with rice, a must have dish at San Jose | Jessalyn Castro

I squeezed the lime over my entire plate, mouth watering. Believing you can’t go too wrong with shrimp, I went for that first. The juices that seeped out of the shrimp were so good that I knew that the lobster could only be better. Silence fell among my table, as we all dug into our main courses. Then I went for the lobster.

Completely satisfied with my choice, I continued to dig in. The beans in the arroz congris were soft enough to go along perfectly with the rice. As a person who likes to eat in proportions, mixing almost everything on my plate into one bite, everything beautifully complemented each other.

After I cleared my plate I was quite full but ready for the next round, dessert. I decided flan with coconut was the sweet ending I needed. As it arrived I recognized another gorgeously designed plate, but wasn’t too impressed that I basically had just ordered flan with shredded coconut on top. Succulent nonetheless, I enjoyed the few bites I took. 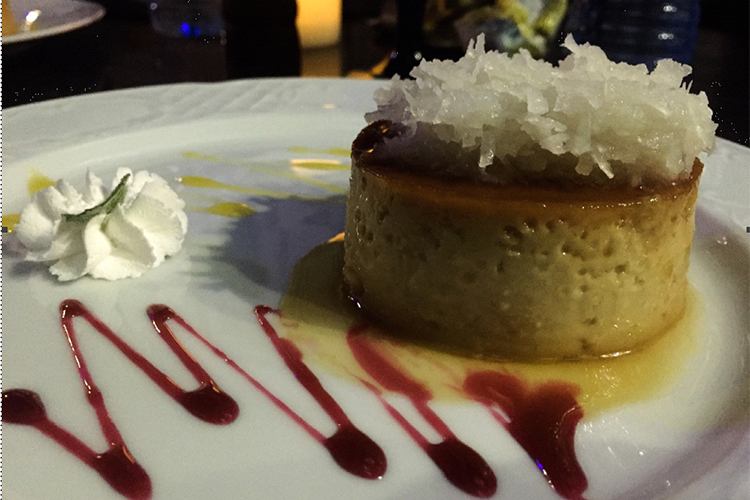 When the bill was presented I only had to pay 24 CUC, service charge included. I was glad I didn’t pass up the opportunity to purchase fish at a much lower price than at home.

I was sad to leave the quaint city but glad to have gotten a taste of tradition. For future travelers I recommend not being afraid to dive into the local culture. The vibrant town with its beautiful colors is the opening door to the delightful diet behind them.