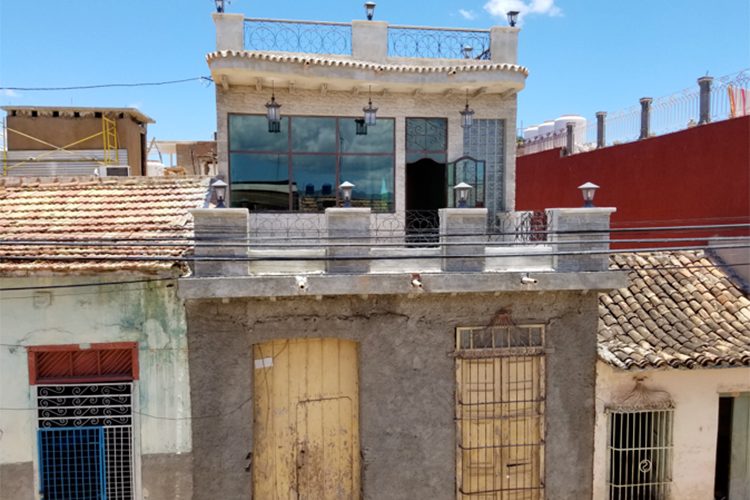 A City Trapped in the Past: Architecture in Trinidad, Cuba

Scot SwanAugust 4, 2017
CubaTravel0 Comments 1
The following article is published in the #RGNNCuba Magazine: Vol. II, Summer 2017, produced during ROOSTERGNN Academy’s Travel Journalism & Photography Internship Seminar in Havana and Trinidad, Cuba, under the editorial direction of RGNN Expert and Mentor Benjamin Jones. Follow #RGNNCuba for all of our Cuba coverage.

As I walked down the long bustling cobblestone streets of the southern colonial Cuban town of Trinidad, I could not help but notice the fascinating design and colors of many of the buildings. All of them seemed to seamlessly blend together despite the contrasting bright vivid colors. But as I began to study them I noticed their distinct differences. The homes and restaurants I had seen in Cuba so far had this older style of architecture but this whole town seems to be encapsulated in this Spanish colonial time period.

After four days of being in Trinidad I still find myself gazing at the arcs and curves that create the Spanish colonial design that makes the city so visually stimulating. Once I got used to navigating the town and learning how to dodge the horse–drawn carriages and classic American cars that keep this city in another era I decided to learn a little more about why this place has kept its 18th and 19th century panache for so long. 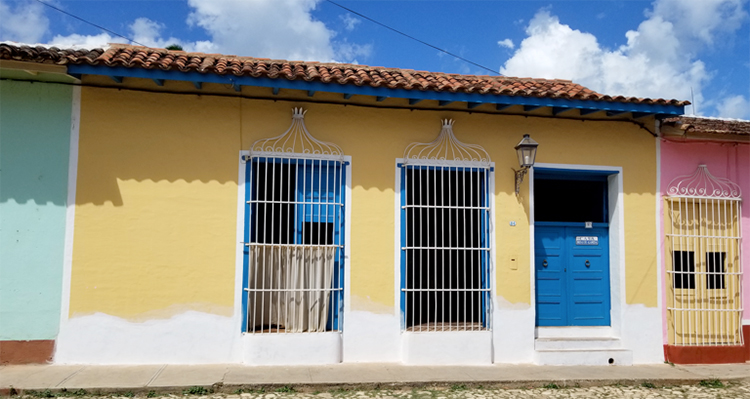 Rectangular doorways that marked the turn of the 19th century in Trinidad architecture. |
Scot Swan

Many of the buildings around town can be distinctly told apart by time period but unless you know what to look for it might be hard to spot. Tourist guide Yosleivy González has lived in Trinidad her whole life and was able to show me around town, describing some of her favorite structures and how to differentiate between the two. 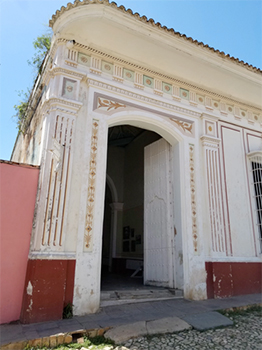 Large open doors with tall standing
arcs to support them were the style
of 18th century homes in Trinidad. | Scot Swan

“Buildings from the 18th century have curved arcs on the doorways whereas the 19th century buildings all have blocked or rectangular doorways,” she said. The houses and storefronts that have been converted all mix and match this feature, sometimes with houses right next to door to each other having features from different time periods.

Yosleivy went on to tell me, “Wooden doors were a 18th century design but many of the newer houses adopted this style because they preferred it to the large metal cages that became more prominent later on. Some houses even have both of these making it a more unique style.” Yosleivy really liked being in Trinidad, she knew a lot about the town and many of the people in it.

As Yosleivy and I walked around looking at the different buildings she began to tell me of her appreciation for the town she grew up in and how every time she left she felt a strong urge just to walk around and gaze at the curves and colors that brought the street to life upon returning. We discussed the different homes that we saw on our walk around the city and why they stood out to us. 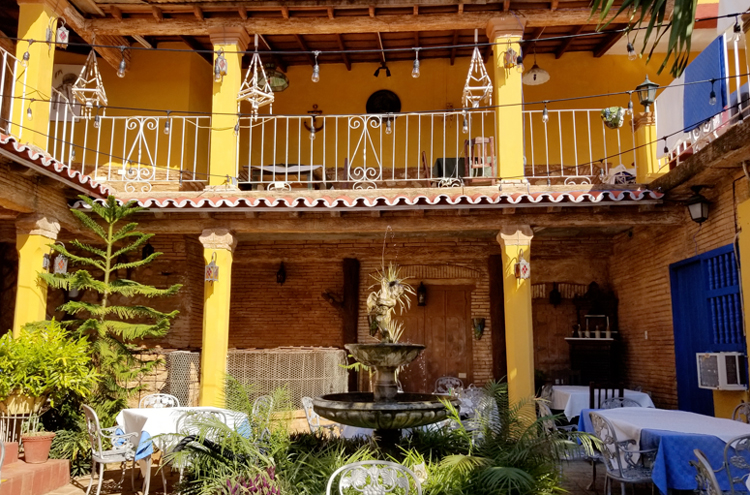 Yosleivy showed me one home she had always liked in particular, The Paladar that is perhaps the most expensive places, in terms of design in the town. The interior walls were lined with delicate hand-painted designs faded by their many years of existence. Yosleivy told me that because it had a garage for horse drawn carriages it made the value of the home much higher, which was very important at the time. Although it was converted into a restaurant it kept much of its original features and living room furnishings maintaining some of its lavish environment inside keeping its former glory intact.

I was introduced to Orbien Licor, a local architect turned jeweler who explained a great deal about why the town never moved forward with updates or architectural changes to bring the city into a more modern time. 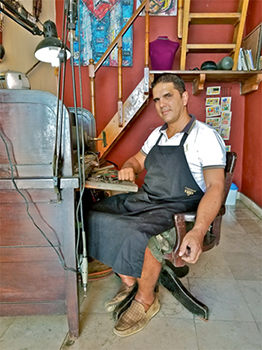 Orbien Licor at his workshop in central Trinidad where he spends hours a day perfecting his craft. | Scot Swan

“The revolution had a large impact on our economy and we were not in a place to be making any changes at the time. Now our government is very protective of the town and its history, to change the architecture would be to change the town itself,” he explained. “I prefer the buildings here as everything is so interesting to look at.”

Licor studied architecture at university but after graduating found it hard to find any work he was passionate about because of the inability to make any drastic change to the city. He has managed to still keep his passion for design alive through his jewelry craftsmanship.

Much of the materials used to craft these beautiful homes and palaces were brought over in 1959 from Russia. This also attributes as to why much of the city design has not progressed, because after the revolution occurred they did not have the infrastructure to update this, and after awhile it became a part of the town and updating its historical nature would be difficult.

The city was built around itself; expanding outwards making it very compact in design, allowing for more room to grow. While other places have developed and made more modern changes in their city planning, Trinidad has remained in its past state making it a much more interesting travel destination given its unique style that keeps it trapped in a Spanish colonial time.

The buildings here are truly a work of art and one could spend days on end aimlessly wandering around studying the pristine craftsmanship that lined the streets. The rich history that encompasses the architecture of the city is enough to fascinate anyone interested in Cuban history or architectural design.