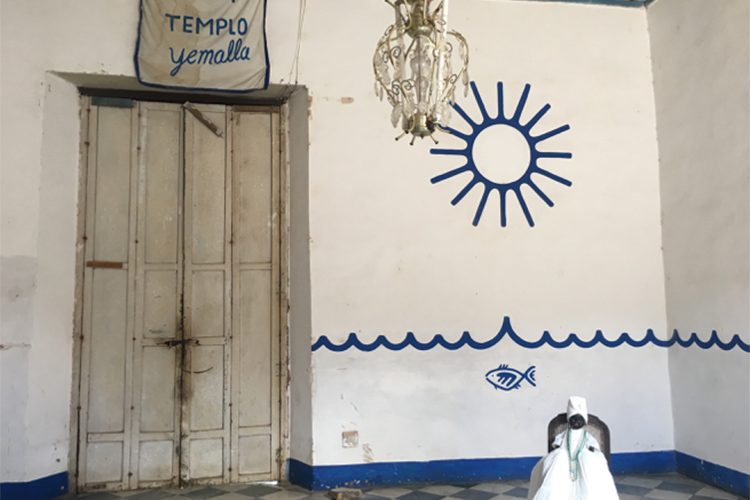 Navy blue waves, fish, and phases of the moon adorn the walls of the front room of the Casa Templo de Santería Yemayá. The back door is typically ajar, leading to the altar and the santeros’ living quarters. | Laura Zornosa

A “Young” Religion Surges in a Cuban Colonial Town: Santería in Trinidad

Laura ZornosaAugust 4, 2017
CubaTravel0 Comments 0
The following article is published in the #RGNNCuba Magazine: Vol. II, Summer 2017, produced during ROOSTERGNN Academy’s Travel Journalism & Photography Internship Seminar in Havana and Trinidad, Cuba, under the editorial direction of RGNN Expert and Mentor Benjamin Jones. Follow #RGNNCuba for all of our Cuba coverage.

Few things stay the same in Cuba from Havana to the smaller, more colonial Trinidad: the pastels get brighter, the smell of garbage fades, the streets turn to cobblestone. Around every corner, however, locals dressed head to toe in white – from umbrella to sunglasses to hat to shirt to pants to shoes – walk the streets of both cities.

These are the “yavu,” or the practitioners of the Afro-Cuban religion Santería who are calling on their saints for extra help through a troublesome situation. Santería pervades the small, peaceful city brimming with tourists, and it seems to be spreading.

Santería priest, or santero, Israel Bravo Vega lives and works at the Casa Templo de Santería Yemayá. The religion, he said, runs in the veins of its practitioners. “In Cuba, the races were mixed and the Creole race was born – that is, the mix of African and Spanish,” he said. “The races were mixed; the religion was mixed. That’s why [we have] our form of thinking, our form of acting and that which is maintained orally, like a legacy.”

The customs of Santería live on orally, but through ritual as well. Nearing the pale blue entrance of the Casa Templo yielded a view of a man sprinkling cascarilla, a fine powder made of egg whites, across the threshold to ward off evil. This is one of many rites of the faith, which is relatively young compared to Christianity, Islam and Judaism.

“On arrival to Cuba, [the slaves] couldn’t practice their religion,” Vega said. “So, to be able to maintain their identity through Catholic images, they found and honored their gods in the church, like the god of water, of fire, of earth, of air and began a new religion called ‘Yemayá.’”

As a priest of a temple honoring the African orisha, or goddess, Yemayá, Vega prefers this name for his branch of the religion, commonly known as Santero, but it goes by many names. The main faith, Santería breaks down into different sects, including the Santero, Espiritismo, and Paleros practiced in Trinidad.

Santero thrives in its worship spaces: temples known as cabildos. “They are private houses where the domestic slaves maintained their animistic practices hidden from the Catholic church,” Vega said. “They have natural attributes, like skins, snails, rocks and anchors that for them guard and contain the forces and natural energies.”

Ringed by lush mountains, the glistening Caribbean and deep blue marshland, Trinidad keeps nature alive and well. Santería feeds into this with its animistic beliefs and personification of the elements. Each of its four main orishas represent an element, though this takes a back seat in Espiritismo.

This offshoot of Santería focuses on spiritualism and communication beyond the grave, as Espiritismo priestess Danely Valdes Pomares put it. “Everyone has their guardian angel, their protective guides that are the dead,” she said. “Those that are living here are part of the spirits. That which comes into being is a branch of the religions that is divided into Espiritismo.”

Wiry with a puffy ponytail, Pomares was chosen by an older priest to enter into Espiritismo, commune with the spirits, and “throw cards” as something akin to a psychic. She also acts as the madrina, the godmother or spiritual mentor, of a younger woman learning more about the Santería ways.

“The dead come into being from the ancestors of everyone, our ancestors,” Pomares said. Speaking about her mentee, she clarified that “in her case these spirits are those that protect her, that protect her house. But one must fill them, one must prepare them, so they can do good inside the home.”

Pomares’ mentee runs a homestay where visiting tourists pass by her family’s Santería shrine every day on their way out the door. The size and shape of a doghouse, the offerings it contains – bottles of rum, sodas, chicken feet — nourish the spirits and the orishas (a term used interchangeably with “saints”) to better help the family. 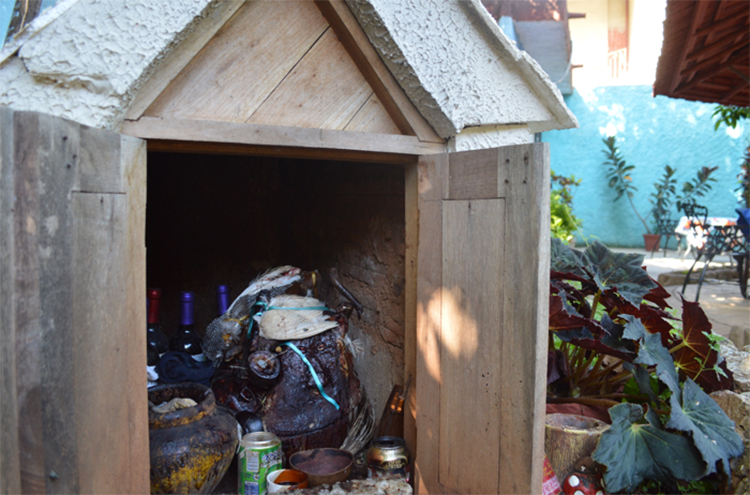 This Santería shrine in the backyard of the hostel features prominently in the open terrace connecting its bright rooms. | Laura Zornosa

“The saint gives them material and spiritual stability,” Pomares said. “This religion is very humble; it doesn’t look for money. We (the people) are those that modify the prices. The saint doesn’t ask.”

To better conceal their beloved native religion from the Catholic Spaniards, the African slaves of old syncretized their gods and goddesses – their orishas, Yemayá among them, with the Catholic saints. Yemayá, goddess of the sea, became la Virgen del Regla. Eleggua, mischievous god of beginnings and endings, became San Antonio. The people of Cuba became happier, with more to sustain them. 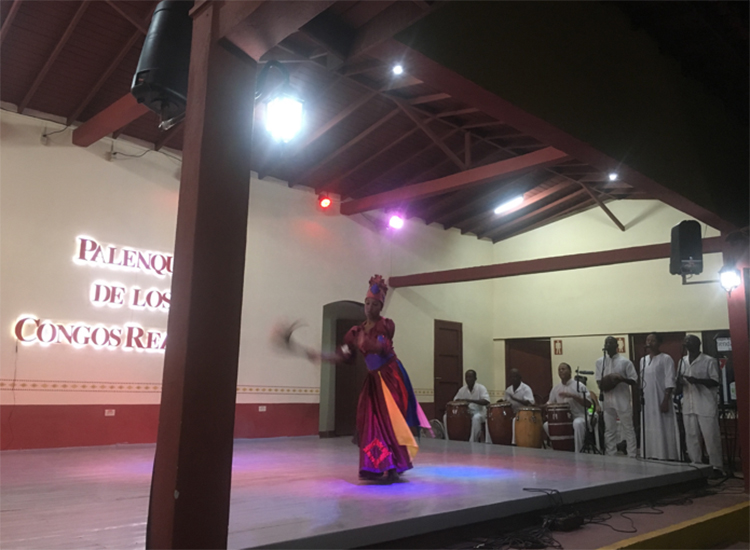 As a teacher, a translator, and a guide from Trinidad, Yosleivy Abrahantes Gonzalez doesn’t practice Santería, but observes its impact on her friends and neighbors. “In Cuba, it [is] very useful… It’s like [the people] work to live that day,” she said. “They have exactly the money that they need each day. They believe in the orishas and all of this, and they think that they are safer.”

This fused faith offers a sense of security, a place to turn with troubles and with wishes. Its sacred African Yoruba language, pulsing drumbeat and rich history cement its place in the culture of Cuba, and its place in the heart of Trinidad.