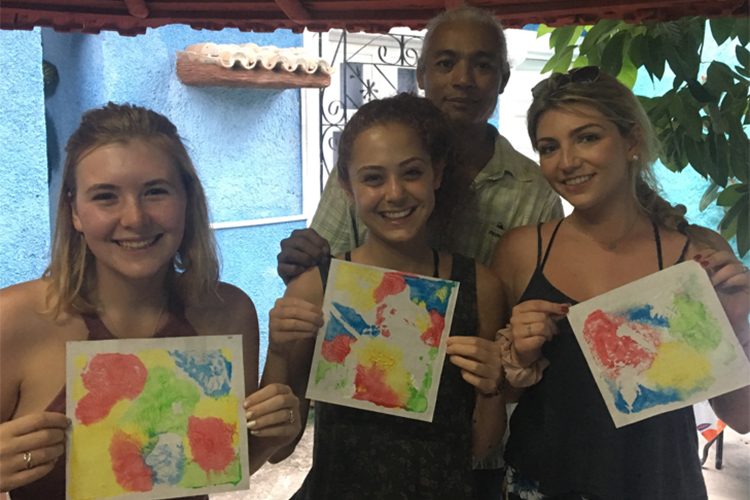 The happy class with their completed work and Garcia. | Jordan Hart

Jordan HartAugust 6, 2017
CubaTravel0 Comments 0
The following article is published in the #RGNNCuba Magazine: Vol. II, Summer 2017, produced during ROOSTERGNN Academy’s Travel Journalism & Photography Internship Seminar in Havana and Trinidad, Cuba, under the editorial direction of RGNN Expert and Mentor Benjamin Jones. Follow #RGNNCuba for all of our Cuba coverage.

Trinidad offers no shortage of activities for tourists to dabble in during their stay in the historic southern Cuban city, but after one too many sunburns at the beach and too long in the heat, taking a painting class can be the best way to capture a piece of paradise.

Casas particulares, or bed and breakfast housing for tourists, know exactly what visitors are looking for when they come to stay and will frequently be able to arrange services to come directly to the casa for their guests. My friends and I were able to sit in our casa’s garden while we learned to paint as multi-colored lizards darted through the lush greenery around us. 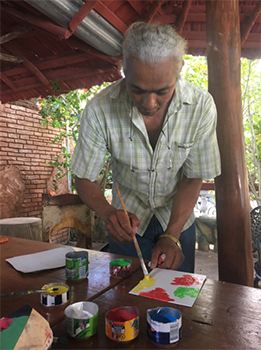 Garcia demonstrating the technique, complete with the soda can paint holders. | Jordan Hart

For my painting class, the instructor, Eusebio Garcia, who has been painting for 20 years, came to my casa with all the supplies needed for the class. He teaches not only tourists, but locals as well. While he practices many types of art, he decided to teach us monotipia, or monotype, which is a technique used to make prints.

Garcia started by laying out our materials, including brushes, rags and paint tubes, along with a bottle filled with a type of oil. He allowed the members of the class to mix the paints, giving us each a cut-up soda can and a brush with the pigment and some oil. While we mixed until the paint reached a lotion-like consistency, he began to cut up thick white cards and white paper, making the cards smaller than the paper.

Garcia only spoke Spanish, but it was easy enough to follow along with the lesson because he started by doing a demonstration of the process. You begin by placing the colors randomly along the white card in any way you like. Then you add an element of texture, which can be anything; for our class, he just went and picked some leaves off the nearby trees in the casa garden. You add the element of texture to the piece, and then place the paper over everything, pressing firmly down while making sure not to smear. What is left on the paper is your new, unique print. From there, after waiting a day or so, you can go in with a pen and create designs to make sense of your colorful image. 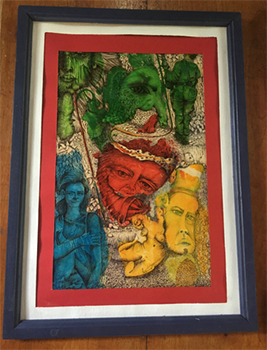 Monotype is a favorite of Garcia’s because “the technique is very open.” Every image will be unique, and it is up to the artists to make sense out of the chaos. He is drawn to creating faces and bodies out of the shapes, to better show the diversity in life and humanity.

He showed us some of his finished work to demonstrate to us what we could do with our images to complete them, which we could do on our own time a day after the lesson. He emphasized the importance of keeping the edge clean, as the card is smaller than the paper the image will be transferred to.

While we worked, Garcia told us a little of what it is like in Cuba to be an artist. He is a part of the Fundo de Bienes Culturales, which is a group of government-approved artists. These artists go to the government’s art school, complete the program, and only then can they access state shops for art supplies and be featured in the government-controlled galleries.

Garcia said that he gets all his materials from these state shops, which keep a record of all registered artists. Without access to those stores, it is very difficult for artists to get materials, and even harder for them to be featured in a gallery. 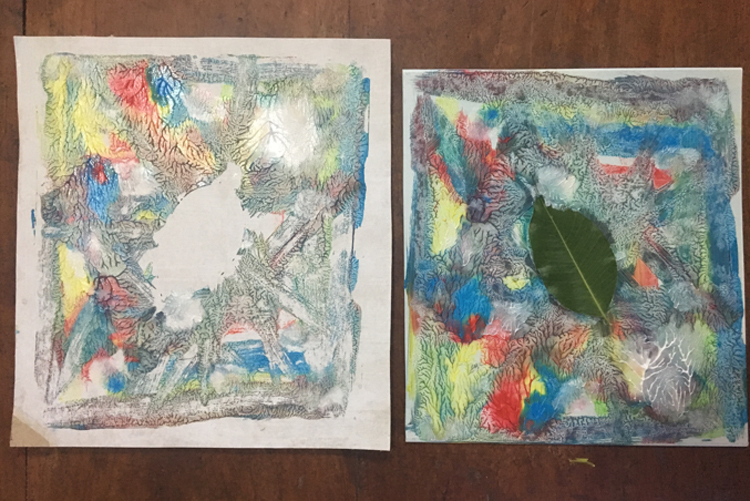 An example of one student’s image and print, including the leaf for texture. | Jordan Hart

La Fabrica de Arte in Havana is an exception. It is a lively gallery with multiple bars and pounding music where artists who are not registered with the government can have a chance to display their work.

Cuban art is distinct not only in how the government is involved, but also in the colors the artists use. Like most islanders, Cubans favor tropical colors: pinks, oranges, light blues, and yellows. Trinidad in particular is known for a very specific type of yellow simply referred to as Trinidad Yellow. Trinidad is a very old, colonial city and the color, like the city, has significance. “The dirt under the surface was a yellow color when the Spanish arrived,” Garcia explained. When the colonists went to construct their houses, they mixed the soil with other materials to build them and the soil gave the buildings a yellow color. There are also claims that Trinidad Yellow became so popular because paint of that color was used to show wealth, intended to resemble gold.

The class was only five CUC per person, which is around $5, and runs between two to three hours long. Each student got to walk away with a special souvenir from the lesson, as well as a cultural education about the relationship between artistic expression and regulation in Cuba. For less than the cost of a Starbucks run, anyone visiting Trinidad should get a taste of Cuba by painting in paradise.