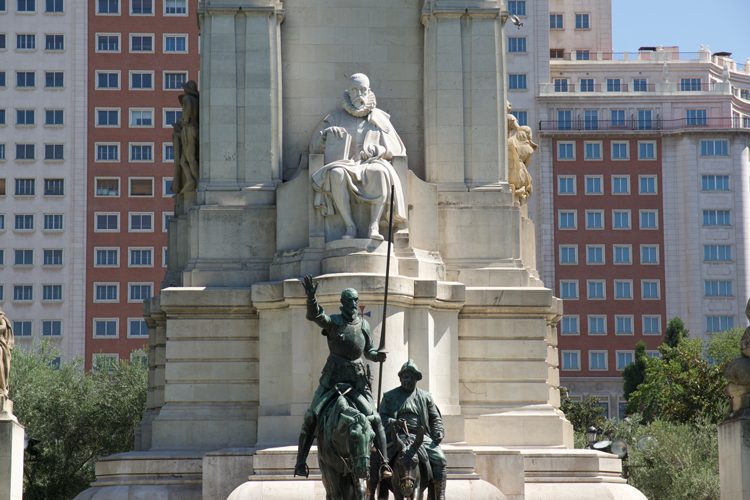 Marcus NavarroSeptember 3, 2017
MADbudget: a local's guide to Madrid0 Comments 0
The following article is published in the #RGNNMadrid Magazine: Vol. III, Summer 2017, produced during ROOSTERGNN Academy’s Travel Journalism & Photography Internship Seminar in Madrid, Spain, under the editorial direction of RGNN Expert and Mentor Natalia Martín Cantero. Follow #RGNNMadrid for all of our Madrid coverage.

The city of Madrid captivates millions of visitors each year.  Whether it’s fútbol fans from all around the world gathering to watch Real Madrid, or foodies experiencing tapas and tinto de verano, or maybe bookworms paying homage to Miguel de Cervantes.  The city attracts so many because of its diverse culture and activities.  The city is also packed with beautiful monuments. It’s impossible to walk around without gazing at a stunning fountain or an elegant stone statue of a famous historical figure.  Any visitors of the Spanish capital must see the beauty that the city has to offer. 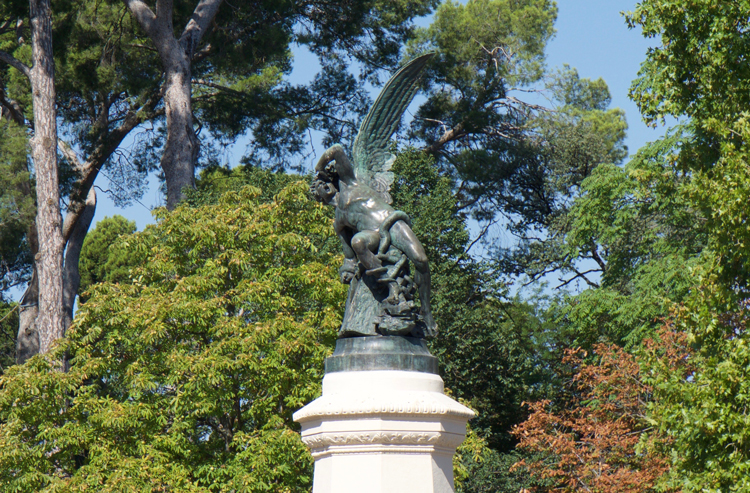 El Retiro Park is a hotspot for tourists and locals alike.  You can rent a paddle boat or join some Madrileños in their morning jog or bike ride.  In the southern part of the park lies the Fountain of the Fallen Angel, likely the most dramatic looking monument on this list.  The base consists of eight demonic figures, each with lizards or fish under its grasp.  Above stands the 2.65-meter statue of the naked angel falling on his back, with serpents pulling at his limbs.  The bronze sculpture was created in 1877 by Ricardo Bellver, which won the Medal of First Class of the National Exhibition of Fine Arts according to Rutas con Historia.  However, it was not originally well received as the public was not happy with its Satanical context.  It has also spent time in the National Museum, but its current home is El Retiro Park.  The fountain is located 666 meters above ground level, a probable coincidence, yet interesting considering the context of the sculptures. 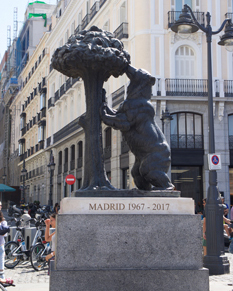 Puerta del Sol attracts many tourists with its many shops and cafes; and Plaza Mayor and the popular chocolate shop, San Ginés, are just a short walk away. On the eastern side of Puerta del Sol, lives the Statue of the Bear and the Strawberry Tree.  It was designed by Antonio Navarro Santafé in 1967, inspired by Madrid’s coat of arms.  The 20 ton, bronze statue displays a brown bear seemingly sniffing or eating from the strawberry tree. It has recently turned 50 years old, but controversy has not escaped this beloved sculpture.  According to El Pais, there has been much debate over the gender of the bear.

The Monument of Christopher Columbus lives just to the west of Plaza de Colón.  According to www.spain.info, the monument commemorating the Italian explorer was made to celebrate the marriage of Alfonso XII and María de las Mercedes.  Spanish traveler, Fernando Selles believes that the monument may be the most important in the city as it celebrates the discovery of America.  Selles added, “[it also celebrates] the Catholic Queen that supported his [Colombus] project, so … it’s the most important in Madrid, I think.”

In the middle of Plaza de España, lies a grand monument commemorating the great Spanish writer, Miguel de Cervantes.  Cervantes lived from 1547 to 1616, writing many important literary works in his lifetime; but none more popular than Don Quixote, tells the story of a strange old man who strives to save the world by being a knight.  According to Mirador Madrid, the monument, which stands at 35 meters, was finished in 1957 and had several designers.  The writer himself is seated, with a copy of Don Quixote in his right hand.  In front of him are the main characters of the novel.  Don Quixote sits on his horse, Rocinante, while Sancho Panza rides his donkey.  Even if you are unfamiliar with the Spanish tale, the large monument is a sight to see. 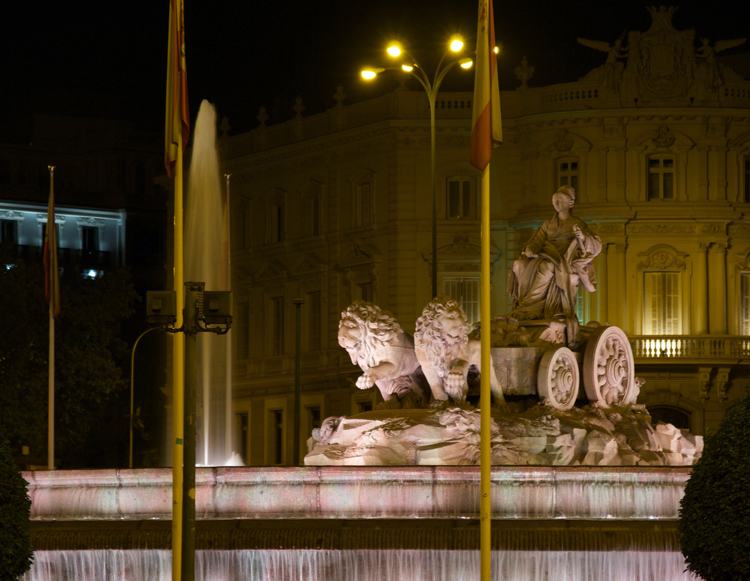 The Fountain of Cibeles at nighttime, with the Palace of Cibeles in the background | Marcus Navarro

Plaza de Cibeles is the home of the Fountain of Cibeles, in the middle of a large roundabout.  In the background is the large Palacio de Cibeles.  The plaza, the fountain, and the palace all celebrate the Roman Goddess.  According to www.esmadrid.com, the marble sculpture of Cibeles riding her chariot, pulled by two lions, was made in Toledo.  The goddess was sculpted by Francisco Gutiérrez and Roberto Michel made the two lions.  The fountain, as well as the palace in the background, is a beautiful sight at night, with the white marble contrasting with the dark sky.  If you visit Madrid in the Spring, there’s a good chance you will find Real Madrid fans celebrating a trophy win at the fountain.  Local Real Madrid fan, Gonzalo Garzia said “It’s an amazing crowd of people; thousands and thousands celebrating with a lot of alcohol and partying.”

Fuente del Ángel Caído; Located in the southern part of Buen Retiro Park, which is open to the public from 6 AM – midnight (April – September); 6 AM – 10 PM (October – March)

Monumento a Cristóbal Colón; Open to the public at Plaza de Colón, near Metro Serrano.