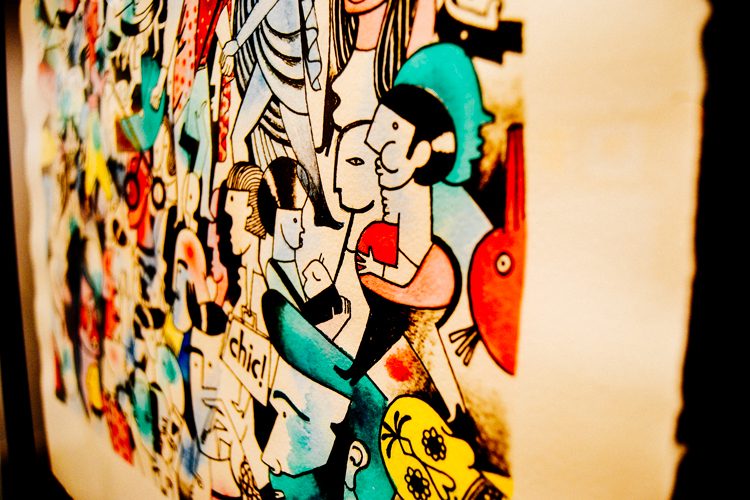 Lela JenkinsSeptember 4, 2017
MADbudget: a local's guide to Madrid0 Comments 0
The following article is published in the #RGNNMadrid Magazine: Vol. III, Summer 2017, produced during ROOSTERGNN Academy’s Travel Journalism & Photography Internship Seminar in Madrid, Spain, under the editorial direction of RGNN Expert and Mentor Natalia Martín Cantero. Follow #RGNNMadrid for all of our Madrid coverage. 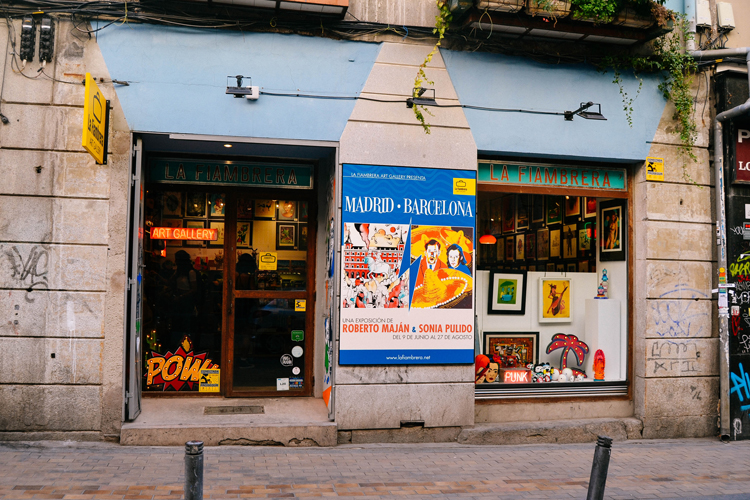 Most millennials aren’t spending their free time in art galleries. When traveling, many choose exploring nightlife and going shopping over stuffy or expensive art venues. However, in the hip neighborhood of Madrid’s Malasaña, one art gallery is breaking that old stereotype: La Fiambrera. Frequented by teens and adults alike, the gallery fits in with the youthful vibe surrounding its streets, at the same time reflecting the history of the city and the culture that surrounds it.

Immediately upon entering La Fiambrera, it seems the neon lights and colors of nightlife have been brought in from the streets and painted on its walls. Luminescent decorations, trinkets like dolls, books and postcards and of course the art itself fills every available space. The people visiting seem as vibrant as the space itself—they are young, thriving and as taken aback with the gallery as myself. 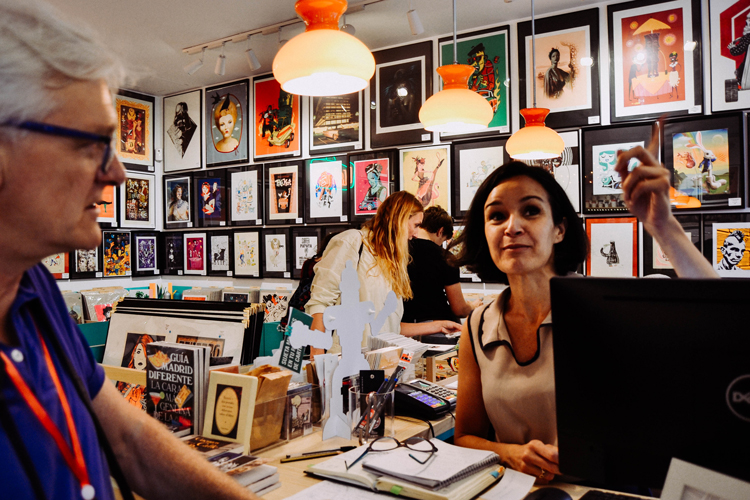 Shopkeeper Ruth Lopez Diéguez explains the meaning behind the metaphor in La Fiambrera’s name, which means “The Lunchbox” in English | Lela Jenkins

“Our art gallery is a container in which to find food for the heart.” Employee Ruth Lopez Diéguez

One of—if not the most—eccentric aspects of La Fiambrera is the name itself. “‘Fiambrera’ in English means ‘lunchbox’. The word really relates the gallery and the local patisserie and delicatessen store which it formerly housed,” said Lopez Diéguez, explaining the meaning behind the metaphor. “Our art gallery is a container in which to find food for the heart.” 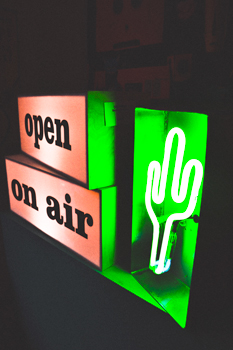 “This place is like a jewel box of a gallery.” Laura Martín, artist from Valencia

Laura Martín, a young artist from Valencia who enjoys poetry and music, also thinks that the gallery is like a special container for art. “This place is like a jewel box of a gallery,” said Martín. “Especially for young people like me, interested in art with a more modern feel. I find each piece inspires and pops in its own unique way I can’t help but love the bright colors many of these artists chose to incorporate.”

The gallery is filled with intriguing teens and young adults similar to Martín, some artists and some not familiar with art at all, but all attracted to the pop of culture the gallery has to offer. Its current exhibition Madrid-Barcelona, which features more than 40 multimedia works, addresses the ever-relevant reality of Spain’s two most popular tourist hotspots. With two artists featured, one from Barcelona (illustrator Sonia Pulido), and the other from Madrid (illustrator Roberto Maján), the exhibition immediately gives rise to a compare and contrast of the two cities, of their highs and of their lows. 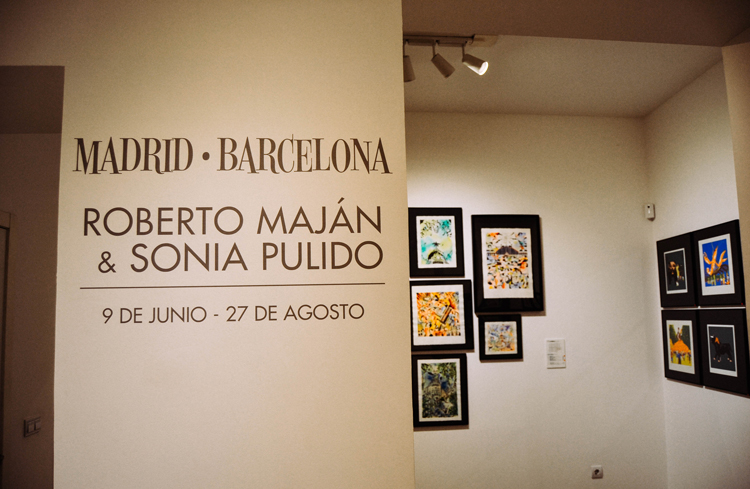 “[The exhibition] is a critic made with humor and affection.” Employee Ruth Lopez Diéguez

“The exhibition is the personal vision that every artist has of the city in which he lives,” said shopkeeper Ruth Lopez Diéguez, who runs the gallery almost daily. “It is a critic made with humor and affection.”

While the exhibition does work to dissipate what is seen by some as a serious rivalry between cities, it also strongly expresses what each artist personally sees as uniquely characterizing their hometowns, from culture lost to tourism in Barcelona to LGBTQ+ pride in Madrid.

“In both works are reflected events and icons typical of Spanish culture and each of the cities, but passed through the filter of each artist,” said Lopez Diéguez. “Both are cosmopolitan cities in which modern things coexist with the oldest traditions. They are different in their physiognomy, but equal in their functioning and their problems.” 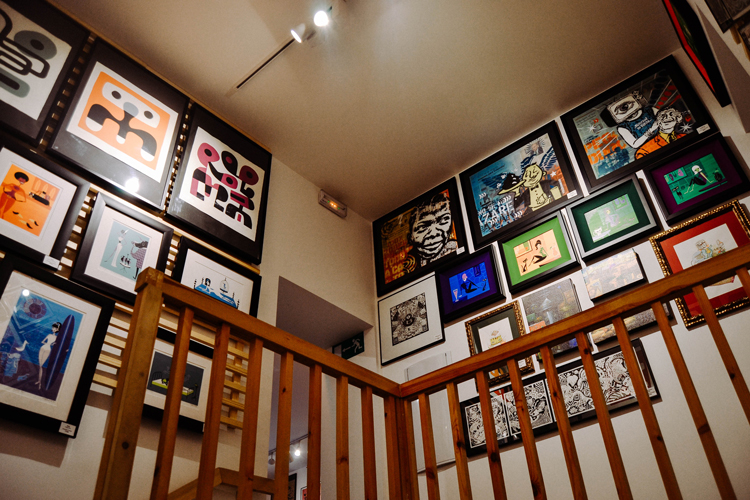 Beyond the exhibition, the gallery features a plethora of artists which even continues in its cool basement gallery. The work downstairs ranges from graffiti-esque to pop culture inspired. One collection of prints was even created by Derek Yaniger, who has worked with popular media such as Marvel Comics and Cartoon Network.

“The artists we work with we have been looking for a long time because we are interested in our gallery showing the current work of creators linked to popular culture, urban culture, pop art, lowbrow [underground art] and more,” said Lopez Diéguez. 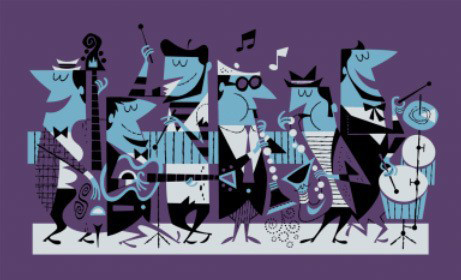 The investment that Lopez Diéguez, all of La Fiambrera and all of its artists put into creating an exhibition that tells a story is reflected and reciprocated in the people it draws. Young people from all over, the next generation of artists, can relate to these historical and cultural stories these artists have expressed because ultimately they are inspired to tell their own. They only have to open the “lunchbox” of art, La Fiambrera, to inspire their heart and be inspired to express it.