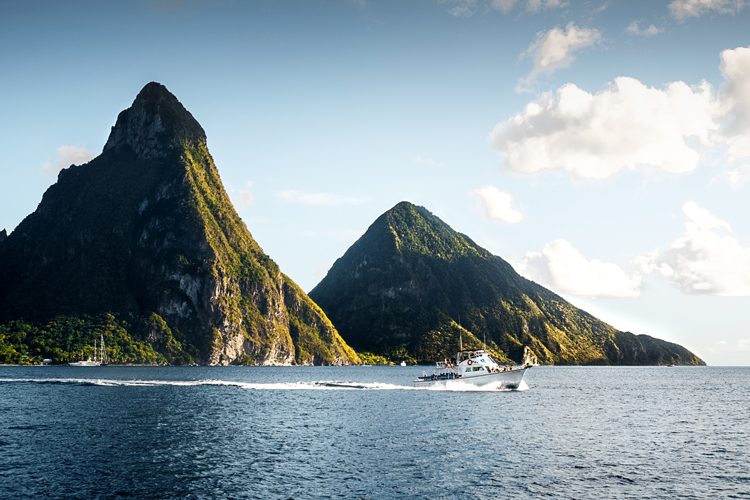 Awash with crystalline blue waters, delicious national dishes, and rich cultural history, the Caribbean archipelago is a treasure chest harbouring some of the world’s most beautiful island nations. Whether it’s a wintry cold spell motivating you to book your next Caribbean adventure, or a craving for a beach-side piña colada, below are 5 islands that will have you scouring SkyScanner for the next flight in. 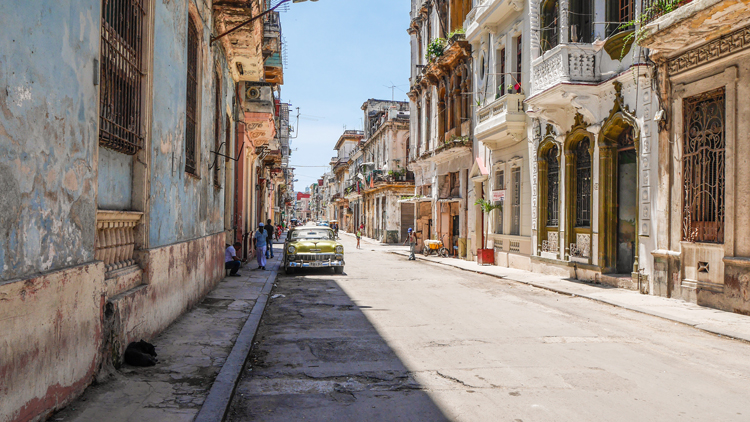 A country that appears frozen in time with its old-style colonial architecture, the Republic of Cuba is famous for its colourful automobiles and world-class cigars. It is the largest and second most populous country in the Caribbean and its notable attractions vary from coast to coast. For lovers of dance, Cuba is known for having popularized the styles of rumba and salsa in the United States and has its own local genre of music and dance called danzón. Havana’s National Ballet School is the largest of its kind in the world, and puts on impressive classical performances that leave viewers dizzy with awe. While Havana has often been hailed as Cuba’s most beautiful city, the city of Trinidad is gaining popularity among young travellers as the spot to be. With beautifully restored buildings, this UNESCO World Heritage Site will transport its visitors back in time. If it’s a taste of the local foods you’re looking for, order a cuban coffee along with a savoury cubano (a ham and cheese sandwich popular among locals). For quick and easy travel, the most entertaining form of transportation in its large cities is the Coco Taxi, a spherical, open-air, banana-yellow scooter you can squeeze into with a few friends. 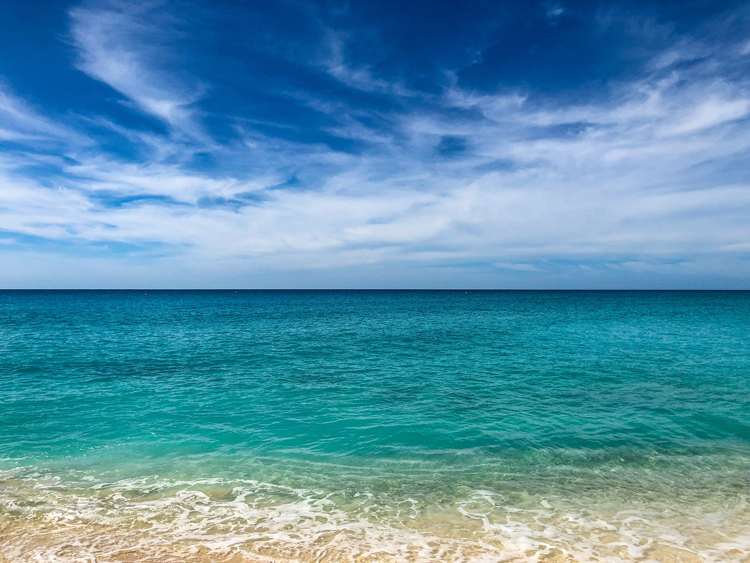 Though one of the hardest-hit Caribbean countries by devastating Hurricane Irma in late 2017, Saint Martin remains one of the most beautiful islands in the Caribbean. A singular island divided between the Kingdom of the Netherlands and the French Republic, its colourful architecture and fine dining and shopping are reflective of its multinational influences. For eager shoppers, the French capital Marigot boasts the latest fashions from France, and fine dining to boot. While not particularly known for their Caribbean cuisine, tourists can find creole-, Jamaican- and West Indian-inspired cuisine at any of the local dives. Activity-wise, the island is a diver’s paradise, with well-protected marine parks that are overflowing with turtles, sharks, lobsters, and rays. Its mountainous terrain is juxtaposed with stunning blue waters and colourful establishments scattered along the landscape. Visitors can charter a boat to the neighbouring island of Anguilla to spend an afternoon on its popular white sand beaches. On the mainland, Saint Martin’s Mullet Bay is one of the island’s nicest getaway spots and is relatively quiet.

3. The Turks and Caicos Islands 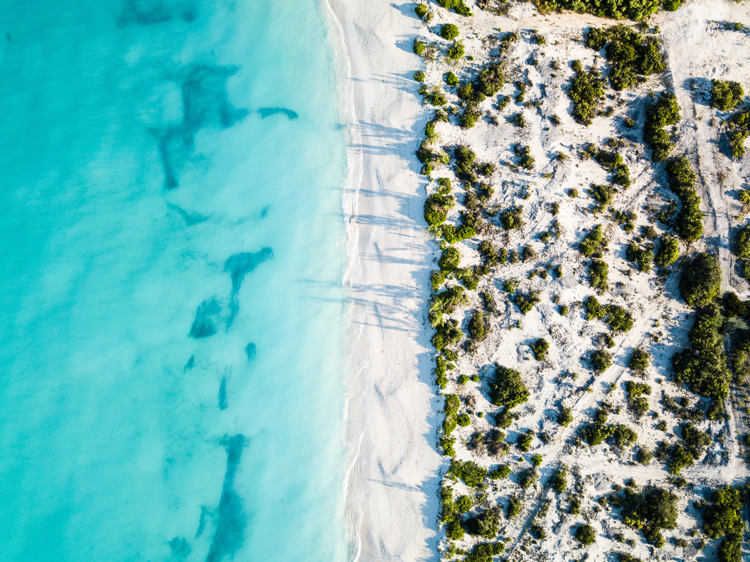 The Turks and Caicos Islands is a multi-island country comprising of 40 islands, islets and cays peppered at the end of the Bahamas chain. Its white sand and aqua-coloured waters have made it a popular destination for celebrities. Visitors can paddle-board, wind- or kite-surf, and snorkel along its world-famous Grace Bay beach on the island of Providenciales. The country is further celebrated for the popular local catch, conch. This marine mollusc is often fried up with plantain and peas and rice in a dish called “cracked conch,” and its shell is carved by local artisans to produce marble-pink wares and sculptures. The Thursday-night fish fry is the perfect place to sample the country’s other popular delicacies, like conch fritters, jerk chicken, oxtail, or saltfish. For divers and adventure-seekers, the Turks and Caicos promises some of the most spectacular diving in the Caribbean archipelago. A 10-minute boat trip offshore of Grand Turk, the capital island, leads divers to “The Wall,” one of Turks and Caicos’ most famous dive sites. From a depth of 20 feet, swimming along the wall allows divers to observe the sudden, 7,000 foot drop into a bottomless abyss that is home to eagle rays, manta-rays, sharks, and turtles. 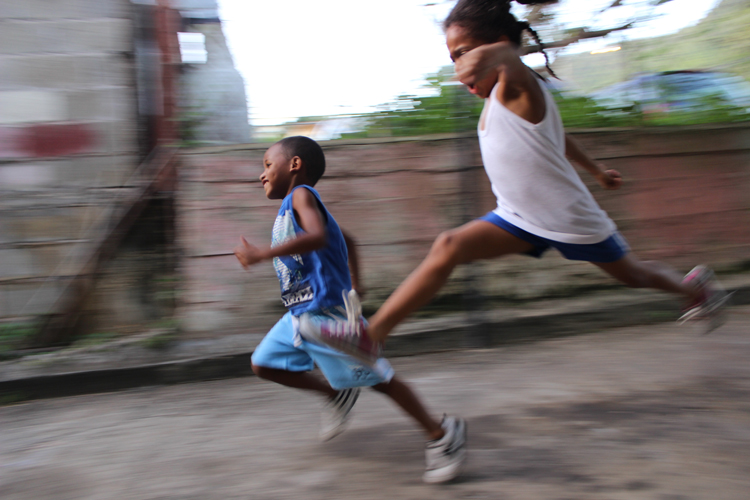 Dubbed “Sweet, Sweet T&T” by its proud locals, the dual-island nation of Trinidad and Tobago is home to some of the Caribbean’s most poppin’ parties and delicious foods. The country’s legendary “Carnival” festival, which takes place in the days before Ash Wednesday, involves various bands of people dressed in elaborate, feathered costumes parading through the streets of its capital, Port-of-Spain. A multicultural melting pot, Trinidad’s culture is the product of African, Indian, European, Syrian, Lebanese, and Chinese influence, through the waves of immigration the country experienced throughout its history. This astounding diversity is reflected in its local dishes. For a truly “Trini” experience, visitors can sample Doubles, a popular local street food made from curried chickpeas and fried flat bread. The cultural influence of Trinidad and Tobago has spread throughout the rest of the Caribbean as part of a heavy diaspora, particular within its popular music, “Soca.” Filled with rich jungle and exotic fruits picked straight from the tree, Trinidad is the ideal destination for gourmand’s, or for those looking to experience a unique culture through their travels. With an economy that is heavily-based on its oil and little investment in tourism, many of its attractions are virtually undisturbed. 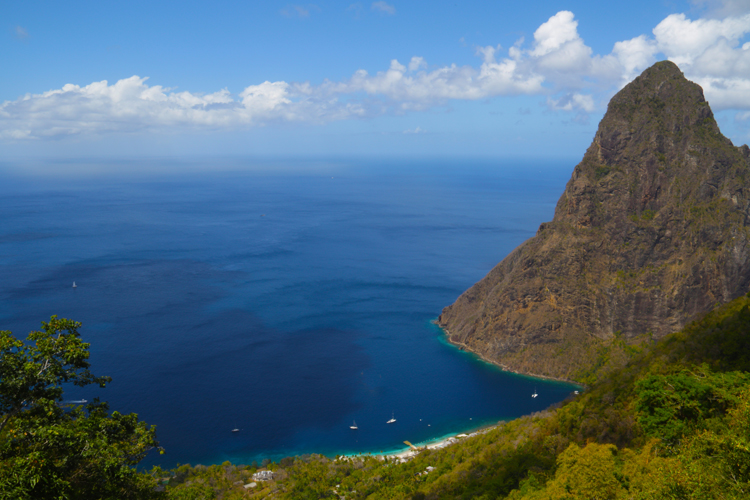 One of the lesser-known Caribbean travel destinations, this sovereign nation has an activity for every type of traveller with its lush forests, pristine beaches, delicious local cuisine, and historical significance. St. Lucia’s iconic, jagged peaks, the Pitons, can be viewed via a leisurely catamaran tour around the avocado-shaped island, or by a steep climb reserved for the brave and the fit. With a healthy, thriving reef, rich underwater biodiversity will delight snorkelers and divers. Offshore, travellers can try their luck with whale watching tours between October and February for a look at the humpback, sperm and pilot whales lurking beneath the surface. Back on land, the island hosts the world’s sole “drive-in volcano.” Visitors of the Sulphur Springs in Soufrière can drive into the crater and walk among the hissing wisps of steam.