What Does AI Mean For Your Children?

In order to understand AI, one must first delve down the rabbit hole of defining human intelligence. While intelligence is defined as “the ability to learn or understand or to deal with new or trying situations” by merriam webster, the average person might say that intelligence simply means the ability to think. From this definition, one might say that human intelligence is that which differentiates us from plants and animals, i.e. our level of consciousness that allows us to think logically and rationally. Now that AI has been introduced into mainstream culture, we are faced with the question: is human intelligence replicable? If so, is human consciousness the golden standard of ability we once thought it was and could it be surpassed?

Artificial Intelligence is “the ability of a digital computer or computer-controlled robot to perform tasks commonly associated with intelligent beings.” AI is being developed to match human ability and surpass human efficiency. Highly skilled intelligent robots are now able to do your job better than you. Although technological advances have been replacing “manpower” for centuries, i.e. computerized switchboards, the printing press, even the cotton gin, in all of these cases, humans are still needed for their unique quality of consciousness. Machines of the future are not only meant to increase production, but decrease the human workforce. 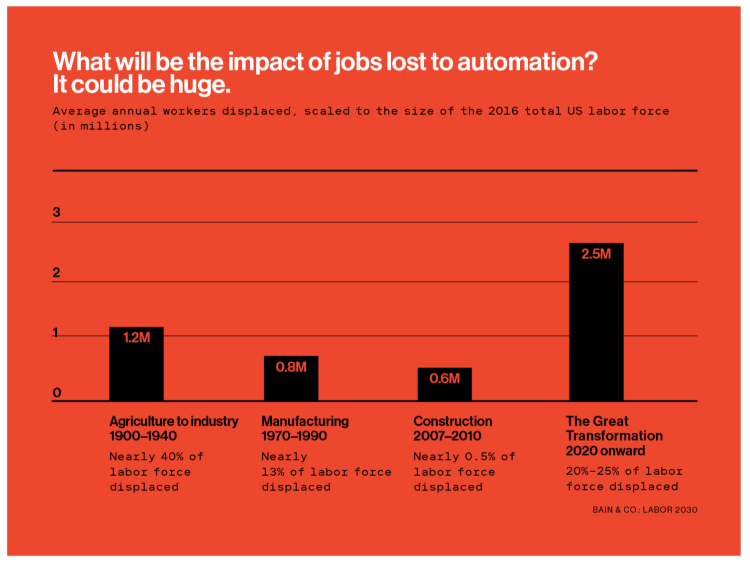 When introducing AI robots into places such as factories, they effectively take the place of the skilled and unskilled laborer. It is obvious why a company would opt for a robot instead of a human, no breaks needed, no safety regulations, and most importantly no wages. This is not a new phenomenon, “In 1900, about 40 percent of US workers were on farms; today fewer than 2 percent are. In 1950, about 24 percent of the jobs were in manufacturing; today around 9 percent are.” The cyclical replacement of manpower for machines also has a history of creating new less grueling, dangerous jobs for human employees. For instance, as switchboard operators lost their jobs to automated dialing devices, jobs were created at telephone companies in sales, advertising and HR. But in the case of AI, the jobs that are being taken over by robots are not necessarily creating the same growth for the skilled laborer.

Research done by MIT scholar Daron Acemoglu his colleagues, concluded that for every one robot, approximately six jobs are lost on the factory floor. Based on data from 1990 to 2007, 670,000 jobs were lost, which would lead to as many as 1.5 million jobs at 2016 levels of robot usage in the US. The average unskilled laborer is classified as an individual who has not completed a high school education or holds a highschool diploma, GED. While unskilled jobs have seen a decline in the past century, skilled labor jobs are now at risk. The skilled labor jobs that are at risk are mostly low skilled labor, i.e. factory or trade jobs. Automated cars will put 3.5 million truck drivers at risk of losing their jobs. Checkout machines may replace 3.4 million retail cashiers. As robots take over unskilled and skilled labor jobs, the market for those without a high school degree is vanishing and for those who only have a high school education or a GED degree is rapidly dwindling. However, this will then lead to an influx of workers obtaining higher education attempting to find high skilled jobs while the job market remains stagnant, possibly putting our future economy at risk.

During a talk at MIT David Rotman addresses the concerns many Americans feel about growing AI influence stating that “58% of people think there should be a limit on how many businesses can be replaced by machines… and 72% are worried about a future where robots and computers can do many jobs.” The average American is threatened by the uncertainty of their world. Where there was once a confidence that a college degree or even a high school diploma would eventually lead to employment, we are now faced with a lack of assurance that there will even be jobs to fill. In the same talk, Daron Acemoglu speaks about the idea of technologies having the ability to reduce wages of certain subgroups of workers. He further states that “the reason for that is precisely because they are displacing, replacing, workers in the tasks that they were performing before.” Acemoglu determines that the biggest issue facing the American workforce is not necessarily the advancement in technology, but technology that is only able to automate tasks and not create huge productivity growth. These “so-so technologies” are displacing workers, “starting with the blue collar and clerical workers… but because these technologies are not so productive, as a result some groups are losing their wages, employment is not growing and labor share is declining.” The only way the workforce can grow, in order to compensate for the jobs lost to AI, is for AI to spike productivity growth. Without said technology, a shrinking job market is inevitable.

If the skills you have can be learned and replicated, a robot could replace you, making that career path devoid of promise. The pursuit to exchange the human workforce for a robotic one will define employment opportunity for the next generation.

AI and the Future of Work