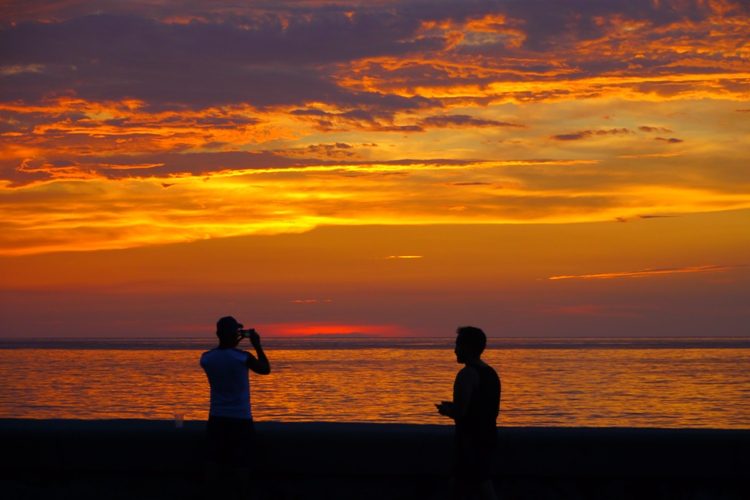 The beautiful sunset over the Malecon | Benedict Steininger

Rum, cigars and sun. Cuba is one of the best countries to visit in the Caribbean for these attractions and more. Its iconic colonial houses are just as important to the history of the island as its rich and tasteful rum made from the sugar cane which has fuelled the island nation’s economy for centuries. So it is no surprise that Cuban cocktails are to be found in bars from Havana to Hanoi. 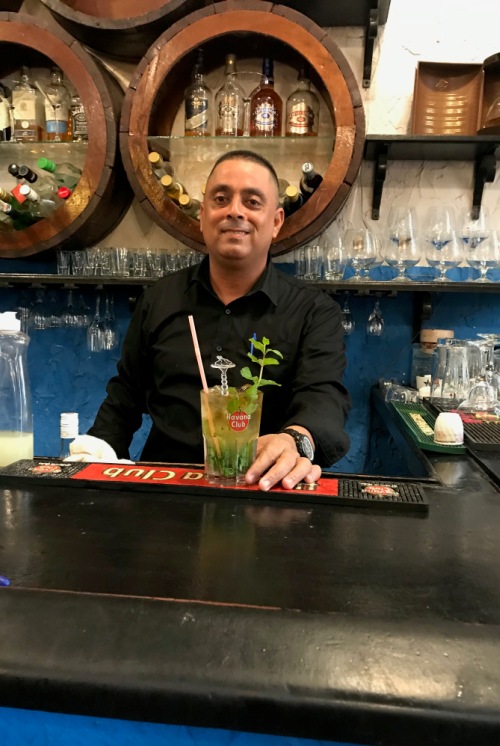 Lime, mint, rum, lemon-lime soda and sugar. The mojito is pretty much a basic but still sincerely important drink in the world of cocktails. On my adventure through Havana´s bars and restaurants, one mojito cocktail stood out from all the others I have tasted in my life, just like the colourful houses that pop in-between the grey and crumbling ruins of the Cuban capital.

The Rum-Rum Bar is definitely hard to find even when using Google maps due to the bad or rather non-existent internet connection in Cuba. But once located, this bar welcomes its customers with a mixture of Spanish and Caribbean charm. Overhead fans that are recycling the hot air provide a long-needed break from the humid conditions in the outside world, so that only the Latin pop music and the black-clad waiters remind me of being in an entirely different place.

When I ordered the house-special mojito I spoke with the barkeep Yunior. He refused to divulge his age but told me that he has been working as a bartender for over 23 years, the last three of which at the “Rum-Rum bar”. Changing the subject, he started talking about the bar´s very own version of the mojito. “A way to make it more interesting”, he said. Instead of using the usual lemon-lime soda and sugar base, Yunior skipped the sugar and went straight to the lime and mint.

Squashing the fragrant green leaves firmly onto the bottom of the broad glass for the mint to release its sensational flavour into the lime, his excitement in preparing this drink for me grew. Describing the exact procedure with a sparkle in his eyes, the barkeeper pulled out his secret ingredient: a tiny can of tonic water.

“Its bitterness and sweetness adds enough flavour to enrich the taste of the lime and mint,” he explained. Once again Yunior started carefully intermixing the mint with the lime juice and the tonic water, trying his hardest not to lose any of the carbon dioxide in the glass. After adding the tonic water, Yunior filled the glass to the top with ice cubes.

Taking two entirely different bottles of rum, Yunior mentioned that the unique thing about this cocktail is that it features both dark and white rum. He was right. Thanks to the combination of tonic water, lime juice, mint and the two different rums this cocktail is in my experience the best mojito to be found in Havana. Despite being fairly strong in the representation of alcohol there was more than enough taste going off from the other ingredients, turning a simple-minded mixed drink into a truly special experience.

The Mango Daiquiri: A Romantic Getaway 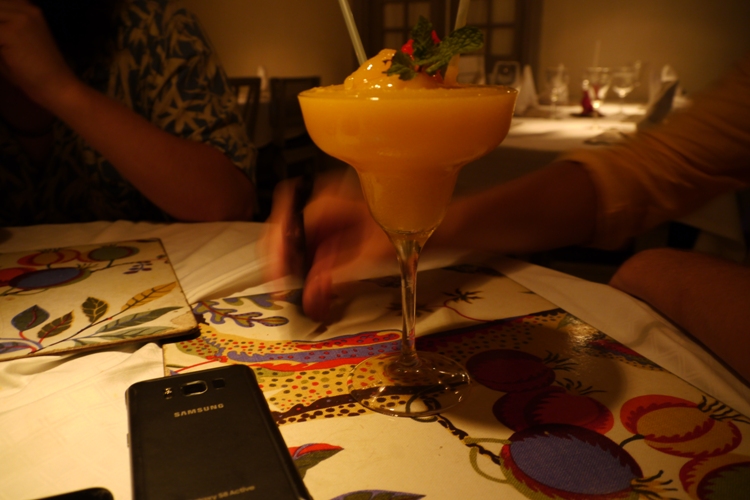 Frozen or original? A question that divides most daiquiri fans around the world. Some prefer the traditional version and some just love it as an ice-cold, alcoholic puree.

I did not know what to expect when entering the little restaurant Las Miglis which can be found just two blocks off the city´s Malecon seaside promenade. Las Miglis is owned by a Swedish music and film producer who found his home in Cuba after a lifetime of travel. The food is a combination of European dishes infused with Cuban spices, which alone is an experience in itself. The interior design however, is a fusion of Cuban´s iconic architecture and a romantic getaway for couples. A long, but thin candle which slowly disappeared over the course of the evening and became a vanished reminder of the beautiful moments that passed that evening. My friend and I were accompanied throughout the whole night by old hit songs which fit perfectly with Havana´s broken-down houses and the ancient American cars.

And this is where I found the best daiquiri in Havana and the finest I’ve tried in many years of trial and error: a frozen mango daiquiri. Being a seasonal offer at Las Miglis, I told myself it would be the best moment to try this version of a cocktail as it was high summer when mangoes are at their peak of flavour and colour. Luckily, I was not disappointed. Filled to the top of the large margarita glass with a refreshing taste and a bright orange colour, this daiquiri made it onto the list of the absolutely choicest three cocktails I ever drank in my life and I’ll certainly be back to sit at that wooden bar and sip true tropical greatness. 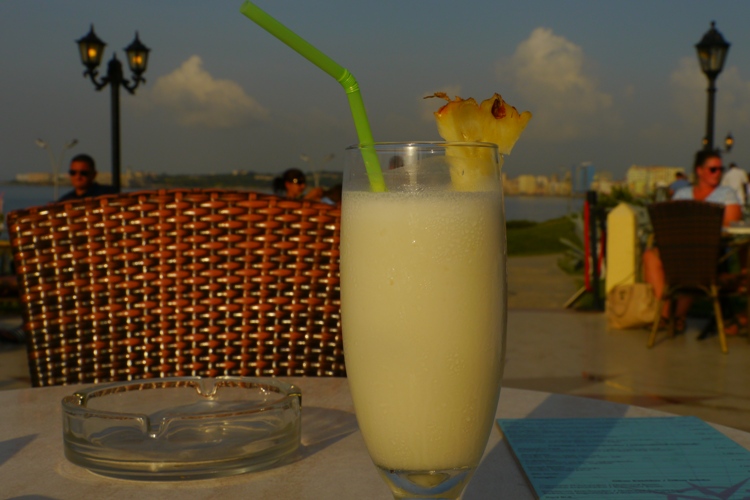 An unforgettable piña colada at the Hotel Nacional | Benedict Steininger

For myself locating a pina colada with a real cocktail taste is hard to find, as the rum tends to ruin the perception of the combination between the pineapple juice and coconut milk. So, when visiting the five-star Hotel Nacional de Cuba, I almost had no hope to  find a pina colada with an actual taste. Nevertheless, I gave it a shot to be convinced for finding the one cocktail that will be able to change my perception of the Cuban classic.

After passing through the 1930´s entrance hall, I stepped outside into the broad and wide-open garden. A band played Cuban music and a peacock guarded the premises by the base of a large tree. Sitting down a few feet in front of the bar, I had a beautiful view not only over the Malecon but out across the Atlantic Ocean and all the way to the horizon.

I asked the waitress for her personal favourite of the rum-based cocktails. “The mojito or the pina colada”, she answered. Having tried the mojito already, I went for the pina colada, hoping to be surprised by the outcome.

And it was a pleasant surprise. Instead of distorting the flavour of the coconut and pineapple, the rum amplified those essences, giving it a sensational experience.

Despite the incredible taste of this cocktail, the atmosphere which is soaked in once taking the first step onto the hotel´s premises give one the chance to enter an era from the days of Hollywood´s Golden Age.

Whether it is a hotel right by the seafront, a place for a romantic getaway or a hidden but beautiful bar in the heart of Cuba´s capital city, all of these places have their own charm and iconic versions of classical cocktails. However, when wanting to improve on the already sensational setting of any of these places, a combination of the amazing sunsets and atmosphere could end up becoming one of the most beautiful of life´s memories. And isn’t that why all of us travel?