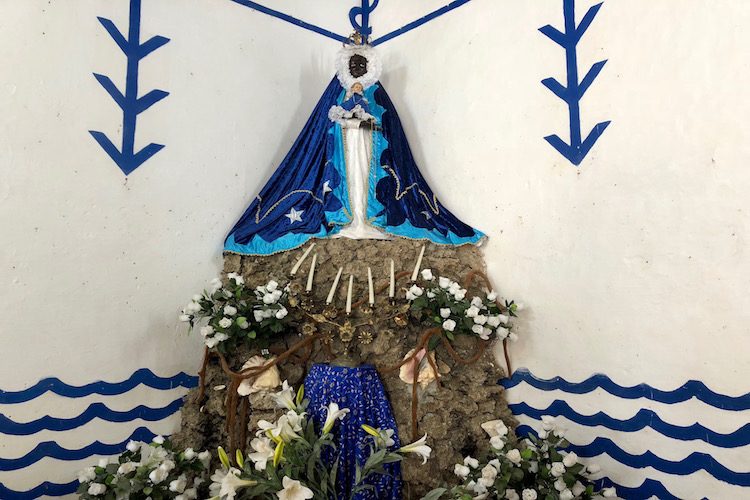 While the southern Cuban city of Trinidad lures in international travelers for its sparkling beaches, pulsating nightlife, historical museums, colorful colonial architecture and the Canchánchara cocktail, there is another attraction that is drawing people to the city.

It’s the chance to take part in an ages-old religious practice based on Afro-Cuban beliefs called Santeria, which blends West African rituals brought over by the slaves with the Roman Catholicism of the colonizing Spaniards.

When the first slaves arrived in 1514, they practiced Yoruba, the essence of which was establishing a connection between humans and spirits. But as slaves they were forced by their Spanish masters to believe in the Catholic religion, so the two beliefs merged and these ‘spirits’ were given names of Catholic saints. 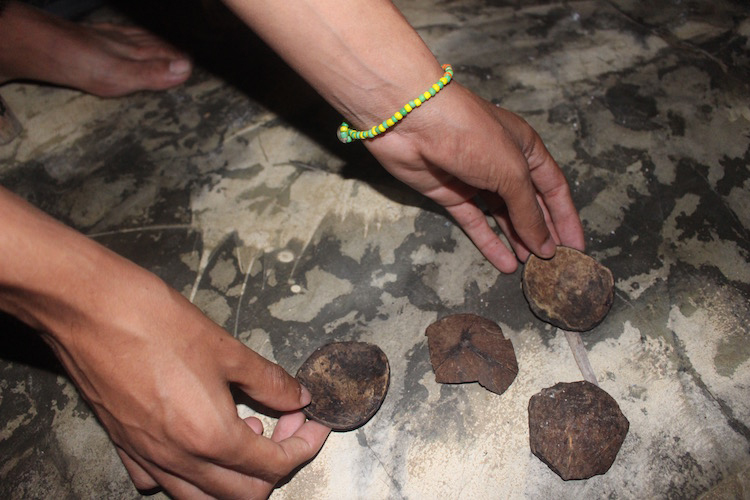 These coconut shells, known as chamalongos, are thrown on the floor as a way of communicating with spirits through yes or no questions– whatever side they land on determines the given answer | Natalie Bauta

As part of their tradition, they had ceremonies and rituals – animal sacrifice, drumming, and falling into a trance to communicate with ancestors and deities. They had dance parties and sang songs in their native African language as a form of protest to feel free. It was also a way of preserving their culture.

That culture still survives among the descendants of the slaves who worked the sugar plantations in the region and which were vital to the colony’s economy.

Now, devotees from other countries and curious travelers come to Trinidad to reconnect to the Afro-Cuban religion’s roots, visit temples in the city dedicated to worshipping the saints, or undergo the process of becoming a Santero or Santera (priest or priestess). It also costs less to become a priest or priestess of Santeria in Cuba.

Meybys Cruz, 23, lives in Miami, Florida and came to Trinidad with her 4-year-old son Daniel to become saints because the initiation process would cost $13,000 in the United States compared to $4,300 in Cuba for both of them.

Her intention to get involved with Santeria was motivated by poor health, she said.

Cruz, whose parents are Cuban, participated in a ceremony that took place in a Casa de Santos, or House of Saints, in a house-temple where she was reborn. She could not look in the mirror, go outside, get sunlight, go to parties, or brush her hair for a week. The ceremony was intended to teach her rituals given her personal circumstances on how to improve and live in better health. After the ceremony, she must wear all white for a year as part of the purification process, or a cleanse, to help get rid of negative energies.

Other times, those interested in the spiritual practice aren’t looking to go through the process of becoming a Santera or Santero, but rather looking to have a limpieza (an energy cleanse). This cleanse could be done using anything from special herbs, water, perfumes, coconuts, shells, or other objects depending on the person and what they need. 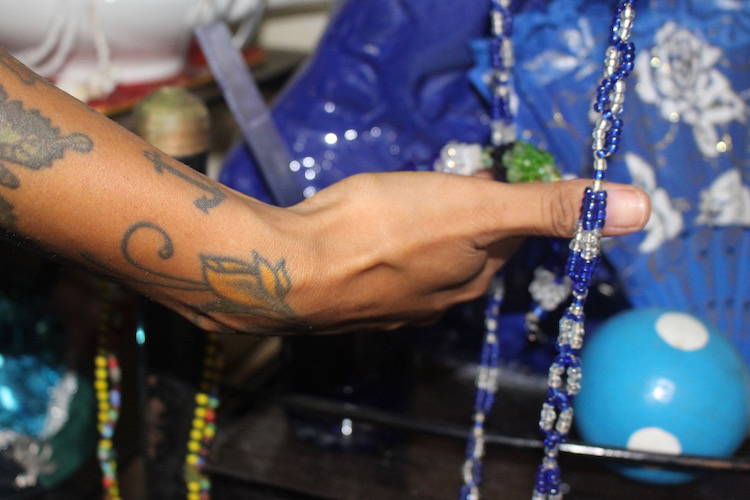 Amaya Gonzalez, 30, holds a blue beaded necklace made in Cuba to honor the Yoruba spirit Yemaya, also known by Virgin of Regla, which was assigned to her after her Santeria initiation process | Natalie Bauta

“In countries like Italy you can’t become a Santera or participate in it, so people come here to become one,” said Amaya Gonzalez, 30, who is visiting Cuba from her home in Italy and became a Santera in Trinidad six years ago.

“I know a lot of people in Italy who came to Cuba to do this,” Gonzalez said.

Torres, 40, has been practicing Santeria since the age of 12. He is what they call a sacerdote religioso (religious priest) of the temple San Lazaro de Trinidad where the structure of the house-temple is made of rocks and was constructed by slaves.

According to Torres, people from all parts of the world visit his temple and he has aijados (godchildren) in France, Italy, the United States and Germany. “All my experiences with tourists have been wonderful,” Torres said. “They either come to learn more about it or to do limpiezas.” 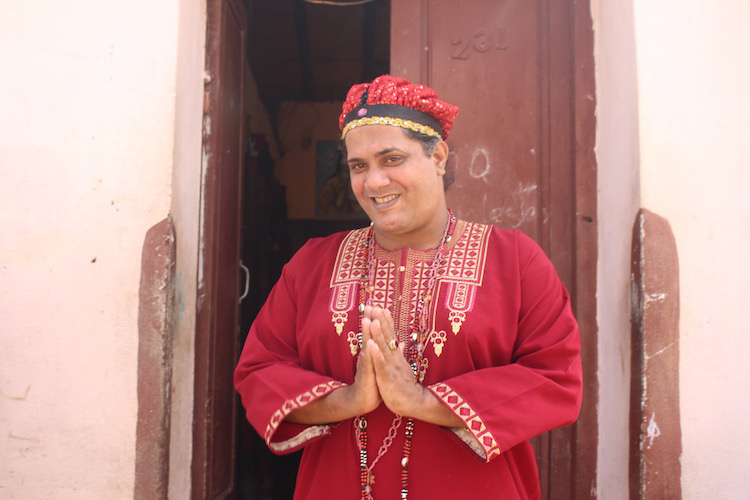 Priest Norlen Torres, 40, stands outside his home which is also a house-temple open to all visitors and locals who want to stop in for a service or to see the altar | Natalie Bauta

Torres said he doesn’t charge anything for his services. People can give donations if they want which will go towards those who are hungry on the streets or to buy candles, flowers or other objects of worship to put on the altar.

The altars at the temples usually have a doll on display wearing clothing such as a long, bright-colored dress and a matching necklace. Each saint is associated with a color, so both the doll’s clothes and necklace will match because of this tradition of wearing the appropriate color of beaded necklace for one’s saint. These dolls represent the Yoruba spirits, referred to as Orishas, who are:

In Catholicism, these same Orishas were given Saint names:

A 36-year-old Santeria priest, Raidel Miranda, who lives in Trinidad, has a hut-like house-temple built with a roof made of guano (dried palm leaves) and the walls made of yagua (dried palm branches). The temple is home to his saint Oshun wearing a long, yellow dress. 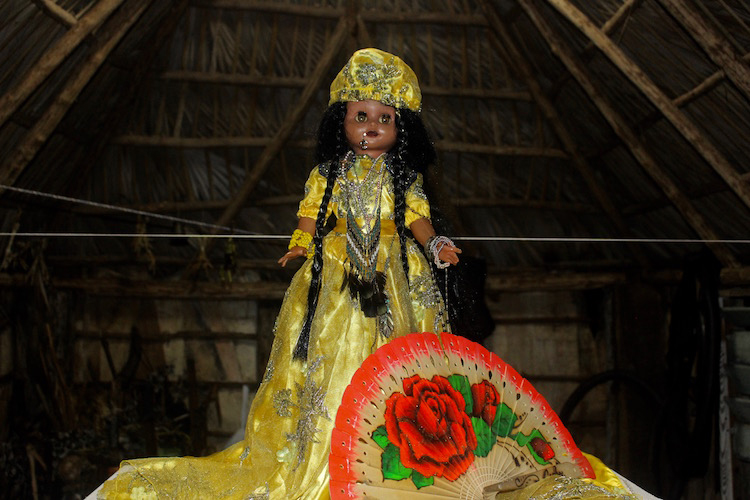 Santeria priest Raidel Miranda, 36, has a doll with a yellow dress on the altar representing Saint Oshún in his house-temple built by hand using branches and leaves like the slaves did in the 1500s | Natalie Bauta

“Hurricanes bring down the buildings in the city, but this little house made of leaves and branches never comes down,” Miranda said.

Miranda’s house-temple is intended to imitate the way slaves built homes during their time and he says it makes for a better environment for the practice and for the saints in Trinidad where foreigners with Cuban roots and other travelers are rediscovering this Caribbean folklore to possibly incorporate into their own lives or get a better idea of how this popular religion is practiced right at its origin.