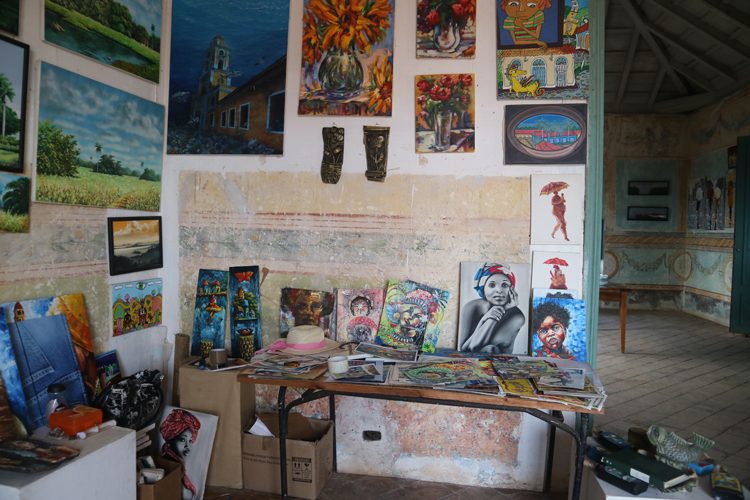 Exploring the Museums of Trinidad, Cuba

Although one might be tempted by outdoor activities outside of the southern Cuban city of Trinidad such as relaxing on the nearby Ancón Beach, hiking to waterfalls and taking a horseback ride to the sugar plantations in the Valle de los Ingenios, a visit would not be complete without exploring some of the history and culture in the old part of town.

Declared a UNESCO World Heritage Site in 1988, Trinidad boasts a very good preservation of its colonial houses. Surrounding the Plaza Mayor, several have been converted into fascinating museums. Tiny in size but rich in content and architecture, they provide insights into understanding the city’s past, present, and future.

Trinidad was founded by Spaniard Diego Velázquez de Cuéllar in 1514 under the name of la Villa de la Santísima Trinidad. Interest in the region soon disappeared due to news of riches in Central America, and it was not until the mid-18th century when a sugar boom converted it into one of the colony’s most prosperous cities. Starting from the 1950s, tourism has been on the rise, and walking on its cobblestone streets and listening to the hooves of horses, visitors can enjoy a journey through time.

Located on the south-east side of the town’s Plaza Mayor, the Colonial Architecture Museum is distinguished by its white grilled windows and sky-blue walls. Constructed in 1738, it is the former residence of the Sánchez-Iznaga family, which owned one of the region’s many sugar mills. In 1976 it was sold to the state and two years later opened its tall, white wooden doors to the public. “It is the best example of architecture of the city,” says museum guide Luis Villa.

The main house is composed of eight exhibition rooms which provide a brief architectural history of Trinidad with fascinating displays of old clay floor tiles, wooden columns, ceiling panels and more. Other exhibits include the wrought iron grills for protecting the doors and windows dating from the 18th and the 19th centuries, ceramic gargoyles for conducting rainwater, a doorknocker in the shape of an Arab princess’s hand, and even a wooden stock for holding the feet of slaves brought over from Africa to work the sugar plantations.

Villa, 59, has worked in the museum for eight years. “The most important feature of the Trinidadian architecture is that it’s a mixture of different architectural styles.” This is exemplified by the potted plants and big trees in the courtyard, representing Japanese and English styles, respectively; and as well by the furniture and appliances in the house and outbuildings.

The furniture comes largely from Spain but also originated in other countries. For example, there is an elaborate cast iron shower imported from the United States in 1912, an English porcelain toilet, a table from Italy, and a gilded mirror from Germany. But what is more fascinating is that the architecture is not simply a combination of different foreign styles, but a smart adaptation to Trinidad’s steamy climate with high ceilings and large windows for better ventilation.

Just steps from the museum, on the south-west side of the plaza, is the Galería de Arte Universal Benito Ortiz, also known as Palacio Ortiz. Built between the years 1800 and 1809, it belonged to the alderman Don Rafael Ortiz, and opened as an art gallery in 1983.

Although a small gallery, there is much to keep one engaged. The first hall showcases some pieces of work of the artist who gave the gallery its name, Benito Anselmo Ortiz Borrell (1896-1989). His naïf style is characterized, according to the museum, by the “ingenuity of perspective, the spontaneity of the lines, the expressive richness of color, and, above all, the poetic magic that surrounds them.” Using bright colors, his paintings depict streets and buildings of Trinidad and tell the history of the country. 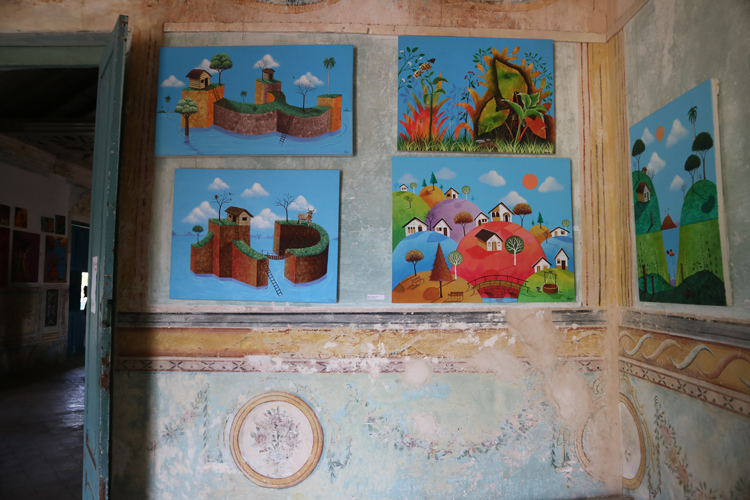 In the halls on the left and on the second floor, temporary exhibitions of works by other Cuban artists are featured. On the second floor, you can also find many artworks for sale. “We are the only official gallery of the city,” says a member of the staff. The balcony surrounding the north side of the gallery overlooks the Plaza Mayor, offering a nice view of the heart of the city.

Apart from the artwork, the frescoes adorning the gallery walls cannot be missed. In one room on the second floor, a blue background is decorated with flowers. Interspersed amongst the paintings, the frescoes are works of untrained artists who painted the designs as part of the décor when the building was a family home in the 19th century. Unfortunately, some have since been covered by newer layers of paint.

“They didn’t know their value,” says Elisa Ramirez, specialist of the gallery. However, in 2014, the year of the city’s 500th anniversary, the Ministry of Culture started to restore the hidden paintings. Elisa points to a rectangular piece across the hall. Blue, red, and yellow, fading but still expressive, the original painting stands out on the white wall. “The rest is very hard to recover, that’s why we only have this little piece here. The restoration cost is also very high,” she explains. 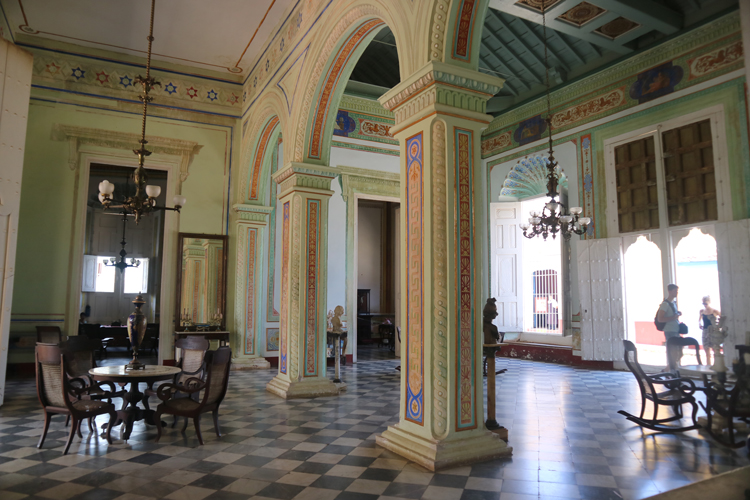 Coming out from the gallery and walking down Calle Desengaño, on the right you will find the Museo de Historia Municipal. Also known as Palacio Cantero, it first belonged to the Borrell family from 1827 to 1830, and then was transferred to plantation owner Justo Cantero. Since 1967, the house has undergone extensive restoration and in 1980 it opened as a museum.

The exhibition is divided into four parts, the main hall being kept as it was a century ago. Decorated in neoclassical style, it has light-green columns adorned with delicate patterns, a black-and-white tiled floor, and well-preserved period furniture. The next halls tell the history of the region with objects, pictures, and texts in both Spanish and English. There is also a hall of arms and one dedicated to the sugar industry. 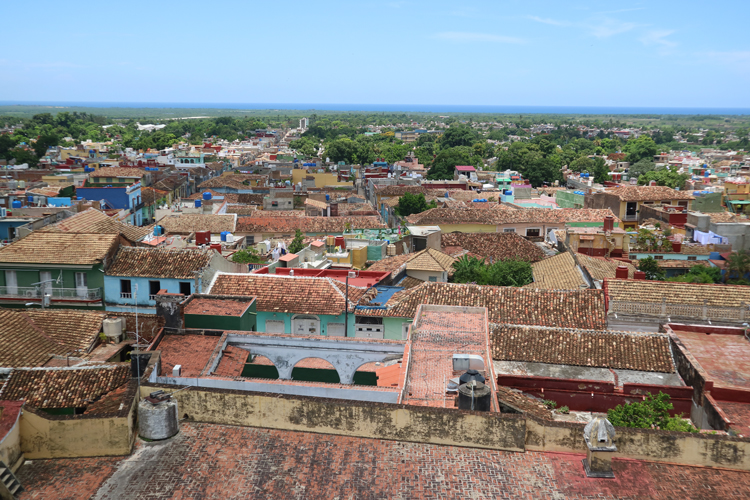 The view from the Museo de Historia Municipal | Zhen Fu

The museum is worth visiting not only for its thorough explanations and valuable historic objects, but also for the splendid view from its watchtower. After climbing a steep, narrow staircase and a dizzying, spiral one, visitors will at last be able to relax and wonder at what they see: a 360- degree view of the multi-hued city. The Plaza Mayor, the Iglesia de la Santísima Trinidad, and the bell tower of the Museo Nacional de la Lucha Contra Bandidos are all in clear sight, with the mountains on one side and the sea on the other.

Famed as “the museum city of the Caribbean Sea,” Trinidad has much more to offer. Aside from the above-mentioned museums, one could also check out the Museo Romántico, Museo Arqueología (Archeology Museum), and the countless shops with artworks around the Plaza Mayor. Walking out of the museums, you find yourself again surrounded by the pleasant bustle of this vibrant city, and something new can be discovered every time you look.