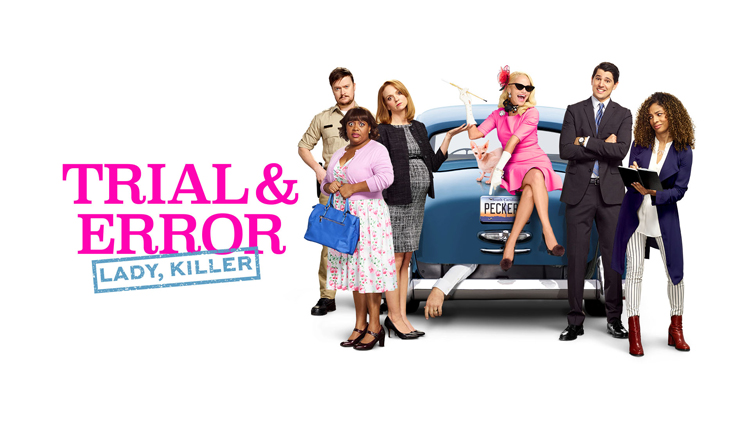 NBC’s second season of Trial and Error, a mockumentary series in the same vein as Parks and Rec or The Office which parodies the true crime genre, recently premiered on the network on July 19th after an under the radar first season. This season follows defense attorney Josh Segal and his associates Anne and Dwayne as they attempt to prove the innocence of local celebrity Lavinia Peck-Foster, who has been accused of murdering her husband, thus granting this season the subtitle “Lady, Killer”. After watching the first episode of last season, the show quickly became one of my favorites, a feat due primarily to the strong, hilarious cast which make up the show. Though many of those characters have changed between the first and second season, the four members of the main cast have remained the same, making the second season familiar and ensuring it carries the same brand of hilarity seen in the first. However, this does not discount the contributions of this season’s new cast members, and so here is my ranking of the top ten characters from Trial and Error: Lady, Killer. 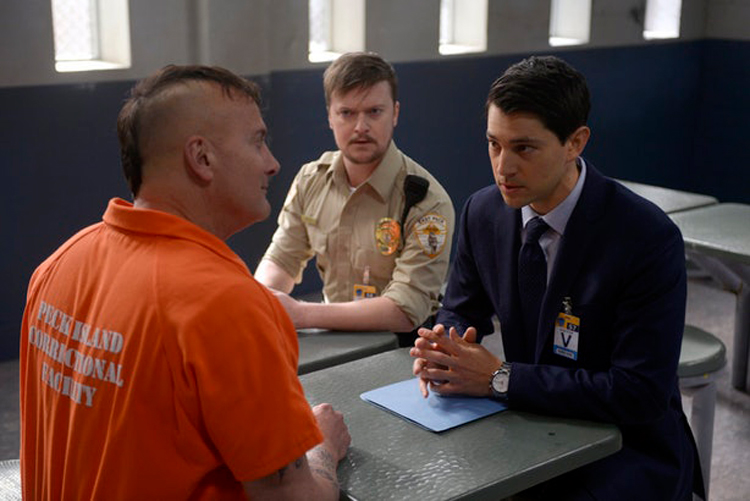 Though Jesse Ray is not granted a great deal of screen time – at least through episode four of this season – he appears to be one of this season’s key players. He is a character whose life path is deeply interwoven with that of Lavinia, both because he was once an apprentice clockmaker under her husband and because he stood trial for the murder of her brother. In spite of all this, Jesse makes the list because of his odd knowledge of clocks and the enthusiasm with which he volunteers his expertise to help the case of the woman who worked to make sure he went to jail once he is offered a chance to appear on a famous podcast about the ongoing trial. I also get the feeling that Jesse Ray will become an even more important figure later on in the season.

While his proposed campaign sign for Carol Ann reinforces their town’s outdated gender notions, his unapologetic and unrestrained expression of pride and enthusiasm in the face of Carol Anne’s courtroom prowess and triumphs is admirable. 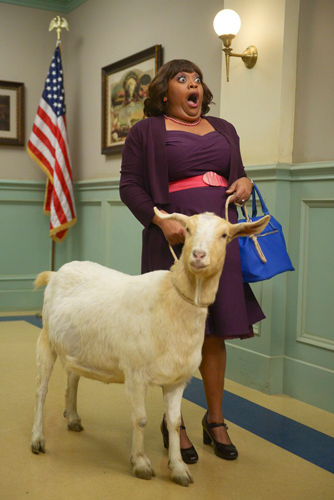 Won during an accidental bid by Anne, John Lithgoat makes the list solely because of the jokes the writers are able to make as a result of his presence, including an interrogation technique dubbed “good goat bad cop” – the best of which is the goat’s name, a tribute to John Lithgow who played last season’s defendant, Larry. 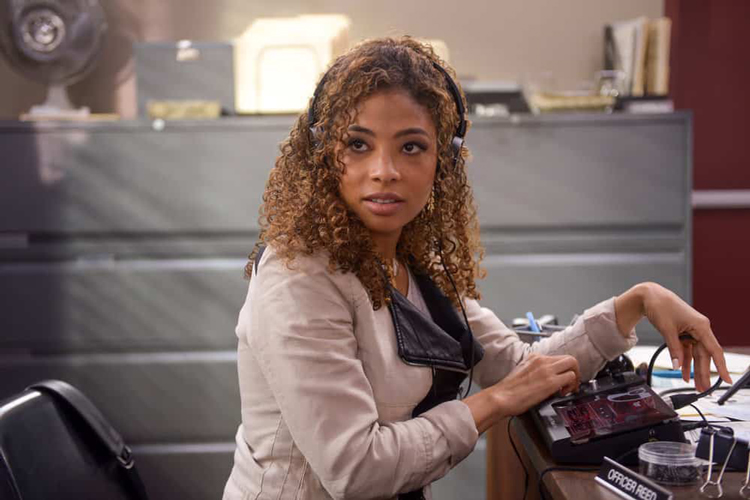 Nina seems nice enough, and coming from New York allows her to serve as a means of juxtaposition to the town’s weirdness, a role that was reserved for Josh last season before his integration into East Peck life following his move there. Her origin also grants her a kinship with Josh, allowing for a hint of a love triangle between the two of them and Carol Anne. It is this latter fact which serves to lower her ranking on this list, because it almost seems as if this is hitherto the extend of her character’s primary function.

I am incredibly intrigued by her podcast about Lavinia’s trial, however, and get the feeling it will play a vital role in the outcome of the case.

If the name alone wasn’t enough to warrant his inclusion and ranking on this list, Judge Kamiltow also speaks comically low, his voice a hoarse breath of nonsense that only his fellow native East Peckers can understand. This leads, naturally, to a great deal of confusion on behalf of Josh, who cannot understand him, as well as a hilarious flashback to the incident which caused the judge to lose his voice, which involved shouting in an attempt to halt an altercation between a younger Carol Anne and Jesse Ray Beaumont during the latter’s trial years ago. 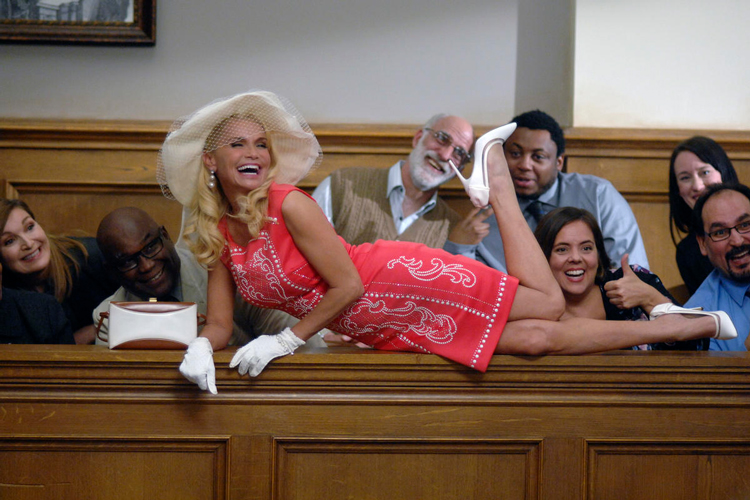 Possibly the craziest character I have ever encountered, Lavinia Peck-Foster is the star both of her town and this season of Trial and Error, standing trial for the alleged murder of her husband, Edgar. Wealthy and eccentric, Lavinia calls to mind an odd combination of Audrey Hepburn, Hannibal Lecter, and Elle Woods, a role for which Kristen Chenoweth is perfectly suited. Though it is difficult to tell whether or not she is truly guilty, Lavinia is nonetheless a sympathetic character, having suffered through the death of her mother, father, brother, former friend, and now Edgar, losses which make her appear vulnerable and prompt feelings of protectiveness toward her. 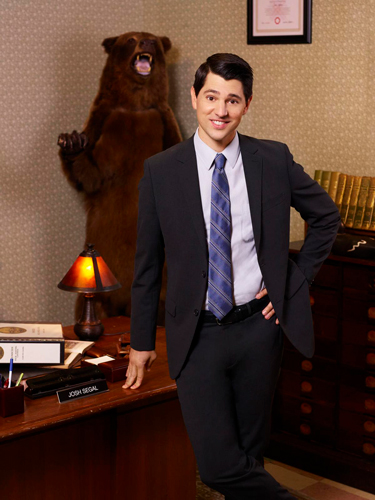 The show’s true protagonist, Josh Segal is the defense attorney tasked with proving Lavinia’s innocence. Josh is incredibly sweet and optimistic, and this season we get to see him fully embracing the craziness of East Peck, a change in his characterization that makes him appear much more comfortable in such a strange environment but which does nothing to reduce the hilarious moments of confusion that inevitably arise when he learns something new about the town and its customs. These instances range from finding out all women drivers in the town must travel with a flag boy who runs in front of the car to warn people a lady driver is on the road to dealing with a judge with no voice to discovering that each quadrant of the town (east, north, south, west), is in a different time zone. Josh is also incredibly compassionate and cares deeply for his clients. The only thing that bars him from a higher position on this list is the fact that there are so many strong characters on this show, the remaining three are just a bit funnier and more complex. 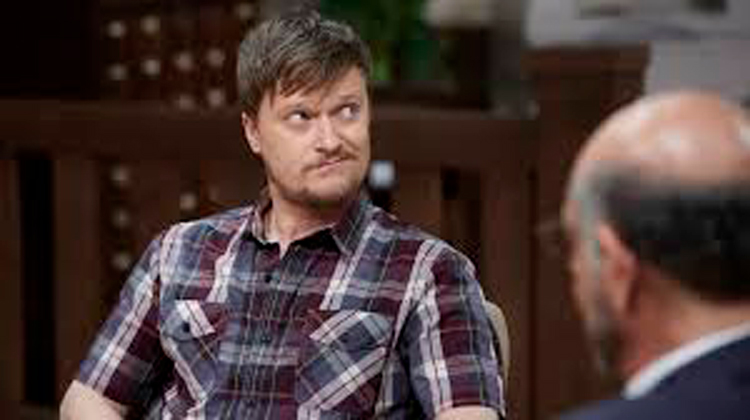 Though initially assumed to be the show’s most obvious source of comic relief, Dwayne Reed has asserted his position as a vital character. While obviously not the brightest individual in East Peck, he is incredibly goofy, sweet, earnest, and determined, characteristics which come second only to his loyalty – both to his friends and their defense business as well as to his position as an East Peck deputy. Dwayne’s comedic timing is impeccable, and his blunders and sporadic bouts of genius ideas go a long way in helping Josh make his case. 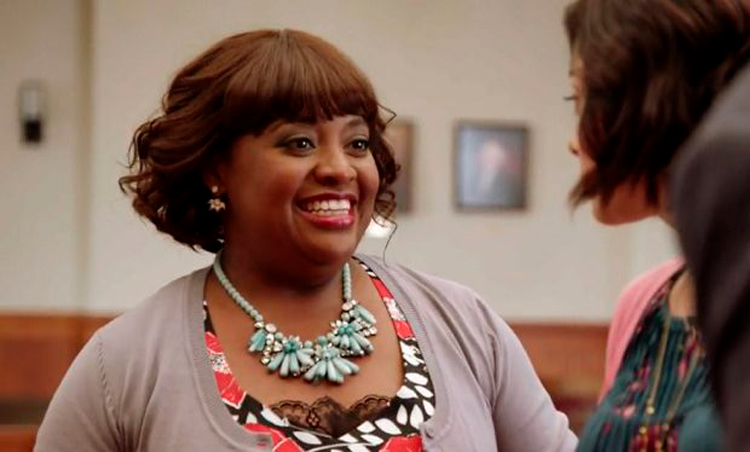 Anne is unlike any other character I’ve ever encountered. She is unbelievably sweet and very unassuming; however, she consistently reveals that this is merely one facet of her personality. She is also equal parts sassy, capable, and sensual. What cements her uniqueness is the seemingly never-ending list of unheard of ailments, including one which makes her jump to extreme heights when frightened, one which leaves her unable to recognize faces, and one which sees her randomly raising her hand unbeknownst to her after she has had rum. Anne is without a doubt the heart of this show and without her there simply wouldn’t be a Trial and Error. 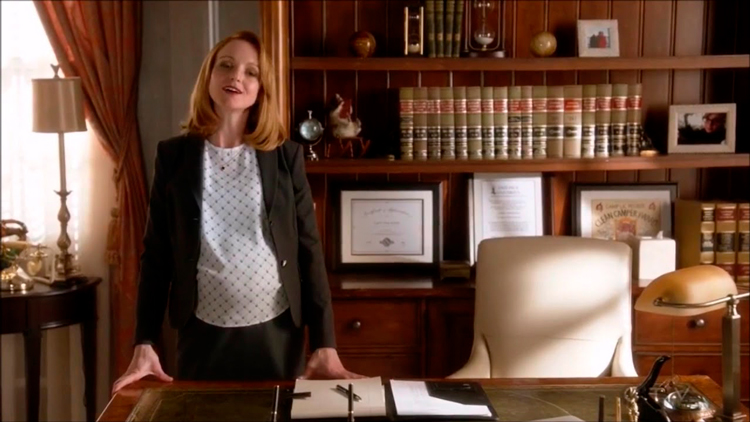 The choice between Anne and Carol Anne Keane was an incredibly tough one, but, ultimately, Carol Anne has cemented herself as my favorite character this season and thus the top spot goes to her. While not as outright goofy or sweet like many of the other top spot holders on this list, she is undoubtedly the character with the most depth and has no shortage of hilarious moments. These moments vary from the flashbacks to her angry outbursts in the courtroom during her early years as a lawyer to her constant snipes at other characters and her visits to a veterinarian for her ob/gyn appointments during her pregnancy because none of the doctors who treat humans will see her as a result of her attempt to prosecute Lavinia, the town starlet. She is shown to at times be very caring, especially in her moments of vulnerability when we are able to get a glimpse of her feelings for Josh, her on/off lover, and her insecurities about being a woman in law in a sometimes-sexist southern town. It is this latter moment of vulnerability that simultaneously reveals her strength and ambition, as she constantly makes it known that she refuses to be limited by her gender, a determination that leads her to run for DA against the male incumbent as well as one which sees her working just as fiercely this season as in the season prior even while being far along in her pregnancy. This unapologetic ferociousness and ambition contradicts with outdated patriarchal notions of femininity or womanhood, cementing Carol Anne as a new feminist icon, one whose absence would act as a huge blow to the show.

Check out Trial and Error: Lady Killer every Thursday this fall at 9pm!