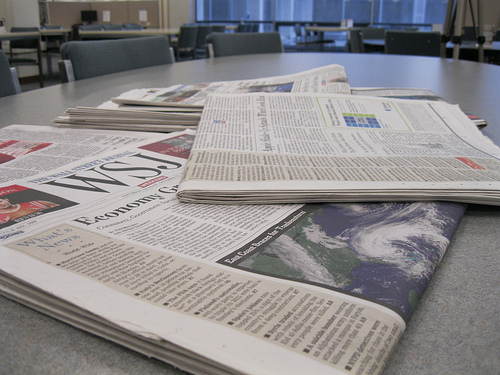 The world of journalism is extremely interesting and being able to have access to the backstage of a newspaper, a magazine or a news programme and have a look at the process of reporting news is fascinating. Here is a list of films and Tv series inspired by the works of journalists and documentaries which tell the real world of journalism.

We Are Journalists is a documentary by Ahmad Jalali Farahani, a journalist from Iran, who bravely decided to tell the world how difficult, or better almost impossible, it is to work as a journalist in his country. As a matter of fact in Iran news are under complete control of the government and therefore journalists have to fight constantly for freedom of expression and press against censorship.

An HBO Tv series starring Jeff Daniels as Will McAvoy, the anchorman of the news programme ‘News Night’ which is aired by the fictional channel ACN. The most interesting aspect of this show is that in all three series, ‘News Night’ deals with events inspired by some real happenings of the last years, such as the Boston Marathon bombing.

This film is based on the true story of Stephen Glass, a journalist who at the age of 23 joined the team of The New Republic, the American magazine which deals with politics and culture. Glass’s career at the magazine is brilliant since the beginning, until Adam Pennenberg, a journalist of Forbes.com, discovers that Glass’s piece about a young hacker is completely made up.

The title of this documentary is eloquent: the film is the result of one year of shooting inside the newsroom of one of the most famous and important newspapers in the world and it shows how the columnists, editors and reporters of the New York Times work on some of the most important stories and scoops of the last years, from the Afghan war logs to the release of the Ipad.

Spotlight was presented at the 72nd Venice International Film Festival and tells the true story of how a group of journalists of the Boston Globe discovered and exposed the sex abuses of a degenerate clergy in Massachusetts.

The last documentary by Martin Scorsese reconstructs the history of the New York Review of Books, one of the most influential American magazines.

“Good night, and good luck” is the famous sentence with which in the 50s Edward R. Murrow used to close his news programme for the CBS. In 1953 Murrow challenged and denounced Joseph McCarthy and the methods the junior senator used to accuse American citizens of being involved in the Communist Party.

An now let’s have a glimpse on fashion journalism.

The well-known film about the fictional fashion magazine Runway and its fearsome editor-in-chief, Miranda Priestly. For lovers of fashion and fashion journalism this is a film to watch and re-watch over and over again.

For those who loved The Devil Wears Prada, you can’t miss The September Issue, the documentary by R. J. Cutler which brings you behind the scenes of the most influential fashion magazine in the world, Vogue US. The viewers follow the work of the editors of Vogue, but most of all they follow its editor-in-chief, Anna Wintour, and are shown how the most important issue of the year is created.

This documentary follows the work of Bill Cunningham, photographer and columnist of the New York Times, who for decades have been documenting the changes of New York fashion by taking his pictures on the streets of the Big Apple every day. This film is a complete insight in the life of one of the first and best street-style photographers ever.

Now let’s get inspired by all these stories.