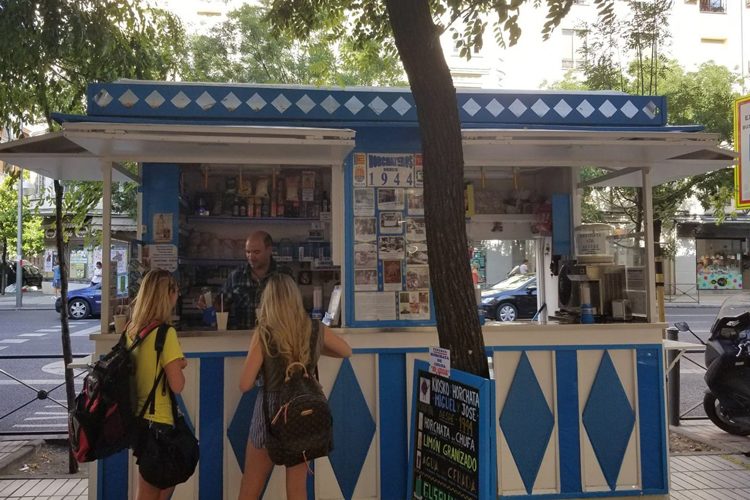 The sizzling summers of Madrid can be rough, but they can be tolerated thanks to the classic Spanish drinks that the locals are enthralled over. As you travel the city, you will see residents and tourists alike enjoying a sangria, tinto de verano, clara con limón, cava, or a horchata to cool them off. Drinking your way through the summer is a wonderful way to cool down and at the same time experience the culture of the city. 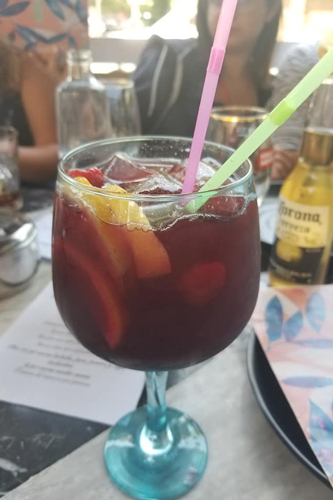 It’s not a surprise that sangria is Spain’s favorite drink for the summer due to it being so refreshing. Traditionally, the punch is a mixture of red wine, orange juice and brandy, with sliced fruits such as oranges or lemons. Nearly every restaurant/bar will have this classic. As you venture off into the city, you don’t want to miss the sangria at the Mozza Bar. At only €4.50 (about $5.25), it’s a great first stop on my drinking adventure. As the server set it down in front of me, my mouth automatically watered as it looked dazzling to the eyes. The burnt red color of the punch was bright in the sun and the accompanying taste was sweetened just right due to the added orange slices. All I wanted to do was take another swift sip.

Another great sangria is at the Ojala restaurant in Malasaña, a hip neighborhood filled with a vintage atmosphere. After ambling down the streets of graffiti-embellished walls and shopping to your heart’s content, you will be ready for an ice cold and refreshing sangria. Only €3.20, this one came in a smaller beer glass with red wine, orange, lemon, gin, and vermouth. It didn’t taste as sweet as the one from the Mozza Bar, but it still had me sip after sip with the uplifting aftertaste of the red wine. 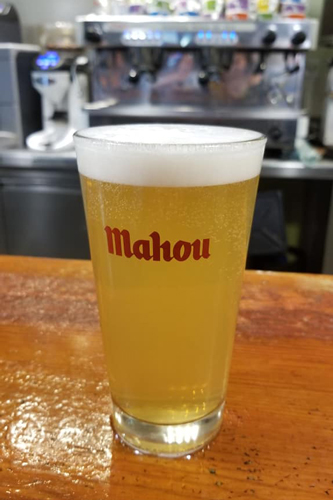 This drink is simple as it just has two ingredients: beer and lemon soda, like Fanta. You can order this one anywhere as well since it’s easy for them to make. If you like respectable company and a delicious clara con limón, go to Bulevar 54. The bartender, Eusebio Ronda, was very friendly. He chatted with us as he helped other patrons and poured me more when I had just taken two light swigs. Lemon tang with a musty note from the beer, a thin gulp was welcoming and refreshing after a day of walking in the Madrid heat. At only €2.80 a glass, it’s highly recommended. 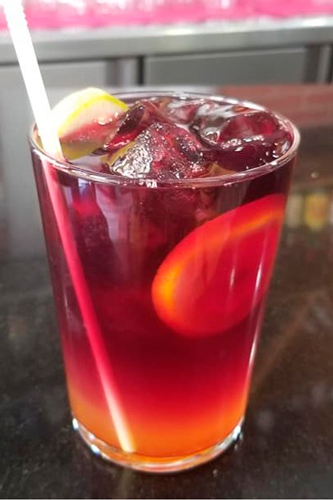 In the beating 20th century sun, Federico Vargas would give his overheated patrons a drink mixed with red wine and lemon soda and was shortly called tinto de verano, or summer red wine. Eusebio Ronda from Bulevar 54, said the drink was his favorite Spanish tipple because “it’s a good summer drink to drink on the beach” and I can’t help but to agree.

Cerveceria Antigua del Cascorro is a small restaurant where anyone can stop by for a quick drink served in a crystalline glass accompanied with orange slices. Indulging, I detected the lack of alcohol and the more noticeable taste of lemon. Therefore, it’s a simple drink that is sure to cool you down, but not make you fall over. 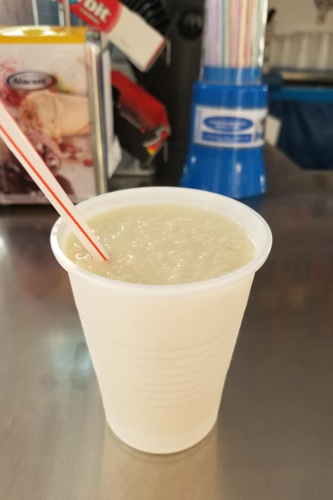 A horchata to go from Kiosko de Horchata | Sierra Knapp

This non-alcoholic beverage is a strange one when listing off the ingredients: tiger nuts, sugar, water, and cinnamon. Different from the Mexican horchata, which is made from rice, almonds, cinnamon, and vanilla. Served líquido or granizado (partly frozen), it’s a cooling light drink that will leave you wanting more.

The city has a special place that serves horchata that is home-made and vegan. Kiosko de Horchata is the last vendor that sells this type of specialty drink. Luckily enough, I stumbled upon the kiosk as I was wondering the streets and ordered a small one to go. The flavor is similar to a heavier milk that is fibrous in texture from the compressed tiger nuts with a cinnamon taste and the appearance of a plain vanilla milkshake.

Jose, one of the brothers that runs the kiosk, said that their horchata “is the best around because it’s homemade and is natural.” Their great-grandparents moved from the southeastern region of Alicante to Madrid in search of opportunities. They found out that a trade in horchata was disappearing and decided to make a kiosk as their business. Passed down generation after generation, the two brothers, Miguel and Jose, are now the proud owners. Their horchata is made from tiger nuts from Valencia, so it’s no wonder it tasted so fresh. €2 for a medium is a bargain for this enjoyable horchata. 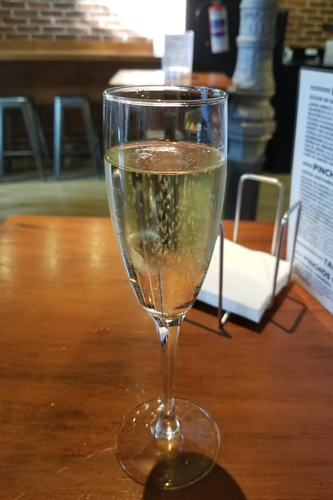 A glass of cava at Cava Baja 17 | Sierra Knapp

Considering you can acquire cava at almost any restaurant, I was looking for a more interesting atmosphere to have a glass of Spain’s sparkling wine and found a lively area with colorful streets lined with bars and restaurants called Calle Cava Baja in the La Latina district. Cava Baja 17, a pinchos raciones (Basque-style tapas) restaurant, was very friendly. I asked their bartender, Michael, about his favorite cava. He said, “they taste the same. Dry, but all very good.” I ordered a glass of A. Torelló, which he gracefully poured in front of me and waited until I tried it. The aroma was of apples and I compared the taste with prosecco, the Italian sparkling wine. Fairly cheap at €3.50 a glass, so definitely worth a taste.

These five classic Spanish drinks are each very delicious in taste and cheap in price. My favorite is cava because I enjoy wine more than beer, however sangria can never be topped since it’s so strongly identified in Spain as a classic cold drink and perfect during the sweltering summer.