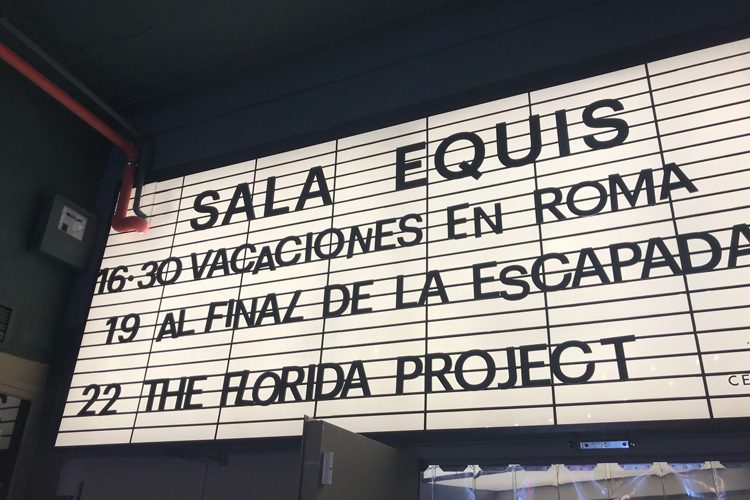 SALA EQUIS which is also a famous traditional movie theater in Madrid. People can drink while to see films because of including the bar | Masaaki Kato

There are many kinds of entertainment in the world such as playing sports, listening to music and traveling to other countries. Watching movies is one of the most popular hobbies and entertainment activities with American films the gold standard and almost always dubbed into the local language. And with Netflix and other movie-on-demand services available, it is easy to view films in the comfort of one’s own home in one’s own language at the click of a button.

However, in many countries moviegoers are keen to see films in the original language and aficionados in the Spanish capital are no exception. So, for those foreign tourists visiting the city who need their film fix but who don’t have the local language skills, there are movie theaters which provide such entertainment.

The very first Spanish film showing took place in Barcelona in 1895. Films by the French Lumière brothers were soon being shown both in Barcelona and in Madrid.  Over the next century, the Spanish film industry grew with homegrown directors such as Luis Buñuel, Luis Garcia Berlanga, Fernando Trueba, Isabel  Coixet  and two-time Oscar winner Pedro Almodovar gaining international acclaim.

And Spanish actors are also known worldwide such as Penelope Cruz who won the Oscar for best actress in 2007 for her role in Almodovar’s “Volver”,  about the trials and tribulations of three generations of Spanish women. Her husband, Javier Bardem, has been nominated for an Oscar for best actor twice and won the best supporting actor award in 2008 for his role as a contract killer in “No Country for Old Men”.

Two movie theaters in Madrid which show films in their original languages and hold retrospectives of noted directors are the Cine Dore and the Sala Equis. 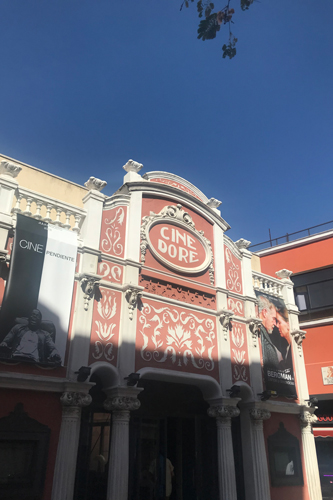 Cine Dore which is the one of the famous traditional movie theater in Madrid. The exterior of the Cine Dore is very traditional and beautiful | Masaaki Kato

Cine Dore is a movie theater managed by the Spanish Ministry of Education, Culture and Sports with a ticket price of 3€ (around 3.50 dollars ). For an idea of the types of films shown here, in one week in July, around 20 films were on the schedule including  “How to Talk to Girls at Parties,” from the United States,  Sweden’s “The Magic Flute” and “The Red Shoes” from the United Kingdom. All films at this theater and the others included here show films in VOSE, which means in the original language with Spanish subtitles.

Built in 1923,  the Cine Dore’s facade of blush red and white is magnificent. The inside of the theater is equally stunning, resembling an old-time opera house and even boasts private loge-type seating. Not exactly your American mall multiplex.

“Our movie theater is very traditional, so many foreigners are coming every day,” says Pedro, an employee at the theater.  “I think most people come from Europe but sometimes there are Asians and Americans. We do not pick films because of their popularity.  Our cinema is managed by the Ministry of Education, so we choose more historical films and those with deep stories.”

“If people like old films or original language films, they come to our cinema,” he continues, “and I think some people do not like a lot of films made these days which are loaded with special effects.” 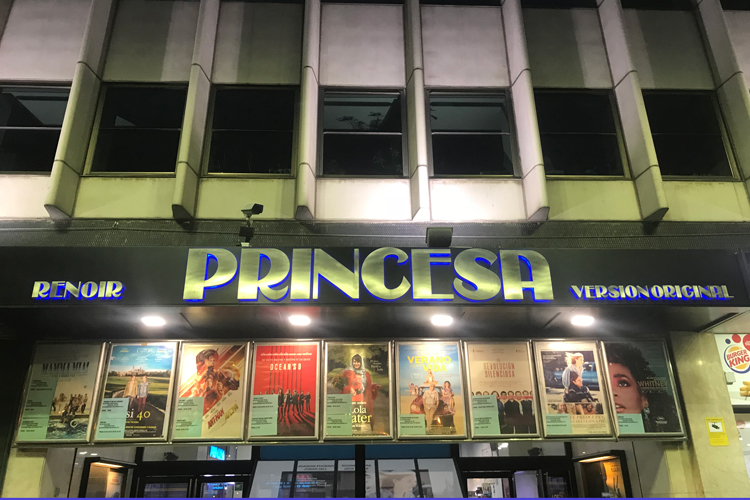 Cines Princesa which is the one of the worldwide movie theater. It looks like very local theater and they show the famous and popular films | Masaaki Kato

For films in the original language in an environment closer to the U.S. movie theater experience, there is the Cine Princesa near Madrid’s central Plaza Espana. With 11 screens and showings beginning in the late afternoon, the cinema has both Spanish and foreign films ranging from Hollywood fare to art house offerings from France, Germany and other European countries.

“I like to listen to the original English to learn how to pronounce well,” says Pablo, waiting in line at the theater to see  “Sicario: Day of the Soldado.

His friend Jorge explains he also likes original version films so as to improve his English. “I think it is better to watch a movie in the original version because you can appreciate the acting better ” Jorge adds.

Recently, the theater was screening “Mama Mia! Here We Go Again”, “Ocean’s 8” and “Hereditary”. All excellent entertainment and if you’re in Madrid and need that film fix in your own language or want to check out more exotic fare, these theaters are just the ticket.