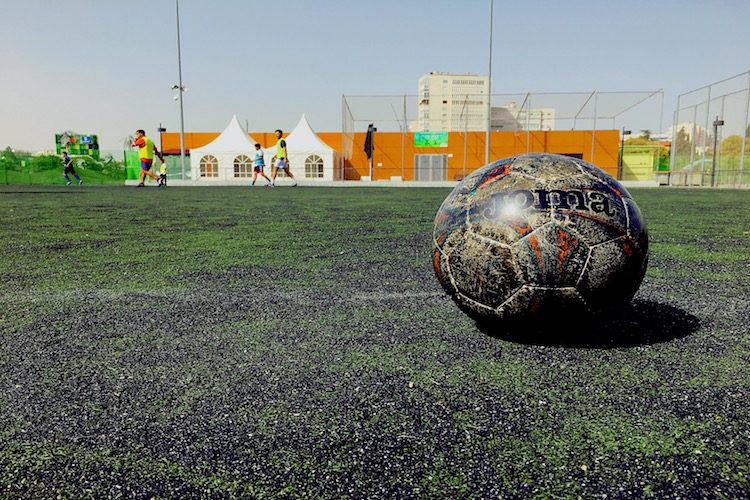 Just One of the Guys: My Soccer Escapades in Madrid

What’s the most popular sport? And no, I don’t just mean most popular sport in the US – I’m talking globally, as in all around the world. If you guessed anything other than soccer, you’re wrong. Soccer also known as futbol, not only has the highest number of fans (4.0 billion followers) but it also generates the most money annually. With all that being said, I’m here in Madrid, Spain which is one of the top countries to play in, and I cannot seem to find women who are just as fascinated with the game as I am. With dominating names like Cristiano Ronaldo, Lionel Messi, Sergio Ramos, and Gerard Piqué to name a few, you’d think that there were some female counterparts who were equally as praised. 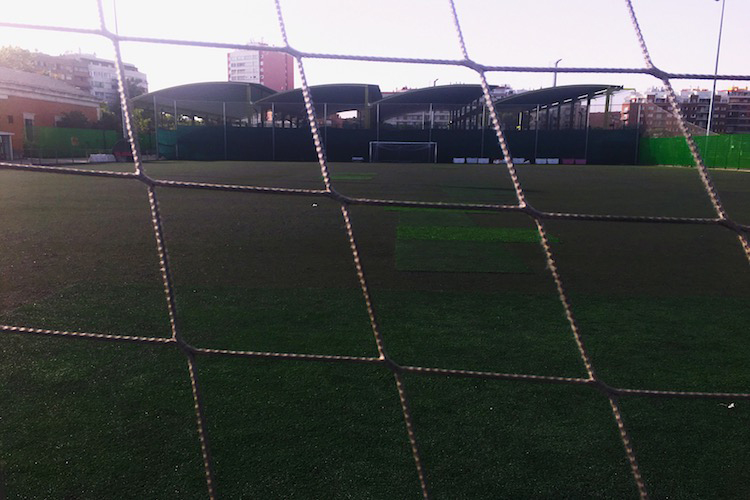 My search for female soccer players started by downloading the app called IF7Sports. If you love meeting new people and playing quality pick-up games for a cheap price (around $5), I highly recommend you use it. I was nervous for a few reasons: I noticed I was the only girl signed up for that particular game, and even more nerve wracking than that, “What if these men don’t speak English?” My knowledge of the Spanish language started and ended eight years ago during my high school career. So, let’s just say — I came prepared to use a lot of hand gestures.

I managed to introduce myself to some of the guys stretching. The organizer for the game, handed out our colored bibs to wear: I was on the blue team, and most of my teammates spoke enough English for us to understand each other. At the organizer’s signal, the game started and my nerves immediately left my body. The pace was decently fast, and these guys were pretty talented for pickup game standards. I had to show off some of my skills, and the guys would cheer whenever I faked someone out, and especially when I would score (twice) they would go crazy! The game lasted an hour, and my team took home the grand prize of bragging rights. As much fun as I had, I couldn’t help but wonder why there weren’t any other women around. I mean, there was this one other lady — but she turned out to be someone’s girlfriend who just came to watch. 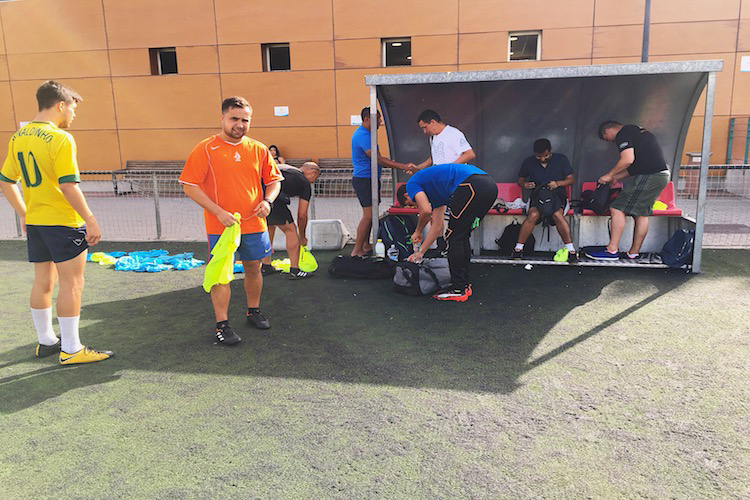 “Here, women play with women, and the men play with the men, but only depends — the women don’t play like a free game, usually they play professionally. So it’s not usual to play with women in a friendly game,” according to Danny Guerra, a regular player in the street soccer scene.

Mr. Guerra let me know that women’s soccer in Spain is not nearly as popular as I originally assumed.

“In my case, I like so much to play with girls; I feel like I play much better. It’s like I get to think more, and with guys it’s more about being physical and fast,” Mr. Guerra continued. The more matches I came to play, the more I talked to the men casually about their opinions on women’s soccer. Surprisingly, an overwhelming majority enjoyed watching professional women’s matches. 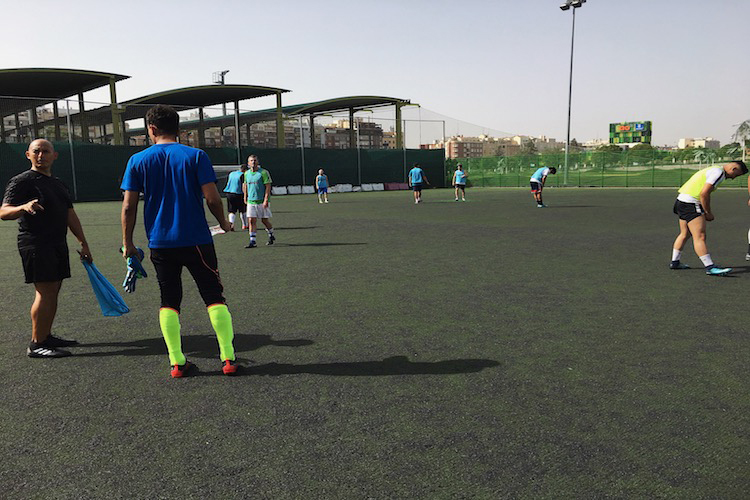 I was curious to see just how uncommon it was to have men and women play together, so I sat down with the organizer and creator of the IF7Sports app, Israel Sevillano. “The Spanish girls don’t really like to play with the guys, but the American girls have no problem”, Mr. Sevillano pointed out.

It seemed to me that I was destined to be the only female on the pitch when I would show up to play. I guess in a way I was living every girl’s dream: surrounded by a sea of men — some of which were very attractive, if I say so myself. Although it was nice to be just one of the guys, the question that I couldn’t quite figure out was: “How could a nation known for some of the biggest names in soccer history lack so much enthusiasm for female players?”

“It’s publicity. The companies want someone to invest their money in and at the moment they are investing their money basically in Ronaldo and Messi. The minute Ronaldo goes to Italy, he’s going to sell out all those jerseys, but what they lack at the moment is a woman that has that same influence”, Sevillano continued. 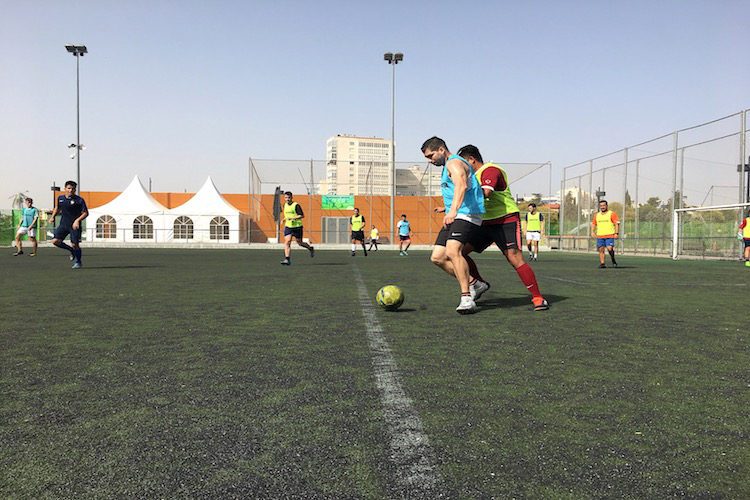 This is actually quite true. Take for example, Cristiano Ronaldo’s salary; $30 million a year for the next three seasons. Teams shell out that kind of money because they know that they will get a huge return. “FIFA (Federation International Football Association) is one of the most lucrative sports organizations in the world, with $5.7 billion in annual revenues, according to Forbes. By selling out stadiums, jerseys, giving out autographs to frantic fans and other paraphernalia, both FIFA and the clubs make more than enough to pay their athletes crazy amounts of money, and make a profit. The ticket sales for the previous World Cup in Russia were astronomically high: Russia alone sold 871,797 tickets (the highest ticket sales for a country), and the total number of tickets sold between the top 11 nations that sold the most was an astonishing 1,427,797 tickets.

Let’s not forget the sponsorship deals, and the vast amount of commercial time these male soccer players receive on a frequent basis. As for the women, a girl can only dream to see the kind of figures the men do. One set back is that there aren’t enough famous female players. Yes, we’ve heard of Mia Hamm, Abby Wambach, and maybe Alex Morgan, but that’s about it — and they are all American. Popular Spanish women are even more rare to come across. When I would ask the guys I met if they could name some popular Spanish women, not a single name came to mind. It really shocked me, especially in a country that is so involved and in love with the game. The lack of sponsorship as well as media coverage play a role in the general disinterest with the female side of things. All over the world the scenario of women’s sports — specifically soccer, taking a backseat to their male peers, is sadly very common and overplayed. It’s particularly even more difficult to prosper as female players in countries where soccer is the number one sport. That’s why the US women’s national team is relatively better off than most nations, because Americans are more focused on American football, baseball, and basketball. Even then, professional female players in the US are grossly underpaid compared to the men (a pay ceiling per player of just $37,800, compared to an average of more than $300,000 for men’s Major League Soccer). 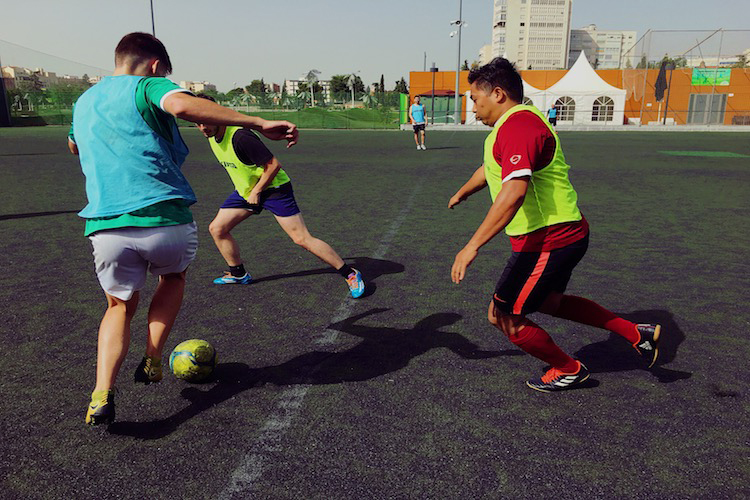 An impressive 1v2 scenario during the match | Otandeka Laki

The sad reality is that, there is still a great amount of sexism and discrimination that women face in the game of soccer, and in a country like Spain where you have more of a traditional upbringing, it’s no wonder why things are the way they are today.

I enjoyed my time here in Madrid. My experience playing with the guys made me feel like I was in the 2006 film, She’s the Man. Only this time, the setting was not in America, there was no constant crossdressing taking place, and Amanda Bynes had much more melanin. The popularity of men’s soccer is so overwhelming, that they are pushing the women’s teams out of the limelight. Despite not being as well marketed as they should be, wage discrepancies, and the discrimination, there have been strides in the right direction to further promote the game for girls. For instance, there is a wave of talented young women that are becoming a part of La Liga (such as Amanda Sampedro, Alexa Putellas or Teresa Mérida), which will hopefully give the women that star power and more endorsements that they are currently lacking. The future for women’s soccer in Spain, and all over the world, is bright, and one day it could truly be monumental.