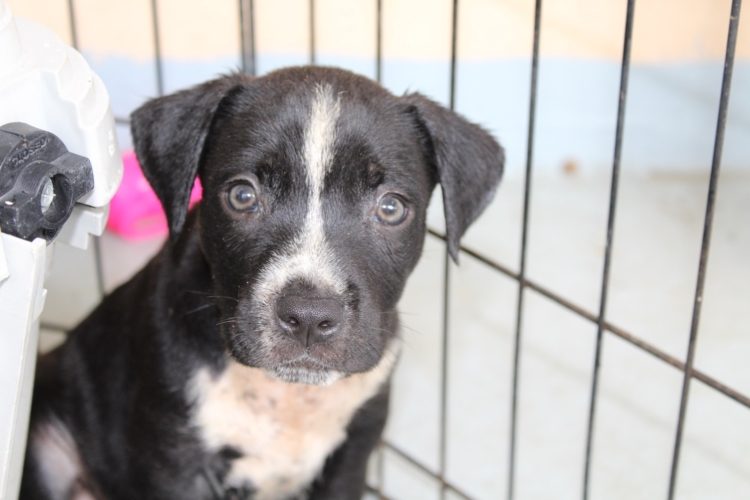 Puppy Rescue in Paradise: From Puerto Rico to Loving Homes

Every rescued dog, much like their human counterparts, has their own unique story. Many of these stories begin in Puerto Rico, where the island’s Colegio de Veterinarios estimates that about 100,000 stray dogs, locally referred to as “satos,” roam the island. Other rescue groups place this number as high as 300,000 dogs. While all distinct in some way, many of these satos’ stories have some consistent factors.

For one thing, most of these abandoned or stray dogs end up in their situations because of poverty, cultural tendencies against castration, and the lack of shelters or government services addressing the problem. Most satos are rescued through a collaborative effort between nonprofit organizations, vet technicians, foster families, and other volunteers – both on the island and in the continental United States. This past October, I participated in the rescue, fostering, transportation, and adoption of fifteen puppies from the East Coast of the island. This is their story. 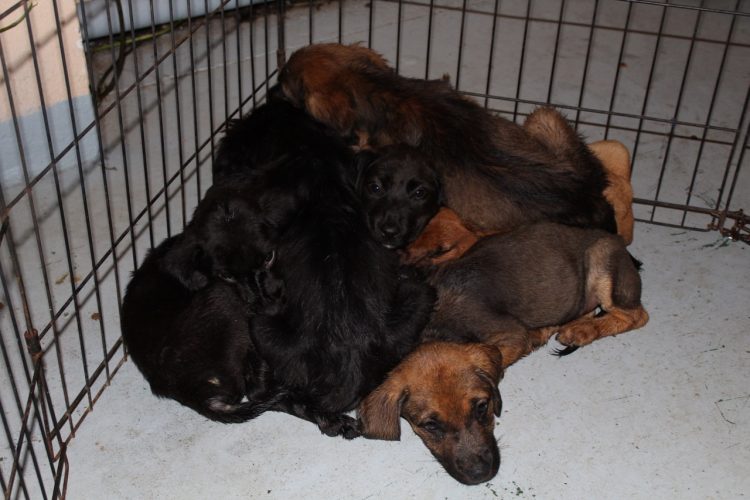 Local volunteers and volunteers from the Eleventh Hour Rescue in New Jersey meet in Eastern Puerto Rico after receiving a call about eight puppies who need shelter and medical attention. Their mother has an owner, but the dog gave birth unexpectedly and the owners cannot afford to take care of puppies. Still struggling after Hurrican Maria, the family is overwhelmed but wants to do the right thing. That’s where we come in. We arrive, assess the situation, and then we go to work.

Lucky for these pups, they’re in the hands of pros. Quickly, vet technicians get to preparing vaccines.

After we set up a pen to separate the puppies, the team gets started. The brave little survivors take the needles like champions. Once everybody gets their shots, we’re loading them up into the car back to San Juan. They’re set to be staying with their foster family for two days while they wait to be flown out to a shelter in Virginia or New Jersey. They will be fostered alongside seven other puppies who were also picked up by rescuers from the Eleventh Hour on the notorious Dead Dog Beach. The puppies are all timid and scared, wondering when this will all be over. Little do they know their journey is just beginning. After the 30-minute drive back to San Juan, we get the babies fed and settled for what’s ahead. 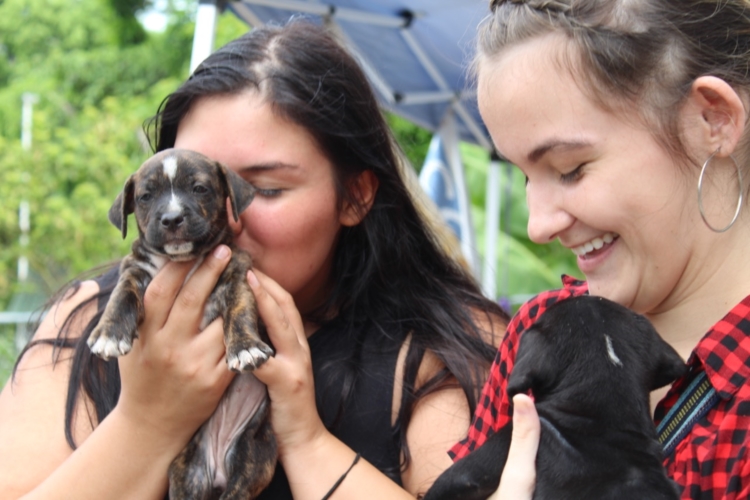 After a hectic first night, all 15 have their first visit to the vet’s office. When the office informs us we have to name them to fill out the paperwork, we keep it as simple as possible. The first litter is four boys, named A, B, C, and D, and four girls, E, F, G, and H. Our second litter is six boys, named 1, 2, 3, 4, 5, and 6, with one precious girl named 7. Everybody is checked from nose to tail, and the results bring good news. Everybody is doing well except puppy 1, who has a dislocated jaw. He’s given medicine and on his way to a smooth recovery. He refuses to let this very minor setback break his resilient spirit and is the first in his liter to become friends with his foster family. 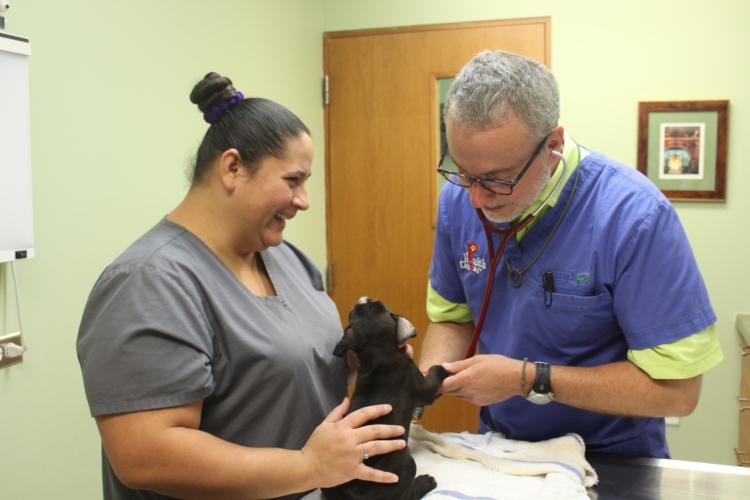 Typical in the impromptu and chaotic world of animal rescue, there’s been a slight change of plans. None of the puppies will be able to fly off the island until they receive their second set of vaccinations. They’ll be able to do so in two weeks, and they can be placed on the first flight after that. All 15 puppies have been accepted by shelters in New Jersey, so now the only goal is getting them as healthy and happy as possible.

The rest of the month of October goes by in a flash. Every single day, the puppies are developing more personality. They go from being terrified of people to embracing affection. Over the next three weeks, they become social, playful, terrific little dogs. But it’s a lot of work for the foster family. It’s 21 days of feeding, cleaning, bathing, medicating, and supervising 15 babies. But the knowledge that we’re helping save their lives, and the 21 days of puppy cuddles, make the exhaustion completely worth it.

Today is the most wonderful and most stressful day for on-island rescuers: transportation day. After being with their foster family for three whole weeks, the puppies are flying to Miami to then be driven to their respective shelters throughout New Jersey. After gathering food, water, and the dogs’ health certificates, volunteers work on assembling kennels. Once that’s done, they load up the 15 puppies into two cars and pick up three more fosters before heading to the airport. We drive down winding back streets to the cargo loading ports. Upon arrival, we submit copies of the dogs’ paperwork to the offices at the airport, and we double check to make sure everyone’s kennel reaches FAA standards. After that, there are some teary goodbyes as the puppies are taken by airport personnel to the next step of their journey.

The puppies have all arrived safely! They’re received by volunteers who begin the long journey to their new homes.

Two puppies have already been adopted out! Maverick and Finley were adopted by a family in New York. Finley has discovered that she loves the snow! 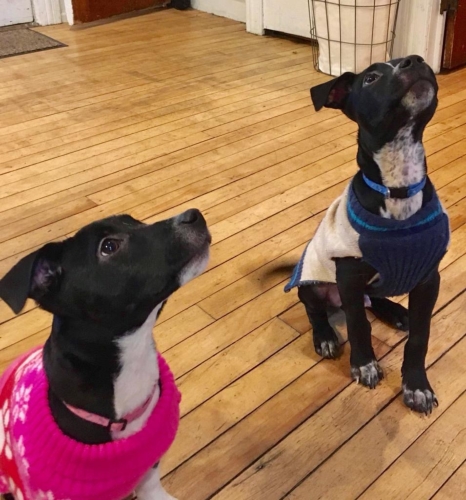 As of December 2018, all of the puppies we fostered have been adopted by loving families. All 15 of these stories began so ominously, and yet they’ve all had their fairytale ending. Even though animal rescue is exhausting, it is a labor of love. Many things that may seem like minor details, such as fosters, vets, search and rescue teams, transportation, among many others all greatly affect our efforts. Every single person on the team makes a huge impact on the animals’ overall quality of life and helps bring families one step closer to having their lifelong companion.

I highly encourage everyone to visit their local shelter and volunteer, foster, donate, or maybe even adopt a rescued pet. You can save an animal’s life and give more of these stories happy endings too.