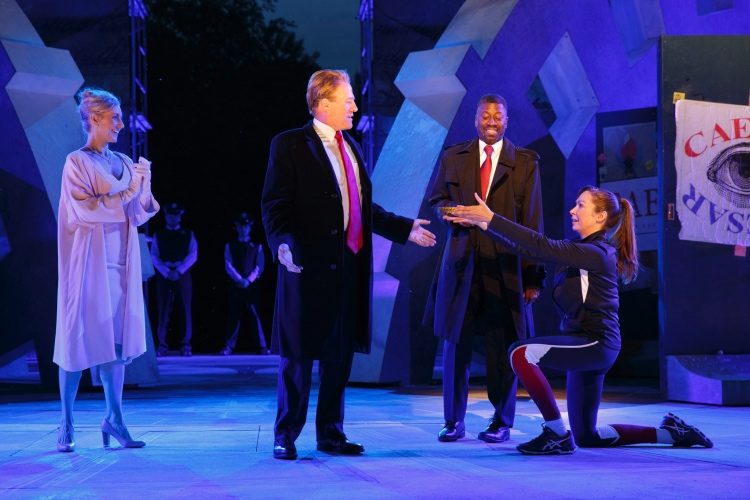 Holding up a Mirror: Theater in the Era of Trump

November of 2016: the country had just endured one of the most divisive presidential elections in its history, resulting in the promotion of Donald Trump to the presidential office. It was at this time that Oskar Eustis, the artistic director of New York City’s Public Theater, began to plan his production of Julius Caesar. It was a show which would divide people along political lines again, calling into question the play’s intent. After all, the production dressed Caesar up in a suit and long red tie, a clear reference to Trump, before depicting his bloody death in the third act.

When a video of the death scene was leaked online, it led to a political uproar. As Laura Sheaffer, a sales manager for Salem Media, put it in a radio interview with Joe Piscopo: “I don’t love President Trump, but he’s the president. You can’t assassinate him on a stage.”

Conservative media all around the country joined in Sheaffer’s cry, from Newsbusters to Fox News, and the debate was political from the start. Delta Air Lines and Bank of America eventually withdrew their financial support of the Public Theater, while many other sponsors made efforts to distance themselves from the production. The Public Theater itself released apologetic statements but stood by the play. In the words of Eustis:

“Julius Caesar can be read as a warning parable to those who try to fight for democracy by undemocratic means. To fight the tyrant does not mean imitating him.”

Eustis argued that the play did not condone violence against Trump; if anything, it condemned it through the harsh treatment of the conspirators. Regardless of the stance, however, the production proved to be provocative, prompting discussions over the ethics of political speech on the stage. In some ways, this outcome could be seen as exactly what Eustis would have hoped to incite. After all, his defense of provocative theater is that:

“When we hold the mirror up to nature, often what we reveal is disturbing, upsetting, provoking things. Thank God. That’s our job.”

Indeed, theater often does mirror reality back at us, sometimes in unexpected ways. Take the play The Jungle, a new London-born play which debuted in St. Ann’s Warehouse in Brooklyn on December 4. The play is set in a refugee camp in Calais, France, known as “The Jungle.” Several of the actors in the show are former inhabitants of the camp, including one of three men who were almost unable to enter the United States.

Moein Ghobsheh, Yasin Moradi and Ammar Haj Ahmad all faced difficulties getting visas due to Trump’s travel ban on certain the Muslim countries. The actors, two of whom are from Iran and one of whom is from Syria, portray stories similar to their own onstage, and the production team was reluctant to put on the play without them in New York. It took months of applications and the intervention of celebrities, religious leaders, and politicians to get the actors’ visas. Eventually, however, they were accepted into the United States.

The depiction of refugee life on an American stage is already political given the recent debates over immigration. The Sunday Times called the play “A significant event in which theatre shakes hands with the world.”

Indeed, the stories the actors tell in the play speak volumes about the global refugee crisis, which the United States, by virtue of its size and power, is implicated in. Taking a step back, however, the politics around the production amplify the voices of its actors. The initial visa denial showcases the struggle of representing certain stories onstage, perhaps highlighting a streak of fear within our current political climate.

After all, placing a president in the title role of Shakespeare’s Julius Caesar is not original to the Public Theater. The 2012 production of the play done by the Acting Company at the Guthrie Theater in Minneapolis featured a Caesar with similarities to Barack Obama. The character was not a copy of the president, but the similarity was strong enough that audiences did make the connection. At the time, there was no controversy surrounding the reference. In fact, the American Conservative called the production “riveting.”

In the wake of the backlash against the Public Theater, however, the Guthrie production was pulled into the debate as many asked ‘why now?’ While the difference in the audience reactions between the two productions was mainly used to discredit the outcry of the right, perhaps it, like The Jungle, has something to say about a changing political climate in the United States.